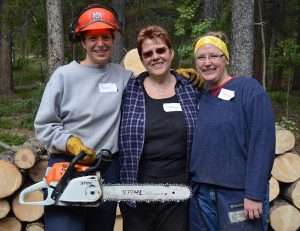 Coal Creek Canyon Saws and Slaws volunteers helped Gilpinites in the Wheeler and Mt. Meadow subdivisions with fire mitigation on Saturday, September 13. More than a dozen workers from Saws and Slaws, along with property owners and their volunteer friends, arrived at 7:45 a.m. and took down about 100 trees on four properties in just four hours.

Everyone took a break around noon for a community potluck. After lunch, the workers wrapped up with slash hauling and wood chipping.

Carole Cardon, who lives off South Beaver Creek Road, coordinated the event with her neighbors and Saws and Slaws. Julie Ikler, a member of the Mt. Meadows Fire Mitigation Committee, hosted the potluck.

Saws and Slaws is short for “chain saws and cole slaws,” referring to the tree cutting and the eating. The organization is a group of mountain folk who help homeowners once a month to mitigate fire danger around their homes. There is no cost to the homeowner for Saws and Slaws’ labor, although there may be associated costs for slash removal. Neighbors usually pool their money to rent a chipper or haul away the slash themselves. The group has passed on their program to Nederland and Sugar Loaf.

Cardon said that a main goal of last Saturday’s event was to encourage Gilpin residents to start a Saws and Slaws group. Her own job commitments don’t enable her to head up such a group, but she advised, “We’re encouraging community champions who are willing to take on putting a new group together in Gilpin County.”

Three of the neighbors received a Gilpin County Fire Mitigation Grant, which Cardon said reimbursed them for half of their mitigation costs, up to $2,000. For further information about the grant, interested parties may visit timberlinefire.com.

Forestry contractor Scott Deyo of Beaver Envy in Rollinsville hauled slash to the Gilpin County slash site. Cardon advised that the county agreed to give the group free slash service because they were doing fire mitigation.

It’s up to the homeowners what they want to do with the wood that is taken down. Some burn it for heat, others haul it to the Gilpin slash site, and some run it through the chipper and spread it on their yards.

Saws and Slaws volunteers are enthusiastic about the work they do. Volunteer Peggy Stevens, who got her chainsaw for Valentine’s Day a year ago, noted, “I really enjoy helping people mitigate their property. It’s a great workout and feels good to help others.”

Rebecca Jessep took the Saws and Slaws chain saw safety course last February and went on her first volunteer mitigation job in March. Jessep got involved out of necessity. “I was afraid of chain saws,” she admits, “but I needed mitigation on my property.”

The potluck was a welcome break from sawing wood. Folks gathered at Julie Ikler’s house for burgers and brats, chili, “what you see is what you get” soup, and – of course – coleslaw.

“I got involved with the group through the grant,” he said. “Timberline is very excited to see this kind of community involvement in a high fire-risk area, and we hope it continues to happen. This is the only effective way to do mitigation, because it’s not just about what you do with your house, but what your neighbor does with theirs, too.”

END_OF_DOCUMENT_TOKEN_TO_BE_REPLACED

Where the dead get to tell their story By Jaclyn Schrock On Saturday, August 21, the Gilpin Historical Society held their annual Cemetery Crawl. Tickets allowed the shuttle of hundreds of guests from the Teller House parking lot to the Cemetery. Depending on v... END_OF_DOCUMENT_TOKEN_TO_BE_REPLACED