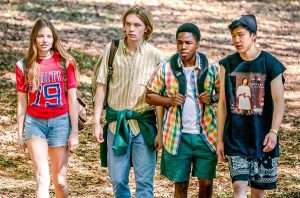 What happens when you bring reality into a coming of age story? You may get something akin to “Looking for Alaska,” an eight-part mini-series now streaming on Hulu based on the critically acclaimed and controversial book by John Green. The book, and consequently the mini-series, is controversial due to its depiction of sex, smoking, and vulgarity; the trifecta of the teenage experience. Green pulls no punches on how many teens view and participate in each of these three which makes his work both compelling and real, also accosted with hostile reactions from more conservative parents and educators. Even though this book has been banned from several school districts and libraries, the story is useful in giving readers a foundation for hope and strength when their world falls apart. John Green is the author of several young-adult novels including “The Fault in Our Stars” and “Paper Towns.” With movie theaters not opening until possibly the middle of 2021, I decided to check out this highly rated mini-series for myself and after the first episode, I was intrigued by the story and the characters and binged the remaining seven one-hour episodes in three viewing sessions. I have never read the book, so this commentary comes from the bias of the Hulu mini-series only.

Miles Halter, played by Charlie Plummer (“Granite Flats,” “Boardwalk Empire”) is a sixteen-year-old living with his sister and parents somewhere in Orlando, Florida who has a fascination with the final words of people before they die. Instead of returning to the local public school, Miles decides to attend the Alabama boarding school his father graduated from, Culver Creek Preparatory High School, where he finds friendship with Chip “The Colonel” Martin, played by Denny Love (“Empire,” “Lucifer”). The Colonel gives Miles the nickname “Pudge” which Miles adopts and continues to be called by this nickname for the rest of the series. The Colonel introduces him to Takumi Hikohito, played by Jay Lee (“The Filth,” “American Vandal”), a video-game addict who gets sidelined for much of the story, and Alaska Young, played by Kristine Froseth (“The Society,” “The Truth About the Harry Quebert Affair”) an impetuous girl who exhibits symptoms of trauma and rebelliously acts out by smoking, drinking, and dating a man in college. Her joie de vivre is infectious, and Pudge immediately crushes on her. Together, the foursome pulls off several pranks on the Weekday Warriors; the group of students whose station in life allows them the ability to leave campus every weekend to stay in summer homes. The Weekday Warriors prank right back resulting in an escalation until one prank goes too far. The Colonel has one rule for his friends; that they never snitch, but when that rule is broken, blame runs rampant and the friendships are torn apart until an unexpected tragedy and one final prank pulls them together.

The story of Pudge reflects the author’s own childhood experience. John Green lived in Florida and went to a boarding school in Alabama where he met a girl whose attitude and experience mirror Alaska Young. The language, smoking, and sexual attitudes most likely reflect his own experiences; the question is was it necessary for the sake of the story? Kudus to Hulu for adding “If you or someone you know is struggling with smoking or drinking, visit hulu.com/looking-for-alaska-resources for help with these issues and more” after every episode.

The series is rated TV-MA for sex, nudity (one male bum), alcohol, smoking, and profanity. There is an overuse of the f-bomb (my opinion); and yes, teens really do talk like that (at least they did in my school), but for storytelling, I don’t feel it is necessary to insert it as often as they did. The sexual encounters lingered long enough to satisfy the voyeuristic desires of certain viewers but did little for the sake of the plot. It was enough to know it happened, we don’t need to see, or even hear, as much as was depicted. Alaska drinks enough to be a functioning drunk; even one of the boys comments he is never sure when she is drunk or not. Fortunately, this becomes a critical plot point later in the series with a message that heavy drinking is dangerous and discouraged.

The series is primarily seen through Pudge’s experience and he is looking for his “great perhaps” based on the last words of an obscure French poet, Francois Rabelais, a writer of satire, the grotesque, bawdy jokes, and songs. Pudge is offered the chance to lose his virginity which he readily accepts, he hesitantly tries smoking (ends up smoking quite a bit), and has no problems drinking alcohol. He is looking for life experiences which he finds plenty.

The Colonel is a scholarship kid and we get a glimpse into his poverty-stricken household, which his single mother has fully accepted and finds her joy in her Christian faith and the little things in life.

Their favorite teacher, Dr. Hyde, played by Ron Cephas Jones (“This Is Us,” “Luke Cage”) teaches religious studies, and finds comfort in Buddhism. He is a gay man who lost his partner several years ago, but still mourns his passing.

Suicide is briefly considered as a cause of the great tragedy and is never truly ruled out.

The students find that if they focus on their similarities and common interests, they can discover strength, courage, understanding, and hope.

Typical of so many coming of age stories, there seems to be very little adult supervision or consequence except when the plot requires it.

The first couple and final couple episodes are well paced and filled with enough intrigue for a great story with a lot of depth. Unfortunately, having eight episodes to tell the story of the book was a bit long and led to some episodes feeling stretched for time. The story, although based on Green’s reality, was predictable in its obstacles and outcomes. There were three outstanding acting performances from Kristine Froseth, Denny Love, and Ron Cephas Jones, but the lead, Charlie Plummer, seemed flat and I never really cared whether he found his “great perhaps” or not. Jay Lee showed a lot of possibility with Takumi, but his character never had his own storyline for him to shine.

“Looking for Alaska” is a good, not great, series that had adequate entertainment value for killing a few hours. I do not regret watching it and the story will stick with me for a while; however, I have an unfortunate bias of reading another young adult book which goes far deeper with a strong message that should be shared. At times, I confuse the heroine of my other novel with Alaska’s story, then get disappointed when I realize the great things I remember come from the book. I think that says it all. “Looking for Alaska” is a good story, but probably will not stand the test of time and will fade into obscurity (sorry John Green). Perhaps the book is better? My beloved wife rates the story two out of five firework distractions, and I rate it two-and-a-half out of five bottles of cheap wine.

END_OF_DOCUMENT_TOKEN_TO_BE_REPLACED

Where the dead get to tell their story By Jaclyn Schrock On Saturday, August 21, the Gilpin Historical Society held their annual Cemetery Crawl. Tickets allowed the shuttle of hundreds of guests from the Teller House parking lot to the Cemetery. Depending on v... END_OF_DOCUMENT_TOKEN_TO_BE_REPLACED