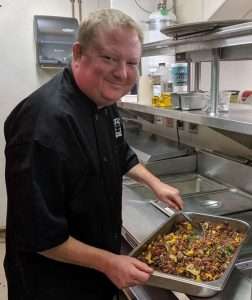 Joe and Kara Tinucci were privileged to open a family-friendly eatery inside the historic Teller House last October 2018; however, running the restaurant through the summer would be conditional upon proving they could serve upscale food at an affordable rate during the opera season. The restaurant in the Teller House has long been used by the Central City Opera in conjunction with their matinee performance, but the contract with the previous caterer was not renewed, so the Opera began the search for a new provider of fine food. With JKQ already in the building, it was only natural that owners Joe and Kara be considered and the Tinucci’s solution was to bring in a friend with the finesse to orchestrate fine dining, Chef Chris Herrin.

Chef Chris began his culinary career working in the kitchen of a bakery and café in Michigan at the impressionable age of fourteen. Inspired by the dance of doughy delicacies, he went to culinary school and got a job working in the Rainbow Room, a private event space on the 65th floor of 30 Rockefeller Plaza (yes, that “30 Rock,” also home to “Saturday Night Live”) in mid-town Manhattan. Shortly after, Herrin moved to Las Vegas and spent seven years working under three-star Michelin Chef Thomas Keller in Bouchon at the Venetian whom he considers his culinary mentor. Chef Chris then opened his own restaurant, Bread and Butter, in Henderson, Nevada. Herrin has since sold Bread and Butter (which later closed) and spends his time working on special projects around the country, so when Joe and Kara told him about a summer gig in Central City, he jumped at the opportunity.

Chef Chris will be working exclusively on menus for the Central City Opera’s Lunch and Song performances (every Wednesday and Sunday) only through the opera season, and so far, the food has been getting positive reviews. “Much better than last year” one patron (who chose to be anonymous) remarked. Chef Herrin said his goal is to make good food that matches the entertainment. When asked about his future plans, he stated “I want to come back, this could be my summer residence.” He loves the JKQ BBQ Restaurant saying it is like working at “Cheers in the mountains,” and it “feels like you’re being hugged by mom and dad” when coming here. He commented that Joe and Kara are truly community oriented and will hire people to give them an opportunity; from the young to the inexperienced to those struggling to find a job. Herrin reflected that Central City “is a beautiful city” and it is nice to find a unique eatery. Chris said that everywhere he goes, he can pull off the highway and find a familiar restaurant that exists in almost every town. “There is nothing wrong with that,” said Herrin, “but getting off the road and finding a real mom and pop place is a real treat.”

Fitting right in with the community oriented Tinucci’s, Chris has taken on an apprentice, Chef Rachel, who recently graduated from a culinary apprenticeship. “She’s great, she grew up here and knows the area,” said Herrin, “she’s exactly the kind of person this area needs.” Chris stated that some of the best chefs he’s known went through apprenticeships instead of traditional culinary school, including Chef Thomas Keller, and he predicts that Chef Rachel will have a successful place of her own in the next ten years.

JKQ BBQ continues to thrive in Central City and shows no signs of stopping. Although known for their excellent street fare, they have stepped it up for the Central City Opera. If you are lucky enough to attend a lunch and song, be sure the give kudos to Chef Chris Herron and give your feedback to the owners.

END_OF_DOCUMENT_TOKEN_TO_BE_REPLACED

Benefitting the county, schools, and much more By Don Ireland   This year marks the 30th anniversary of casinos opening in the former little mining towns of Black Hawk, Central City and Cripple Creek, Colorado. In those early years, smoking was allowed inside ... END_OF_DOCUMENT_TOKEN_TO_BE_REPLACED

Benefitting the county, schools, and much more By Don Ireland   This year marks the 30th anniversary of casinos opening in the former little mining towns of Black Hawk, Central City and Cripple Creek, Colorado. In those early years, smoking was allowed inside ... END_OF_DOCUMENT_TOKEN_TO_BE_REPLACED