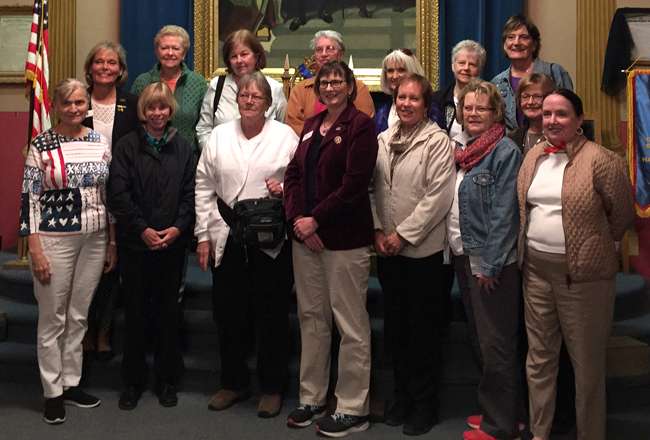 Mountain Rendezvous Chapter gives back to our community

Our Gilpin County first responders do a great deal to keep this community safe and running smoothly. Many of them are volunteers and are our friends and neighbors.

With this in mind, the Mountain Rendezvous Chapter of the Daughters of the American Revolution (DAR) in Evergreen took time last year — October 2016 — to reach out with goodie baskets and thank-you notes for members of the Gilpin County Sheriff’s Office and Timberline Fire Protection District. The baskets included chips and salsa, hummus, popcorn, trail mix, cookies, home-baked banana bread, and protein drinks. The treats were the group’s way to show appreciation for the many services our first responders provide.

“Every October, we have our national day of service to correspond with the day of our founding,” Mountain Rendezvous Chapter Regent Cheryl Lydyard explained.

She reported the day of appreciation in the October 13, 2016 issue of the Weekly Register-Call and also submitted photos and information about the chapter’s gesture to American Spirit magazine, the national DAR’s bimonthly publication. She began to hear back from magazine staff several months later, in April or May of 2017. There are thousands of chapters around the country whose events the magazine considers, and it takes time to include the top stories in only six issues per year.

At last, the Evergreen group’s patience was rewarded when they were recognized in the current November/December 2017 issue. The magazine shone a spotlight on the chapter’s good deed with an article featuring these DAR volunteers who gave back to our community.

The story acknowledged that responders in rural mountain areas often contend with the challenges of high altitude, unpaved roads, shortage of water supplies, and weather extremes.

Half of the women in the group visited the Sheriff’s Office at the Gilpin County Justice Center, and the other half went to Timberline’s station 3 on Highway 46. Both agencies were thankful to receive the treats and the words of appreciation. The DAR volunteers who participated were Bobbie Reitz, Pat Hunt, Kay Lorenz, Marlene Waltz, Kathleen Schrader, Coni Osborn, Mary Agnew, Linda Flanagan, Cheryl Lydyard, Sue Dunlop, Marcia Zeeb, and Mary Steinbrecher.

The DAR chapter intends to repeat its efforts to honor local first responders with more appreciation days in the future.

“We like to compare our first responders to militiamen during the Revolution,” Lydyard said in American Spirit. “They are always ready to defend the community, their homes and their neighbors’ homes.”

Daughters of the American Revolution, founded in 1890 and headquartered in Washington, D.C., is a non-profit, non-political volunteer women’s service organization dedicated to promoting patriotism, preserving American history, and securing America’s future through better education for children. Its members across the U.S. volunteer millions of service hours annually in their local communities, supporting active duty military personnel and veterans, awarding student scholarships, and many other services.

According to dar.org, the DAR has 185,000 members in 3,000 chapters across the United States and internationally. Any woman 18 years or older, regardless of race, religion, or ethnic background, who can prove lineal descent from a patriot of the American Revolution, is eligible for membership.

END_OF_DOCUMENT_TOKEN_TO_BE_REPLACED

Where the dead get to tell their story By Jaclyn Schrock On Saturday, August 21, the Gilpin Historical Society held their annual Cemetery Crawl. Tickets allowed the shuttle of hundreds of guests from the Teller House parking lot to the Cemetery. Depending on v... END_OF_DOCUMENT_TOKEN_TO_BE_REPLACED

Benefitting the county, schools, and much more By Don Ireland   This year marks the 30th anniversary of casinos opening in the former little mining towns of Black Hawk, Central City and Cripple Creek, Colorado. In those early years, smoking was allowed inside ... END_OF_DOCUMENT_TOKEN_TO_BE_REPLACED