Living with bears and moose 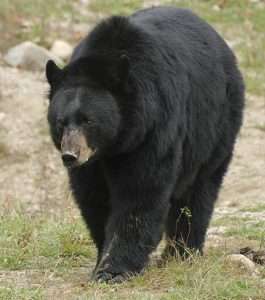 Have you seen a bear or moose cross your yard this summer? If so, the sight can be both exhilarating and frightening. It’s important to know how to live with wildlife, for their benefit and ours.

A workshop on living with bears and moose was led by Megan Barton of Colorado Parks & Wildlife (CPW) and hosted by Gilpin County’s CSU Extension Agent, Irene Shonle, at the Gilpin County Fair Barn on August 5.

Barton is the Visitor Center Manager at Golden Gate Canyon State Park on Crawford Gulch Road. Gilpin County has been home to bears for years, but moose are relatively new here. Barton said the park has received several calls this summer reporting bear and moose sightings, noting that wildlife need food, water, shelter, and space, all of which are amply supplied in Gilpin County.

Barton explained that the only type of bear in our area is the black bear. Interestingly, they are not always black, but can be brown, cinnamon, or blond as well.

Male bears, or boars, average 250 pounds, and female sows about 150. Bears hibernate from mid-November through April. When they get done hibernating, they are starving and ready to start eating! Their calorie requirements are huge, and by fall, when they are once again packing on the flab for winter, they need up to 20,000 calories per day. That’s a lot of berries and insects, their usual fare.

Sounds pretty intimidating, but bears are afraid of humans. Unless we get in their space or they think their cubs are in danger, they probably will turn and go the other way in an encounter. Typical bear behavior is to investigate, perhaps rising on their hind feet to check us out. If a bear clicks his teeth, that’s a signal that he feels uncomfortable. He may bluff a charge and run at you, not intending a real attack.

Don’t turn your property into the “golden arches.” Bears have 100 times a human’s sense of smell and are attracted by food odors. They will try to save energy hunting for food if humans’ garbage is available, and once they find an easy source of calories, they will return. Then they may become “problem” bears, dangerous to humans. They can do a lot of damage and become aggressive, and accordingly, may have to be destroyed. Relocating problem bears seldom works, because they usually make their way back.

Keep trash safely locked in your home or garage. Heavy wood or metal buildings or enclosures are best. Wait until the morning of collection or a trip to the dump to put out trash.  If it will be a few days till you’re ready for trash pick-up, put food scraps in the freezer.

Ordinary fencing around a dumpster won’t keep them out, as they are great climbers and diggers. Dumpsters should have at least a chain-link “roof,” a concrete pad bottom, and a locking gate.

Feed birds only when bears are hibernating, or bring feeders in every night while bears are active. Consider providing flowers rather than a feeder for hummingbirds.

Store pet food and livestock feed inside a secure area.

Place ammonia-soaked rags by trash cans to deter bears. Try an electric fence, or place an “unwelcome mat” in front of bear-accessible areas, made of sturdy plywood that has been carefully studded with small nails pointing up. Install these properly to avoid injuring animals or people, and put up a sign telling folks they are in use.

Keep food and other scented items, even gum wrappers, out of your car. Lock cars that are parked outside; a bear can get in and be unable to get out, causing a lot of damage.

Before letting your dog out, scan the yard to check for animals.

While out walking, make noise by talking or wearing bear bells. Carry a walking stick and bear spray or pepper spray.

CPW introduced twelve moose at North Park near Walden in the 1970’s. Since that time, additional moose have been brought to that area, and the moose have increased in numbers and expanded their range.

Moose love water and marshy areas, but they dislike heat, so they prefer being active in the early morning and dusk. They weigh 600 to 1,400 pounds and stand six feet tall at the shoulder, with dark brown fur. Their bulbous nose, long legs, and distinctive dewlap or “bell,” the long flap of skin that hangs beneath their lower jaws, give them an ungainly appearance. Males grow antlers that can be up to five feet wide and weigh 15 to 20 pounds each.

Barton cautioned that moose have the potential of being very dangerous. Rutting season, when the males (bulls) vie for mates, occurs during September-November. Both bulls and cows are aggressive during this season. Bulls often fight head-to-head until one is injured or even killed. Cows protecting their young can be very fierce.

Signs of a moose’s presence include hoof prints, droppings, and browsed willows. Like bears, moose need their space and can get very territorial, charging if you’re too close. Moose may look clumsy, but they can run up to 35 mph. Dogs remind moose of their main predator, the wolf; therefore, a moose has the instinct to attack any dog. Never let a dog chase a moose.

Responding to an Encounter

If you meet a bear or moose, give it space and an exit route. Remain calm, and use the SMART acronym devised for children:

A – Announce loudly, “Leave me alone!”

R – Retreat. Back away slowly.

Bear attacks are rare, but if you are attacked, fight back. If a moose charges, hide behind a tree or other large object. If you are trapped in your house, bang on pots and pans to create noise that may scare a moose off.

Wildlife officials need us to help protect ourselves and wildlife. Here’s how:

Stash your trash. Share bear-proofing information with your neighbors. If your neighbor’s trash attracts bears, tell them you’ve noticed and create a little peer pressure. Join CPW’s Bear Aware trained volunteers and chat with your neighbors about how to co-exist with bears. Supervise young children and teach them how to respond with the SMART acronym.

We can choose where and how we live. Wildlife cannot. Reducing conflicts requires controls on human actions – where we build, how we landscape, the way we dispose of our trash and house our pets.

For questions or concerns about wildlife, call the Golden Gate Canyon State Park Visitors’ Center at 303-582-3707. In an emergency, call 911. To learn more about wildlife or the Bear Aware program, visit cpw.state.co.us.

END_OF_DOCUMENT_TOKEN_TO_BE_REPLACED

Benefitting the county, schools, and much more By Don Ireland   This year marks the 30th anniversary of casinos opening in the former little mining towns of Black Hawk, Central City and Cripple Creek, Colorado. In those early years, smoking was allowed inside ... END_OF_DOCUMENT_TOKEN_TO_BE_REPLACED

Where the dead get to tell their story By Jaclyn Schrock On Saturday, August 21, the Gilpin Historical Society held their annual Cemetery Crawl. Tickets allowed the shuttle of hundreds of guests from the Teller House parking lot to the Cemetery. Depending on v... END_OF_DOCUMENT_TOKEN_TO_BE_REPLACED