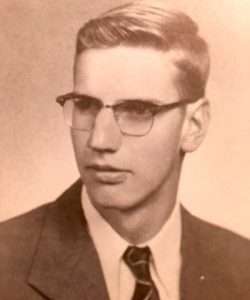 Linold Nels Begg was born to Linold James Begg and Elizabeth Louise Thompson in the Krell house on Dory Hill Road in Black Hawk, Colorado. The family moved to the present home on Lawrence Street in Central City in 1941 where he was a life-long resident of 76 years with exception of two years he served in the US Army in Germany and was honorably discharged in 1964.
He attended Clark Grade School and graduated from Gilpin County High School in 1958, where he was a member of the track and basketball teams and on the annual staff.
He, his sister and brother, as kids, started the School Parking Lot and the family operated the lot for some 18 years.
As a teenager, Linold worked as a parking lot attendant at the Jenkins and Jake lots and later was in business with his father and brother building retaining walls and construction in Central City.
In the 60’s Linold helped his father and residents repair and develop the present Central City Fire Department building and location and later served as Fire Chief.
After his military service he was employed by the State of Colorado in road maintenance and plowed snow for 23 years for the residents of Gilpin County.
He was a lifetime member of the Elks, member of the Methodist Church, Commander of the VFW, and was instrumental in the installation of the Veterans Memorial at the Justice Center.
Linold was taken ill in August and moved by his brother to Wichita, Kansas where he was later admitted to the VA and was united with our Lord on December 8.

He was preceded in death by his father, mother and four brothers. Survived by brother Arthur (Danny) Begg of Wichita, Kansas; sister Catherine Veronica Monahan (Pat) of Herndon, Kansas; and many cousins, nieces nephews and friends in Central City and Black Hawk.
A memorial service will be held at the Fort Logan National Cemetery in early summer for internment.
Any remembrances of Linold should be sent to Hospice, at the Robert Dole VA Center, 5500 E. Kellogg Ave, Wichita, KS 67218.

END_OF_DOCUMENT_TOKEN_TO_BE_REPLACED

Benefitting the county, schools, and much more By Don Ireland   This year marks the 30th anniversary of casinos opening in the former little mining towns of Black Hawk, Central City and Cripple Creek, Colorado. In those early years, smoking was allowed inside ... END_OF_DOCUMENT_TOKEN_TO_BE_REPLACED