“Life is a highway” and Gilpin grads are moving on down the road! 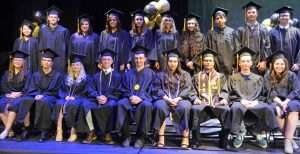 “Success is not final, failure is not fatal; it is the courage to continue that counts.” Winston Churchill. That was the motto of the Class of 2019 as they took the stage on Saturday, May 18, to celebrate four years of high school and claim their precious diplomas. The class flower was the hydrangea, the class colors navy blue and white, and the class song “Life is a Highway” by Rascal Flatts.

All rose as the seniors took their processional walk to “Pomp and Circumstance.” Students, secondary school staff, the Gilpin County Board of Education, parents, and other guests faced the flag during the playing of the “National Anthem.”

Everyone settled into their seats as Secondary Principal Alexis Donaldson welcomed the assembly. “Class of 2019, this is your day. Sit back and enjoy it!” she said.

Superintendent David MacKenzie provided a brief history of Gilpin County and Gilpin High School and recognized past alumni from 1966 through 2018, who stood to receive the audience’s applause.

Senior Cheyenne Cowles introduced the commencement speaker, Central City Mayor Jeremy Fey. Fey advised the students, “Every adult in this room will tell you that all the money in the world won’t bring happiness; you must pursue your passion.”

He went on to encourage the young men and women to remember the Golden Rule – “treat others the way you want to be treated.” He also said, “All you can take with you is that which you have given. Since you were born, the world has seen both good things and bad things, like the founding of Facebook and 9/11. What will your generation contribute to the future? Class of 2019, go make us proud!”

Following the mayor’s comments, senior Will Lorenz presented the senior class gift, $200 for updates to the gymnasium.

Salutatorian Anna Yocom told the crowd how in previous years she envisioned herself in cap and gown, striding proudly across the stage, and how she thought that would be the end.

“That was a mistake,” she admitted. “What are we done with? High school is only a short period of our lives. Now it’s time to start the next chapter, the second verse of our song.”

She agreed with a keynote speech given in 2012 by Massachusetts English teacher David McCullough, Jr., who told his graduating class, “You are not special.”

Valedictorian Chad Holmes thanked his family for their unconditional love and support and expressed gratitude to the teachers who supported the class members on their high school journey.

“The crossroad of life is upon us,” he said. “The time to pursue our aspirations and our dreams is here. The opportunities are endless. Class of 2019 and members of the audience – now it’s time to live our lives and start being ourselves.”

School counselor Kim Cobb announced the scholarships received by each of the young men and women. Altogether, the Class of 2019 received $244,700 in financial awards.

Senior Courtney Holmes invited her classmates to honor the special people in their lives with blue carnations. As the songs “All For You” by the rock band Sister Hazel and “Don’t Blink” by Kenny Chesney played, the seniors moved through the crowd, presenting the blooms to family members, teachers, and friends who had helped them on the road to success.

The senior slide show followed, with a medley of photos of each student from early childhood to the present.

Craig Holmes, President of the Gilpin Board of Education, presented the diplomas. He had the privilege of awarding two of the documents to his own son Chad and daughter Courtney. As Principal Donaldson called each name, the graduate marched across the stage to claim that long-awaited piece of paper, pose for a photo, and shake hands with each school board member.

The ceremony culminated with the presentation of the graduates. As is tradition, tassels were shifted from the right to the left on the mortarboards, the class was introduced, and caps tossed skyward with a jubilant shout. A reception followed in the jam-packed atrium, where there was a whole lot of hugging, smiling, crying, and hand-pumping going on.

Class of 2019, continue with courage!

END_OF_DOCUMENT_TOKEN_TO_BE_REPLACED

Benefitting the county, schools, and much more By Don Ireland   This year marks the 30th anniversary of casinos opening in the former little mining towns of Black Hawk, Central City and Cripple Creek, Colorado. In those early years, smoking was allowed inside ... END_OF_DOCUMENT_TOKEN_TO_BE_REPLACED

Benefitting the county, schools, and much more By Don Ireland   This year marks the 30th anniversary of casinos opening in the former little mining towns of Black Hawk, Central City and Cripple Creek, Colorado. In those early years, smoking was allowed inside ... END_OF_DOCUMENT_TOKEN_TO_BE_REPLACED