Life after being struck by lightning 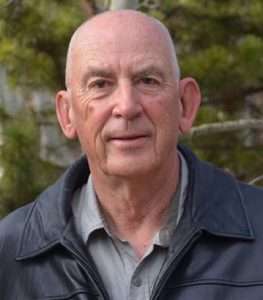 It’s the most wonderful time of the year, so the song says. But most of us are swamped with busyness and just wondering how we will survive this wonderful time. Maybe it’s because we don’t pause long enough to let ourselves feel awe in the real sense of the word: an overwhelming feeling of deep inspiration, reverence, and respect.

For a local man, Jerry Leenheer, the most wonderful time of 2015 came not during the holidays, but last July, when he got struck by lightning, technically died – and felt he was resurrected. Now, he is filled with awe for the way he believes God caused him to survive and wants to share his experience, as well as what he has been doing in the months after the strike. Here is the first part of his story. Be sure to see next week’s edition for the uplifting conclusion.

Jerry, accompanied by his dog Josie, was out trimming trees for fire mitigation on July 15. The weather was not threatening. In fact, there were only a few small clouds in the sky. Even so, a firebolt snaked from the sky, striking the tree he was working on and searing a scar down the trunk to twenty feet above the ground. It jumped from the tree to Jerry’s head and neck and traveled down his body to strike the dog, killing her. The bolt tore off the top of Jerry’s hat, blasted a hole in his shirt, and blew the ends out of his gloves. He neither heard nor saw a thing and was instantly unconscious.

Cora Jean was in the house and went to the window moments later to check on her husband. He was visible just under 300 yards away on their Douglas Mountain property in Jefferson County, and it looked to her like he was sitting down. It began to rain and hail, so she got their pick-up truck and drove out to him, intending to give him a ride back to the house. Then she saw that he was lying down and knew something was wrong. She got out of the truck and hurried to her husband.

He was flat on his back, staring into space, with no pulse. The dog was also lying without moving. Cora Jean began performing CPR on Jerry and periodically yelling for help. As she worked desperately, she prayed for God to send someone.

After fifteen minutes, a neighbor drove by. Cora Jean flagged him down and urged him to call 911, which he did. She returned to Jerry and kept doing CPR. Finally, he made some gurgling sounds. Then he began to breathe, rolled over, and sat up.

He had been technically dead for almost 30 minutes.

Jerry took a helicopter ride on Flight for Life to St. Anthony’s Hospital in Lakewood, where he stayed until being released on July 20. Incredibly, a full-body MRI was negative for body damage, and a CAT scan revealed no broken ribs from the CPR. His heart and brain are now fine. Painful burns on his hands and arms have healed. His right ear was deafened by the strike, but he has regained his hearing.

Jerry can’t remember the trauma of the lightning strike. “I don’t remember anything that happened, just disconnected faces praying for me, with brown fog around the edges,” Jerry relates. “I hardly remember being in intensive care, or being strapped down in bed and thrashing around, but my recovery was extremely rapid after that.”

The Leenheers are well educated and practical, and neither leans toward sensationalism. Jerry spent 36 years as a science researcher and project manager with the U.S. Geological Survey (USGS) at the Denver Federal Center before retiring about ten years ago. Cora Jean had worked as an analyst at the Center. Still, their scientific backgrounds don’t preclude them from feeling greatly amazed over what they see as a supernatural occurrence.

“I regard it as two miracles,” Jerry asserts. “The first was my coming back to life after thirty minutes of not breathing. The second was that the elders and deacons at my church came and prayed for healing on my head and my brain. I had first-degree burns over most of my head. Three days later they were gone.” There is no evidence of brain damage, Jerry emphasizes.

Since Jerry believed that God gave him a second chance at life, he wondered how he could live to please God more. One way, he decided, was to tell as many people as possible about what happened. The couple had immediate opportunities to share their experience as local, national, and international television and Internet news sites picked up the story.

Jerry also felt impressed to return to his old workplace and speak to his former colleagues, with whom he had kept in touch. They had him give a presentation on lightning safety in the Hazard Room at the National Training Center of the USGS. Jerry talked about lightning facts and survival and what science knows about it.

While it is possible to die from a lightning strike, many survive. However, even those revived with cardio-pulmonary resuscitation (CPR) are likely to suffer permanent memory loss, personality changes, or other problems.

“People who have CPR administered for less than ten minutes are likely to survive,” Jerry told the group. “After 15-20 minutes of CPR, a person could survive but is likely to sustain nerve and brain damage. If the person comes back after half an hour of CPR, you need to ask yourself if you want the person to come back, because you won’t really get them back. I was in the third group.”

Jerry also learned that 70 percent of people who receive a direct hit are killed, and he was in that group also. He built a case for the scientists at the National Training Center of how unlikely it was that he was a survivor, and not just a survivor, but one with no residual brain damage. Toward the end of the talk, he brought out his personal beliefs. Some did affirm the miraculous nature of his experience.

In general, though, many call Jerry “lucky.” He says, “Even people in Gilpin say I’m the luckiest person they know. But I tell them I believe it is a higher power, and that makes them think. All I can do is tell my story. They can’t deny what happened, so if God is working on their lives, their cages will be rattled.”

The Leenheers have gone back to the pursuits they enjoyed before the lightning strike – spending time with their grandchildren, performing with the Peak to Peak Chorale, and doing a lot of bicycling.

In fact, before the lightning strike, Jerry had been planning to bicycle from coast to coast in several separate legs of 600-700 miles each. He had already completed the first segment of his trip last January, riding from Santa Monica Beach in California to Phoenix, Arizona. The second part of his journey took place in May, as he cycled on historic Highway 60 from Phoenix to Texico, New Mexico, a distance of about 650 miles. Jerry had planned a third jaunt across the Texas panhandle and Oklahoma to the Missouri border in October, but the lightning strike cast a shadow on that possibility.

Jerry was determined to see his journey through, if possible. His doctor did not allow him to ride for a couple of weeks after the lightning strike due to medications Jerry had to use. When he was at last permitted to cycle, the training turned out to be therapeutic, as riding on country dirt roads vibrated his arms and stimulated the nerves in his hands.

Finally, Jerry and Cora Jean were satisfied that he was fully able, physically and mentally, to ride. He began the next leg of the trip on October 12, this time with a new focus in mind.

Many people encountered this man with the remarkable story. In next week’s article, you’ll learn about the impact Jerry made. Until then…

END_OF_DOCUMENT_TOKEN_TO_BE_REPLACED

Where the dead get to tell their story By Jaclyn Schrock On Saturday, August 21, the Gilpin Historical Society held their annual Cemetery Crawl. Tickets allowed the shuttle of hundreds of guests from the Teller House parking lot to the Cemetery. Depending on v... END_OF_DOCUMENT_TOKEN_TO_BE_REPLACED