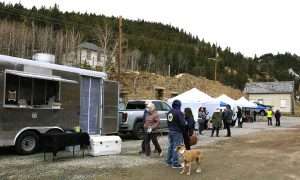 Starting May 9th through October

A new, misspelled open-air market has come to Central City – the Levit Street Market; organized by business partners Jeremy Fey and Jack van Son and backed by the Bates-Hunter Gold Mine. Jeremy Fey originally brought the idea to City Council as Mayor in a Work Session, but at the time, the City did not have the interest in or the discretionary money for funding the project (about $17,000), so he took matters into his own hands and found gold in the private sector.

Opening this Mothers’ Day, May 9, the Levit Street Market will operate every Sunday from 10 am to 2 pm and feature up to thirty vendors in arts, crafts, services, and food. The Market will continue to haunt Leavitt Street (original spelling) through Sunday, October 31.

Leavitt Street runs between Gregory and Lawrence Streets connecting the Bates-Hunter Mine and the houses just west of Heritage West Realty and Green Grass in Central City. The short road was closed by City Council several years ago in consideration of noise, dust, and air pollution as it was used by buses to idle between shifts. The street will open to the pubic on Sundays during the event. When asked why the odd spelling, Fey commented that you won’t find the ‘Leavitt’ spelling on Google or Apple Maps, but you will find ‘Levit.’ “I would rather people be able to find it, than to be historically accurate.”

Eighteen vendors signed submitted applications for the second Sunday in May, but due to inclement weather, many did not show. Not to worry, as the nice weather grows, so will the number of vendors. Those who braved the freezing temperatures and threat of snow include artists Julianna Korman, Lindsay Gianola, John Ishee and his girlfriend Wesli; food artists and connoisseurs Steven Tricarico, Brandon Johnson, Nakia, and JKQ BBQ.

Nakia is a Denver based chef offering a unique approach to food delivery services. Customers are given more than 100 recipes to meal plan and then her team of chefs will shop for all the ingredients, offer tips, and answer a help line. “Food connects us to our land, to our well-being, and to each other. It can bring us together and inspire us to do better,” states Chef Nakia. “I want everybody to feel confident and enjoy cooking and sharing meals as much as I do.”

Steven Tricarico specializes in coffee products bringing world-renowned LavAzza products to our small county from Torino, Italy. LavAzza has been in the coffee business since 1895; almost as long as Gilpin has been around.

Brandon Johnson is our local Central City chef who wants to share some of the flavors and sauces he loves with the community. He has perfected the recipes for tikka masala, Korean BBQ, sweet and sour, green chili, and curry lemongrass, available by the pint.

John Ishee and Wesli are originally from Alabama, but quickly fell in love with Colorado and are Central City residents. They created Shakedown Goods, named after a Grateful Dead song, “Shakedown Street.” Shakedown Street was the colloquial term for a row of vendors parked outside of Grateful Dead concerts where people would sell you food and trinkets to raise money for tickets. They offer homemade crafts for people and dogs.

Finally, no Central City open-air event would be complete without the presence of finely smoked meats by Joe and Kara Tinucci of JKQ BBQ. Joe was able to roll out his new food trailer purchased this January which brings the couple full-circle from their days in Las Vegas. Before leaving Vegas for the spectacular scenery and people of Colorado, they operated a food trailer and partnered with a restaurant. They left all that behind and started from scratch here in Central City with an open tent and grill, eventually partnering with the Central City Opera to operate out of the Teller House and now their own shiny food trailer for street events. Joe is particularly excited to start using a new grill that they will be picking up in the next few weeks. New dishes will be coming to Levit Street Market with his new grill.

The Levit Street Market is a unique experience and opportunity to bring this community together. Be sure to stop by next Sunday from 10 am – 2 pm and check it out!

END_OF_DOCUMENT_TOKEN_TO_BE_REPLACED

Where the dead get to tell their story By Jaclyn Schrock On Saturday, August 21, the Gilpin Historical Society held their annual Cemetery Crawl. Tickets allowed the shuttle of hundreds of guests from the Teller House parking lot to the Cemetery. Depending on v... END_OF_DOCUMENT_TOKEN_TO_BE_REPLACED

Benefitting the county, schools, and much more By Don Ireland   This year marks the 30th anniversary of casinos opening in the former little mining towns of Black Hawk, Central City and Cripple Creek, Colorado. In those early years, smoking was allowed inside ... END_OF_DOCUMENT_TOKEN_TO_BE_REPLACED