“Let’s take childhood back from cancer” 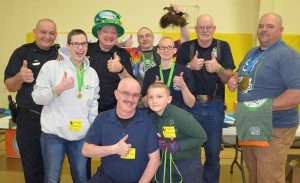 What does it take for a person to get their head shaved in front of an audience?

It takes self-effacing courage and a sense of humor – especially when the audience is a gym full of noisy school students. And when the local media shows up with a camera and asks, “Why are you getting your head shaved?” these special folks give gracious responses and allow their photos to be taken.

Ten brave souls parted with their hair last Thursday, March 15, in the Gilpin School’s old gym during a rally to raise money for St. Baldrick’s Foundation, an organization that exists solely to fund childhood cancer research. Students, first responder organizations, and community members banded together to raise money to donate to the organization.

Events such as the one at Gilpin are taking place all across the country this month, to coincide with St. Patrick’s Day. In fact, the first “St. Baldrick’s” event was held in 2000 at a St. Patrick’s Day party.

A banner with the green St. Baldrick’s logo hung in the school gym, proclaiming, “Let’s take childhood back from cancer!”

Why head shaving to raise money? “We shave because kids with cancer often lose their hair during treatment, and we stand proudly bald beside them,” the St. Baldrick’s website relates. The organization’s intent is to raise funds for lifesaving research so that childhood cancer may be cured.

The St. Baldrick’s Foundation is a volunteer and donor powered charity dedicated to raising money for lifesaving childhood cancer research and funds more in childhood cancer grants than any organization except for the U.S. government, states stbaldricks.org. Since the Foundation’s first grants as an independent charity in 2005, more than 500,000 people have had their heads shaved, and St. Baldrick’s has funded more than $234 million in over 12,000 events worldwide. More than $18 million has been raised so far this year.

Additionally, what started in the U.S. is now taking place in countries all over the world. When events take place outside the U.S., the Foundation creates a partnership with childhood cancer organizations in that country to ensure that funds raised in the area, stay in the area, to help children with cancer locally. Among the many countries holding St. Baldrick’s events are Bermuda, Hong Kong, United Kingdom, Japan, Singapore, and Australia.

Sgt. Kevin Armstrong of the Gilpin County Sheriff’s Office coordinated the Gilpin event. Last year’s event, the first one to be held at Gilpin, raised $5,200. The goal for this year is $7,000, and Armstrong said $3,800 had been raised at the time of the event. As of Monday this week, enough was coming in that $6,000 should be surpassed, Armstrong reported.

Gilpin students deposited donations in special buckets placed at the school. Patrons of EaglesMart (the school district’s convenience store in Black Hawk) and Base Camp campground could donate at those locations.

Participants could also sign up at St. Baldrick’s website and get sponsors among family members, friends, and acquaintances who would donate in their name. They could join a team or sign up as individuals. Those raising $50 or more received a 2018 St. Baldrick’s t-shirt. Armstrong advised that although the Gilpin event is done, donations may continue to be made at stbaldricksorg.

Armstrong said 2018 was his tenth year to coordinate a St. Baldrick’s event. He did so for eight years as a member of the Wheat Ridge police force and again last year at Gilpin. Although he has usually gotten his head shaved in the past, he bowed out this year, as his daughter is graduating from Gilpin High School in May and wanted her dad to have a full head of hair for the occasion.

He kicked off the head shaving with a call to action for the students.

“Do what you are passionate about,” Armstrong urged. “Find a way to get involved. We will all be better off.”

Armstrong told the students that his passion for this cause began in 2000 and related some eye-opening statistics about children’s cancer. Every two minutes, he said, a child is diagnosed with cancer. Two out of three suffer long-term effects from their treatment and cancer drugs. In the U.S., one person out of 285 will be diagnosed with cancer before the age of 20.

In 1959, Armstrong said, most children with cancer died. Now, the survival rate is 90 percent.

“For some, there is no cure; more research is needed. There are more than 12 types of childhood cancer and countless subtypes.”

Most research done by the government goes to adult cancers, while only 5 percent goes to childhood cancer research.

Armstrong had a few special acknowledgments. Joe Stranaly of the Gilpin County Sheriff’s Office was the top fund-raiser with $1,500 and was awarded with a medal and t-shirt. Secondary Principal Alexis Donaldson accepted a St. Baldrick’s plaque on behalf of the school for its participation. Armstrong also recognized Gilpin student Aiden Zeilbeck, a St. Baldrick’s ambassador child. He was diagnosed with cancer in 2012 and has been cancer-free for the past three or four years.

Following Armstrong’s remarks, the main event began. Barbers Denise King and Bethany Truck of Sports Clips in Evergreen, who donated their time, got their clipper at the ready. Shavees settled into the chairs two at a time to get shorn.

High school senior Connor Smith braved the shave “for the cause.” He planned to donate his long dark locks.

Teacher and boys’ basketball head coach Paul Hanson joked, “They tell me this will get rid of my gray!”

Wayne Butler of Central City Fire Department laughed, “I did it last year and haven’t cut my hair since. I wouldn’t have made it another two weeks!”

Tobie Bookstaver, a nine-year-old student from Wheat Ridge, and his dad, John, were getting the deed done together. The elder Bookstaver shared the good news that his mother, Tobie’s grandmother, is now cancer-free. Their Gilpin connection is wife and mom Courtney, who is a dispatcher at the Gilpin County Sheriff’s Office.

Two women joined the ranks of the shavees – Corey Averett and Stephanie Wagner. Averett’s mother and Wagner’s grandmother both passed away from cancer within the past couple of months. Wagner is with Central City Fire, and Averett is a private individual.

Each person getting shaved received a St. Baldrick’s medal and earned the applause of the student body, and the young people even rose in a standing ovation after the women parted with their locks.

St. Baldrick’s urges us all to get involved. “Kids are gold. You have the power to fund research that saves their lives.” There are more ways to help than just getting your head shaved. For more information, see www.stbaldricks.org/get-involved.

END_OF_DOCUMENT_TOKEN_TO_BE_REPLACED

Where the dead get to tell their story By Jaclyn Schrock On Saturday, August 21, the Gilpin Historical Society held their annual Cemetery Crawl. Tickets allowed the shuttle of hundreds of guests from the Teller House parking lot to the Cemetery. Depending on v... END_OF_DOCUMENT_TOKEN_TO_BE_REPLACED

Benefitting the county, schools, and much more By Don Ireland   This year marks the 30th anniversary of casinos opening in the former little mining towns of Black Hawk, Central City and Cripple Creek, Colorado. In those early years, smoking was allowed inside ... END_OF_DOCUMENT_TOKEN_TO_BE_REPLACED