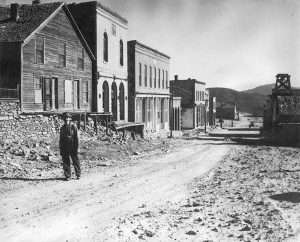 Per request from one of our subscribers, Mary Peery, for more Nevadaville stories, here’s a fascinating article about Leonard and “The Country’s Smallest Hamlet” in the DelMarva Star, Wilmington, Delaware, January 6, 1935:

“Leonard Nichols grins and walks on Main Street in Nevadaville, Gilpin County, Colorado. A residence tops a stone retaining wall behind him. The Masonic Lodge has a brick front with arched windows on both floors and an incised panel under the cornice. The Oddfellows Building has stone trim and storefronts with mill-worked pilasters. The Bon-Ton Saloon has three arches. The wood-frame tower of the City Hall/Fire Department has a bell; cars are parked in the background.”

Photo: 1931-1935 Penciled on back of photoprint: “The Masonic Lodge chartered by Kansas Territory is the white arcaded building on the left. City fire department on the right.”

This is such a great picture! So many of the buildings were still there when the photo was taken – the first building on the left was Newlin’s Boarding House, the closest thing to a hotel Nevadaville ever had.

The next building was the 2-story brick Redman Lodge Hall, which housed, among other things, John Nankervis’ Butcher Shop, and there were apartments upstairs.

Beyond the Redman’s building was the largish JR Rowling Block, which housed a clothing store and other retail on the first floor and the famous Masonic Hall on the second floor (if memory serves, they still meet).

Beyond Kramer’s, the two-story brick building housed a Billiards Hall, a shoe shop and a drug store (there was a vault in the rear of the building which may have served some of the functions of the bank Nevadaville never had).

You can barely make out more buildings beyond – the next, a two story brick, was the home, first, of the Colorado Trading Post Investment Company and then hosted a Saloon, Grocery and Clothing Dry Goods Store, with a meeting hall upstairs.

The last building in line, faintly discernable, was the IOOF Lodge building, and after a big gap in the photo there is one further building that I believe was a saloon. On the opposite side of the street the bell tower signifies Nevadaville City Hall and fire department.

Amazingly enough the Masonic Lodge is still standing and is still used for their meetings. Thanks to Eric Miller, who also uncovered this photo title “Man in front of store.”

END_OF_DOCUMENT_TOKEN_TO_BE_REPLACED

Benefitting the county, schools, and much more By Don Ireland   This year marks the 30th anniversary of casinos opening in the former little mining towns of Black Hawk, Central City and Cripple Creek, Colorado. In those early years, smoking was allowed inside ... END_OF_DOCUMENT_TOKEN_TO_BE_REPLACED