“Larry the Librarian” will leave big shoes to fill 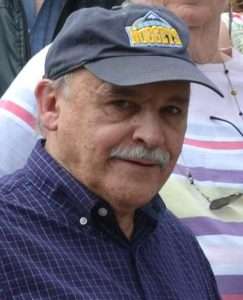 Larry Grieco, beloved library director of the Gilpin County Public Library for the past 16 years, has reached the retirement milestone. To celebrate, his many friends and fellow book-lovers threw him a party at the library on Saturday, July 16. A crowd of about 35 shared a potluck of finger food and “Larry stories” in the welcoming, art-filled surroundings of the library meeting room. Most of the members of the library’s Board of Trustees and the Friends of the Library (a non-profit fund-raising group) were there, along with several members of the public and colleagues from the county. There were plenty of good memories, laughter, and a few tears during the celebration.

Although anticipating retirement, Larry will continue at the library until his replacement is hired by the library board. They have been conducting a search for a new library director for the past several months. Still, as several opined, the fact that Larry hasn’t left yet is no reason not to have a party now!

Guests enjoyed two beautifully decorated cakes. Ann Wyss, a member of the library’s Board of Trustees, ordered one of them. Knowing Larry’s penchant for baseball, she ordered a cake with a baseball theme, only to discover that Costco had made a golf cake.

“Everyone’s asking if I’m going to play golf in retirement,” chuckled the soft-spoken director, “but I don’t play golf!” Well, Costco almost got it right — it is one of those sports with a stick and a ball.

The Board of Trustees and Friends of the Library had selected thoughtful gifts: a generous gift card to the Colorado Rockies, a music CD by renowned jazz guitarist Django Reinhardt, a Magnetic Poetry word tile kit, and a first edition autographed copy of a children’s book called “Larry the Librarian” by library trustee Virginia Unseld.

She took a few moments to read aloud her short and humorous book. “Larry loved books and people, so he became a librarian,” she began. It was a delightful story of Larry’s work and place in the Gilpin community.

When asked to speak himself, Larry got out only a few words before he was overcome. “Thanks for coming at the end of my career of 43 years …” He had to leave the room for a few moments.

Of course, no one thought any less of him for his emotion. Many were glad to share what he meant to them. Friends of the Library members laughed, “If it weren’t for Larry, we’d be sitting on a pile of money!” Then they acknowledged, “He made the library what it is.”

Karla Schorzman has been integral in the library’s poetry reading sessions since the early 2000’s. She related that Larry was her boss on her first job, and they’ve been friends since the early 1980’s.

Another poet, Burt Rashbaum, said both he and Larry moved here from Buffalo, though they didn’t know each other there. “It’s great to see him get to this point. The next library director will have big shoes to fill.”

Karen Anderson, who was on the original board of trustees that helped build the library, recalled the work done to construct it back in the 1990’s. She credited Elaine Schoelzel for establishing the library. “Elaine organized us all to work on it, but we never imagined having so superb a librarian as Larry. It’s an honor for the county to have him.”

George Blevins, Gilpin’s library technician and “Cabin Fever” cartoonist, teased, “We never knew what he was going to do next. He came up with some weird things!”

“Innovative!” someone corrected amid the laughter.

What’s next for Gilpin’s library director? “There is nothing on the horizon yet,” he noted. He plans to pursue writing, particularly poetry, or maybe longer works. For now, he will take the adventure that he is sent.

Undoubtedly, he’ll be doing some reading, as well. Of course, one who has worked with books as a profession must have his own favorites. Larry is partial to A Moveable Feast by Ernest Hemingway, a memoir about Hemingway’s years as a struggling young journalist and writer in Paris in the 1920’s.

“I also enjoy the Spenser Mysteries by Robert B. Parker. I have turned a lot of people to this series and enjoy rereading them myself.”

Larry’s career reads like a book that you want to read and reread. A year spent serving as a VISTA volunteer in 1970 on the Standing Rock Sioux Reservation in South Dakota spawned the profession in library work that has lasted for 43 years.

He graduated with a BA in English and a Master’s Degree in library science from the State University of New York at Buffalo. Among the diverse places he has worked are St. Croix in the Virgin Islands, East Morgan County Library in Brush, Colorado, the Library for the Blind in Daytona Beach, Florida, the Library for the Blind in Denver (now the Colorado Talking Book Library), and the Colorado Christian University library.

He has also written columns for the Weekly Register-Call and The Mountain-Ear every week for the past 16 years.

His numerous achievements include an EBSCO Award (an acronym for Elton B. Stephens Company) for Excellence in Small/Rural Public Libraries in 2010 for Gilpin library’s ongoing artist-in-residence program each summer. Other innovative services are the weekly children’s story hour and summer reading program, public notary, free Internet connectivity, a meeting room, special events throughout the year, smiles, and ideas. The library’s website contains “Footnotes,” a column written by Larry about trending books, links to genealogy resources, and financial literacy resources.

Larry says the people of Gilpin are the best part of his job, and he has a few parting remarks for those special library patrons:

“I would like to send a special greeting to everyone who lives in Gilpin County. I hope you all are having the most wonderful summer of your lives. I’d like to thank all those whose kids are participating in our Summer Reading Program, and thank the participants in the artists-in-residence workshops and everyone who treats the library as though it was the centerpiece of Gilpin County – the Republicans, Democrats, historic advisory committee, the knitters, the kids and parents who come each week to our Wednesday story hour, the Peak to Peak Chorale, all of our regulars, and even our “Baker Street irregulars.” And thank you for coming to the library for all these years. We’ve been proud to serve you up the best library we can. I hope you will keep coming and keep finding whatever you’re looking for in a library. Good luck to all!”