Lady Eagles win some, lose some 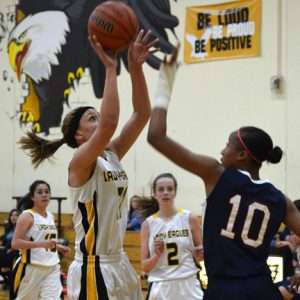 It was a mixed bag for the girls’ basketball team last week, with one win and one loss. The Lady Eagles’ record now stands at 12-3.

The Lady Eagles blasted the Cornerstone Christian Bulldogs 45-14 in a league battle January 29 on the Bulldogs’ home court.

Stephanie Siegrist played with the team again after being sidelined with an injury to her ankle in the Eagles’ match against Vanguard on January 19. The team has been hampered by other injuries this season, also. Andi Ramsey, who injured the anterior cruciate ligament in her knee during the game against Vanguard, intends to return to play soon. Ramsey does not plan to have surgery, but instead intends to wear a brace and play when the knee is stronger.

Samantha Peterson led the Eagles in scoring against Cornerstone with 14 points, followed by Khristine Barr with nine, Katura Sales with seven, and Ashlen Cortez with five. Most of the Eagles players managed to get points on the board.

Several of the team members sank free throws as well. Peterson had three free throws and Alyssa Chareunsouk had two. Barr, Sales, Cortez, Garcia, and Stephanie Siegrist each made one, for a total of ten.

The ladies got an amazing 22 defensive and ten offensive rebounds. Peterson had six steals, and Sales and Cortez each had three. Garcia and Barr snatched two steals apiece, and Lepro and Siegrist each grabbed one.

In the game with Cornerstone Christian, the junior varsity Lady Eagles got nudged 31-36.

The Lady Eagles were disappointed in their bout with Belleview Christian at home on February 1. The final score was 40-29, with Belleview leading all the way. Gilpin managed to battle within a two-point striking distance in the third quarter, but the Bruins rallied and widened the gap dramatically in the final period.

Gilpin did well on rebounds, grabbing a total of 28, plus ten steals, with Peterson nabbing five of those.

The junior varsity won their game against Belleview 22-19, forging ahead in the fourth quarter to win. Prior to that, Belleview had been ahead all the way.

END_OF_DOCUMENT_TOKEN_TO_BE_REPLACED

Where the dead get to tell their story By Jaclyn Schrock On Saturday, August 21, the Gilpin Historical Society held their annual Cemetery Crawl. Tickets allowed the shuttle of hundreds of guests from the Teller House parking lot to the Cemetery. Depending on v... END_OF_DOCUMENT_TOKEN_TO_BE_REPLACED

Where the dead get to tell their story By Jaclyn Schrock On Saturday, August 21, the Gilpin Historical Society held their annual Cemetery Crawl. Tickets allowed the shuttle of hundreds of guests from the Teller House parking lot to the Cemetery. Depending on v... END_OF_DOCUMENT_TOKEN_TO_BE_REPLACED