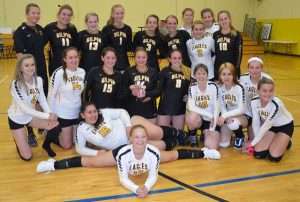 Gilpin County High School hosted its annual invitational volleyball tournament on Friday, September 4. It was the Lady Eagles varsity’s first time in years to win the tourney championship, and they now boast a 3-0 record to get their season off to a proud start.

In a long day that stretched from 10:00 a.m. to 8:30 p.m., the varsity team won its first two games against Lake County and Denver Waldorf, then played Soroco (Routt County School District) in the championship round, winning 2-1 in three nail-biting sets.

The junior varsity team also shone, winning its first two matches, also against Lake County and Denver Waldorf, but losing to Soroco 2-0 in the JV championship battle. The girls fought hard in a neck-and-neck contest, going down 25-20 in the final set.

Varsity coach Alexis Donaldson commented, “We’ve gotten off to a great start. The kids work well as a team. They just want to go out and play.”

Nederland and Shining Mountain Waldorf also participated in the tournament.

Gilpin will meet Deer Trail at home on Thursday, September 10, starting with middle school and JV at 4:30 p.m. and varsity at 5:30 p.m.

Gilpin defeated Soroco 2-1 for the championship title. Although Gilpin had a big lead in the first set, Soroco battled back to surpass the Eagles and won that one 25-22. That got the Eagles’ adrenalin going for the second set, in which they led all the way to a 25-16 win, though Soroco did come within 3 points a time or two.

With the teams winning one set each, the suspense was prolonged throughout a third set, which Gilpin won 15-13 to a chorus of screaming fans. Soroco scored the first 2 points, but Gilpin answered quickly, tying the score at 3-3 within moments. The game was fought by inches as the teams tied point for point all the way to the end. Gilpin finally squeaked by 15-13.

Alex Martin took top place in kills with 6, followed by Jada Gohdes with 4. Lindsey James and Sierra DeLeon chipped in with 1 each.

James had 3 serving aces while DeLeon got 1.

James was also the leader in solo blocks with 4, with Gohdes contributing 1. James and Cicely Lepro each had 1 block assist.

DeLeon was first in digs with 6. Martin and Aspen Nadeau followed with 5 each, Lepro with 4, Alexis Kennedy with 3, and Gohdes and Breanna Kennedy with 1 each.

DeLeon had 8 ball handling assists, and A. Kennedy had 2.

Serving received success was led by a quartet of Nadeau, Lepro, Martin, and A. Kennedy, each with 4.

Gilpin triumphed 2-0 as they played Lake County. Set scores were 25-2 and 25-13. Leader in kills was Martin with 10; James and A. Kennedy followed with 4 and 3, respectively.

Martin was tops in digs with 10.

Serving received success was led by Martin with 7.

END_OF_DOCUMENT_TOKEN_TO_BE_REPLACED

Benefitting the county, schools, and much more By Don Ireland   This year marks the 30th anniversary of casinos opening in the former little mining towns of Black Hawk, Central City and Cripple Creek, Colorado. In those early years, smoking was allowed inside ... END_OF_DOCUMENT_TOKEN_TO_BE_REPLACED