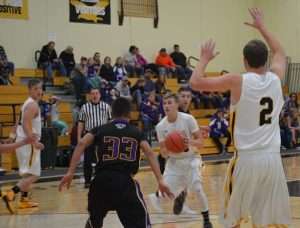 Basketball teams back in action after winter break

In a tightly-played match, the Gilpin H.S. girls’ varsity squad scored another victory to add to their overall season record of 4-2, when they met the Longmont Christian Warriors away on January 5. The Lady Eagles achieved a 40-35 victory over their rivals, who possess a 5-2 record. It was the first league game for the season for the two teams.

The Eagles girls’ and guys’ teams are playing Lyons in the Gilpin gym as this issue of the Weekly Register-Call goes to press.

Gilpin led by a slim 11-8 margin in the first quarter of the Longmont game. They stayed ahead of the struggling Warriors 20-12 at halftime. Longmont got their game on in the third quarter with 13 points to the Eagles’ 9, drawing within 4. The main excitement was saved for the final period, with Gilpin managing to maintain an 11-10 lead in that quarter.

Several of the Gilpin ladies had an outstanding game. Senior Cicely Lepro was the point leader with 13, including 5 two-point field goals and 3 free throws. Sophomore Alicia Johnson showed promise with 8 points, including the team’s only 3-pointer. Teammates Jessica Wilhelm and Nicole Adams also came in with 8 points each. These sophs will bear watching in the seasons to come.

Wilhelm was also the top rebounder with 8 defensive and 1 offensive, and Lepro followed with 4 offensive and 3 defensive grabs in the team’s total of 34. Wilhelm and Lepro also led in steals with 5 and 4, respectively. Although the Lady Eagles were unable to put up any blocks — while Longmont mustered 9 — Lepro had 11 deflections, Wilhelm had 10, and Samantha Smith contributed 5.

Whitney Echols was the top point-getter for Longmont with 28.

The Gilpin varsity boys were not as fortunate as their counterparts against their tough Warrior opponents, losing 66-42 on January 5. This puts the Eagles at an overall record of 1-5. Longmont has a 6-1 tally so far.

The teams appeared well matched throughout the first quarter, the Warriors finishing with just a 6-5 lead over the Eagles. The second quarter did not go well for Gilpin, as the boys were only able to put up 9 points while Longmont surged ahead with 20. The score at the half was 26-14 Longmont.

The teams both scored 17 points during the third quarter. By this point the Warriors were ahead by 12. Catching up proved out of the question for Gilpin, and the Warriors put 23 more points on the board while the Eagles accumulated 11.

Gilpin’s seniors Tanner Davis, Chris Burtschi, and John Immordino put up the most visible results for their squad. Davis led with 19 points, including 3 three-point field goals and 5 two-pointers. He also led his team’s rebounding effort with 5 offensive and 6 defensive, 2 assists, and 3 steals. Burtschi followed, shooting 8 points in 4 two-pointers and helping with 2 assists, 2 steals, and 2 deflections. Immordino garnered 7 points. Will Lorenz contributed 4 points, while Alex Wilhelm and Nolan Lindberg each got 2.

END_OF_DOCUMENT_TOKEN_TO_BE_REPLACED

Benefitting the county, schools, and much more By Don Ireland   This year marks the 30th anniversary of casinos opening in the former little mining towns of Black Hawk, Central City and Cripple Creek, Colorado. In those early years, smoking was allowed inside ... END_OF_DOCUMENT_TOKEN_TO_BE_REPLACED

Where the dead get to tell their story By Jaclyn Schrock On Saturday, August 21, the Gilpin Historical Society held their annual Cemetery Crawl. Tickets allowed the shuttle of hundreds of guests from the Teller House parking lot to the Cemetery. Depending on v... END_OF_DOCUMENT_TOKEN_TO_BE_REPLACED