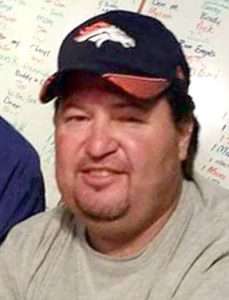 Kelly Chris Kerr, age 48, of Black Hawk, Colorado died unexpectedly of a fatal heart attack at the family home on July 13, 2016. He was born June 17, 1968, in Ogallala, Nebraska but lived his early years in Grant, Nebraska. In the early 1970s, his family moved to Arvada, Colorado where he attended the Lawrence Cottages through middle school. His family moved to the Black Hawk area in the late 1970s, and he graduated from Gilpin High School in 1986.

After high school, he attended Eastern Oregon State College and Ames College in Greeley, where he majored in communication and earned his Associate Degree. Kelly’s career was in plumbing installation and carpentry. He was always helpful to his family and friends and had a friendly and outgoing personality.

He is survived by his mother, Jo Ann, brother, Ron, both of Black Hawk; his grandfather Lolen (Whitey) Shirley, two aunts, C. J. Rezac and Mary L. Olson, all from Nebraska; three cousins, Mike Olson, Jim Rezac, both of Nebraska and John Rezac of Florida. He was preceded in death by his father Tom Kerr.

Memorial graveside service will be held on Saturday, July 30 at 1:30 p.m., at the Black Hawk Dory Hill Cemetery in Gilpin County. Following the service, at 3:00 p.m. a celebration and remembrance of Kelly’s life will be held at the upstairs event room at Charlie’s Place, Central City.

Kelly will be sorely missed by his family and friends.

On behalf of the City of Black Hawk, I would like to express our deepest condolences to JoAnn and Ron Kerr on the passing of Kelly. May you both find comfort in knowing that we care. You remain in our thoughts and prayers. Mayor David D. Spellman