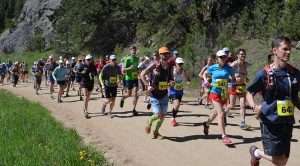 Trail racers in the seventh annual Dirty 30 enjoyed the best of Golden Gate State Park on Saturday, May 30, just in time for some beautiful weather – finally. The first really sunny day in May smiled on more than 400 fifty-kilometer and 200 twelve-mile runners. Proceeds will be given to the Gilpin County High School athletics program.

Runners came from all over the U.S. and from as far away as Italy. Race organizer Megan Finnesy reported, “I wanted to make the race fun for everyone, while at the same time making it competitive for the elite runners.”

It was the race’s biggest event ever, with the 600-plus runners outstripping last year’s 480. Prize amounts went up this year, too: $1,000 each for men’s and women’s 50K winners and $500 for second place, with lesser prizes for third through fifth place. 12M winners were awarded $300 for first place, with second and third places winning $200 and $100.

About 100 students and adult volunteers from the school directed traffic, cooked and served the noon meal, and handed out water and snacks at six aid stations along the course. Athletic director Jeff Schuessler and several students from the various teams worked the day before the race to mark 19 miles of trails. Every varsity team had student athletes volunteering. Race proceeds, when calculated, will be divided evenly among the eight teams and will be used for camp costs, team wear, and meals.

Rocky Mountain Ham Radio/America Radio Emergency Service provided internet connections for the first time this year. Richard Williams, mission coordinator, said the group’s main goals were to track the runners’ times and locations digitally, providing that information to the race time-keeper, and to dispatch aid if a runner got injured.

Gilpin Ambulance Authority stood by to help anyone injured or overcome by altitude issues.

Although there were no runners from Gilpin High School this year, 2014 Gilpin graduate Grace Diekman competed in the 12M race, winning third place in her age group with a time of slightly less than three hours.

Where did the name Dirty 30 come from? Finnesy played basketball as a student at Boulder High School, and in those days, the only way she would run was with a basketball in her hands. The first 30 minutes of practice was called the Dirty 30 – 30 minutes of intense work on fundamentals. They had to give 110 percent effort.

The runners parked at the Gilpin County Fairgrounds and were transported by shuttle buses to the start at the Red Barn picnic area about three miles northeast of the park’s visitor center.

Runners for the 12M race heeded a 9:45 call to line up at the start. Finnesy gave final instructions and cautioned about the really technical parts.

“I want everyone uninjured, but if you do get hurt, make it good, because there is a $100 prize for the one who gets the bloodiest!”

The 12M racers were sent off in two waves, jogging easily. They soon found that the starting yards were about the only flat section of the course. It wasn’t long before they embarked on lung-burning climbs and screaming descents. The trail elevations ranged from about 7,600 to 9,500 feet, with spectacular views of snow-capped mountains.

As the racers pushed on over the winding paths, signs and spectators encouraged them, “Great job!” “Almost there!” That inspired most of them to keep going, but a few did find the race too much to finish.

The lead racers made it through in under five hours for the 50K and under two hours for the 12M. As they chugged into the finish line, they received applause from waiting Gilpin students and a hug from Finnesy.

Finishing racers were treated like royalty. Expo sponsors gave away Dirty 30 souvenir glasses, Boulder Beer, coconut water, smoothie samples, and more. Performance wear and running shoes were available to examine, along with coupons for merchandise. Those attending all booths received a bandana with the course map printed on it. Massages were available for the weary and sore, while the Zimmermans Band entertained with Bob Dylan tunes. The barbeque included hamburgers, brats, veggie burgers on sprouted buns with all the fixings, watermelon, and fiesta lime rice chips.

Finnesy gave a big shout out to Roy’s Last Shot, a well-known Gilpin sponsor that donated gallons of pasta salad for the lunch in exchange for a Harley shot glass (as many know, owner Roy Stewart is vying for a world record number of shot glasses and is well on his way).

Some, of course, were new to the race. Laura Walls related, “This is my first real trail race. I look forward to enjoying the view from Windy Peak, going to the post-race celebration, and soaking my feet in the creek afterward.”

Announcement of the winners concluded the day’s event.

The following winners for age category are listed in first to third place, male or female:

For a full list of runners and times, see www.dirty30.org.

END_OF_DOCUMENT_TOKEN_TO_BE_REPLACED

Benefitting the county, schools, and much more By Don Ireland   This year marks the 30th anniversary of casinos opening in the former little mining towns of Black Hawk, Central City and Cripple Creek, Colorado. In those early years, smoking was allowed inside ... END_OF_DOCUMENT_TOKEN_TO_BE_REPLACED