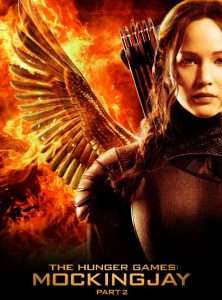 The final chapter has hit the movie theaters in the unexpected hit, The Hunger Games, adapted from the Young Adult novels by Suzanne Collins. The movie series began in 2012 with Jennifer Lawrence (X-Men: First Class, Silver Linings Playbook, American Hustle), playing Katniss Everdeen, desperately shouting, “I volunteer as tribute!” taking the place of her sister, Prim, played by Willow Shields (Beyond the Blackboard, A Fall from Grace, Dancing with the Stars) having been chosen to participate in a last-one-standing tournament with other children from around the country. While I’m not sure who chose to split the final book, Mockingjay, into two movies, I believe creatively it was the right thing to do, although, if you have not seen the first part, Part 2 will be confusing. This movie was not made to stand alone, but to truly be the second half of a story. As I review the movie, I will come from the perspective of someone who has read and enjoyed (mostly) the books.

This movie picks up just a day or two from where Part 1 left off with Katniss still recuperating from a vicious attack from her one-time friend, love interest, and recently rescued ally, Peeta Mellark, played by Josh Hutcherson (RV, Bridge to Terabithia, Journey to the Center of the Earth). Seeing Peeta thrashing in his bed due to the torture received at the Capital, has given Katniss tunnel vision and she can only think of one thing; kill President Snow, played by Donald Sutherland (Buffy the Vampire Slayer, Six Degrees of Separation, Pride and Prejudice), and all of this pain can end. The President of District 13, Alma Coin, played by Julianne Moore (The Lost World: Jurassic Park, The Big Lebowski, Crazy Stupid Love), keeps her eyes on the bigger picture; defeat the Capital and the districts supporting it, and the country can once again have peace through freedom. Katniss, as the Mockingjay, is the symbol people are relating to and rising up for in rebellion. As the Capital severely punishes each district that has dared to show rebellion, refugees from those districts end up in living underground with District 13. Several battles have already taken place led by, and independently of, District 13 and President Coin is careful not to allow Katniss to come close to any real danger. Once the final assault on the Capital begins, Coin puts Katniss on the star squad at the rear so she can be seen by the troops on camera, but never get hurt. The Capital is defended not so much by soldiers as by weapons crafted by the game masters that would have been used in future Hunger Games. Former victor, Finnick Odair’s, played by Sam Claflin (Pirates of the Caribbean: On Stranger Tides, Snow White and the Huntsman, The Quiet Ones) comment, “Welcome to the 76th annual Hunger Games,” is the signal for the viewer and the star squad that there is no safety for anyone involved and people will die. And so they do. As the star squad makes their way through the city, they are confronted with different contraptions and circumstances that slowly pick them off, very much like the Hunger Games of the prior movies. Since modern dystopian tales must end happily, so does the Hunger Games and the Capital is defeated with a handful of your favorite characters living to see the end.

The sets are grand, the scenery is beautiful, and the special effects are (usually) amazing. The movie was filmed in Georgia, Massachusetts, Germany, and France, bringing a real world feeling to the scenes. The movie is carefully balanced between war-time action and quiet introspection. For fans of the book, the movie also follows the book fairly close giving readers gratification of seeing their story played out on the screen.

The acting is superb. With people like Woody Harrelson (Cheers, No Country for Old Men, Zombieland), Stanley Tucci (The Devil Wears Prada, E.R., Julie and Julia), the late Philip Seymour Hoffman (The Big Lebowski, Capote, Charlie Wilson’s War), and Jennifer Lawrence, how could the acting go wrong? The first three have proven their acting chops in many appearances and Jennifer Lawrence could act out the dictionary and still get an Oscar. Lawrence puts so much feeling into the character of Katniss, you laugh when she laughs, cry when she cries, and get angry when she gets angry. If nothing else, the ticket price is worth watching Lawrence alone.

The costume design is extraordinary, bringing to life some of the characters hardest to pull off, such as Tigris in the Capital. Kudos go to Ve Neill (Amistad, Galaxy Quest, Pirates of the Caribbean: Dead Man’s Chest), the makeup department head and designer.

Mockingjay Part 2 follows the book. Collins wrote Mockingjay, as she did the other two, from the first perspective of Katniss and Katniss alone. The movies Catching Fire and Mockingjay Part 1 took a little liberty and showed scenes from other perspectives, not just Katniss. One of my greatest complaints about the book, Mockingjay, is that because it stays true to Katniss first-person perspective, much of the story is never written. At one point during a battle, Katniss is knocked unconscious and when she comes to, the war is over – what? How did the rebels finally take the Capital? There are key deaths that happen outside of Katniss’ perspective that again are never written. The book left me feeling betrayed as a reader as if Collins did not think the story important enough to write. What was she thinking? Well, Mockingjay Part 2 brings us back to mainly Katniss’ perspective and again I felt cheated that several key scenes were never filmed just because she did not personally witness them. I will give props to the screenwriters, though, for embellishing a scene just before Katniss gets knocked out allowing her to witness a crucial event. And again, for extending an emotional scene in the movie that only received a single and short sentence in the book, allowing one character to show his heroism.

The pacing of this film felt a little herky-jerky when flipping from action to introspection. While Part 1 did a decent job of segueing from one scene to the other, this one was a little choppy.

The music. I love James Newton Howard who has composed some great scores for movies like The Fugitive, The Sixth Sense, The Dark Knight, and The Bourne Legacy. Howard has scored the prior Hunger Games movies and perhaps he was just tired, but the score for Part 2 sounded lazy. The tune from Part 1, The Hanging Tree, is a golden opportunity for a composer to weave within the score because that poetic song plays perfectly with the plot of the movie. This should have been Katniss’ theme song, but it is never heard. There was nothing new in this movie to hold on to and hear playing in your head. This is one score I will not be looking to own.

There is one more thing, mostly irrelevant to all but a handful, which I just cannot let go. At the end of the credits in every Hunger Games movie prior to this one, there is an evolution of the Mockingjay symbol. At the end of Part 1, the Mockingjay not only catches fire, but flaps its wings to break the outer circle of its prison (the pin). I fully expected to see the same imagery at the end of Part 2, and then the bird would fly away – free. Nope. The credits ended and there was nothing.

Mockingjay Part 2 delivers the end of a three-book story up to expectations, but does little to exceed them. Fans of the books will love the ending, giving true honor to the written word, but for others, it will remind of The Return of the King and “Jackson’s multiple endings.” Peter Jackson was following Tolkien’s book, and director Francis Lawrence followed Suzanne Collins book. The film is rated PG-13 for intense sequences of violence and action. The books were written for the Young Adult category and the movie does the same. I would think twice about taking a pre-teen to see this one. The acting, the sets, the costumes, and the special effects were excellent. A couple of CGI’d scenes were too chaotic to truly understand what is going on, but they are brief. Due to an apparent lazy quality to the film making, this movie gets downgraded for me to three and half out of five primroses. My wonderful wife was very entertained and can overlook insignificant flaws and gave it a four and a half out of five lethal pods. My eighteen year old daughter (solidly in the target demographic) rates it four out of five night-lock capsules.

END_OF_DOCUMENT_TOKEN_TO_BE_REPLACED

Benefitting the county, schools, and much more By Don Ireland   This year marks the 30th anniversary of casinos opening in the former little mining towns of Black Hawk, Central City and Cripple Creek, Colorado. In those early years, smoking was allowed inside ... END_OF_DOCUMENT_TOKEN_TO_BE_REPLACED