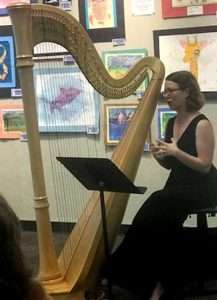 Presents “A Weekend in New York”

In these tumultuous political times and sweltering weather, it was a pleasure to gather Wednesday evening at the Gilpin Library, where harpist Kathryn Harms treated the assembled group to “A Weekend in New York.” First stop was afternoon tea at the Waldorf-Astoria Hotel. The soothing sound of the harp is perfect classy background music (high tea costs $68, but our refreshments were free). In a medley of romantic and big-band tunes, Kathryn voiced the easily identifiable melodies with precision, while rich dense arpeggiated harmonies of jazz-inspired added-seventh chords reverberated from her echoing ringing strings.

In Time After Time (Jule Styne) there was a toe-tapping rhythmic pulse, but always the satisfying rubato (a musical push-and-pull of tempo within phrases and leading to cadences). Near the end of Tea for Two (Vincent Youmans) we heard a jazzy walking bass line, creating (on pedal harp!) the ambience of a jazz trio rhythm section.

Evolved from a plucked hunters bow, the harp is probably the oldest instrument. All cultures have harps in one form or another; it is mentioned many times in the Bible

Fascinating to watch were Kathryn’s fingers flying as she plucked the strings. Only the thumb, index, middle and ring fingers are used; the pinky curls out of the way gracefully. At the same time, the feet are manipulating seven pedals that change the pitch of the strings, and make possible the extended harmonies, key changes and accidentals. Physical strength and coordination are required of the harpist.

When she stopped to check strings out of tune, Kathryn fielded questions from the eagerly engaged audience and shared stories of her musical life and experience. She spoke of the diabetic monitor she wears on her arm to test blood sugar levels in lieu of pricking fingers. Calluses are necessary, blisters are occasional hazards, but imagine a harpist with pricked fingers!

She spoke about the harp itself, which weighs 81 pounds and travels on a mattress in her car with back seats removed. Made in Chicago with specially chosen wood, the harp has 47 strings.

Our second stop in our New York weekend tour was to a Broadway show, reimagined by Kathryn with a selection of well-known Broadway tunes: Memory and Music of the Night (Phantom of the Opera), On My Own (Les Miserables), and Send in the Clowns (A Little Night Music). To this last tune, Kathryn’s dramatic musicianship brought the required depth of intensity to Sondheim’s brilliant composition of heartbreak splashed with irony.

Kathryn then took us to three separate stops at Lincoln Center. At the New York City Ballet we heard the harp cadenza from Tchaikovsky’s Waltz of the Flowers (Nutcracker). She explained that Tchaikovsky and older composers were unfamiliar with the workings of the harp, and so wrote in a ‘clunky’ style. Harpists later reinvented these works to get the flow that we now hear and expect. While she added in the oboe cues, we had no orchestral tonic chord resolution, so this cadenza left us hanging in harmonic limbo.

We moved on to the Metropolitan Opera where we dipped into Donizetti’s Lucia di Lammermoor, the scene where Lucia waits for Edgardo. In her famous aria “Regnava nel silenzio,” the harp plays a haunting cadenza, foreshadowing Lucia’s madness and tragic end.

Finally, we arrived at the New York Philharmonic. She presented the dance-like third movement to Handel’s Harp Concerto in B-flat major.

Kathryn is a consummate artist, having played and studied the harp for 20 years. She performs continuously in New Mexico and Colorado, and teaches harp at CU. She has named her harp Satine, after Satine the enchantress of the Moulin Rouge, who has the ability to enrapture her audience and capture the hearts of her listeners. This is exactly what Kathryn and Satine did on this evening.

Next up on July 31 at 7 p.m. is a Jazz Ensemble. Thanks to Michael Carlson and the Friends of the Gilpin County Public Library for this wonderful 2019 summer concert series.

END_OF_DOCUMENT_TOKEN_TO_BE_REPLACED

Benefitting the county, schools, and much more By Don Ireland   This year marks the 30th anniversary of casinos opening in the former little mining towns of Black Hawk, Central City and Cripple Creek, Colorado. In those early years, smoking was allowed inside ... END_OF_DOCUMENT_TOKEN_TO_BE_REPLACED

Where the dead get to tell their story By Jaclyn Schrock On Saturday, August 21, the Gilpin Historical Society held their annual Cemetery Crawl. Tickets allowed the shuttle of hundreds of guests from the Teller House parking lot to the Cemetery. Depending on v... END_OF_DOCUMENT_TOKEN_TO_BE_REPLACED