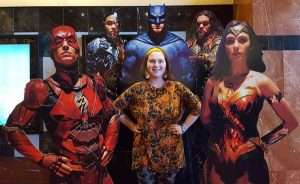 It was the best of movies, it was the worst of movies, it was the age of directorial wisdom, it was the age of directorial foolishness, it was the epoch of CGI, it was the CGI of incredulity, it was the season of light heartedness, it was the season of darkness, it was the spring of hope for the future of DC Comics, it was the winter of despair for the future of superhero movies, we had everything to hope for, we had nothing to hope for, we were all going direct to blockbuster status, we were all going to bunkruptcy.DC Comics has been plagued by criticism of its movie universe surrounding the exploits of Batman, Superman, and Wonder Woman. They have struggled to rise above the monstrous shadow of success achieved by Marvel; they were five years behind Marvel beginning their movie dynasty, their movies lacked heart, and they had difficulty representing their comic book heroes with any degree of accuracy. And then, in June 2017 as the Marvel franchise is starting to feel old and bloated, “Wonder Woman” shredded the poor DC image finally nailing a character with enough humanity to feed a craving from DC fans. That movie was not perfect, but it brought back hope to the franchise. With great anticipation, fans have been awaiting “Justice League” which brings together a team of mostly likable superheroes to battle a common foe. Did it rise above its predecessors or did DC once again fall into a pit of despair and loathing?

Picking up shortly after the travesty that was “Batman v Superman: Dawn of Justice,” space bugs start plaguing the world in isolated incidents. In response, Bruce Wayne – Batman, played by Ben Affleck (“Argo,” “Gone Girl”), begins recruiting people with special abilities to combat the growing crime rates attributed to Superman’s mortal absence. Barry Allen – the Flash, played by Ezra Miller (“Trainwreck,” “The Perks of Being a Wallflower”), eagerly joins along with Diana Prince – Wonder Woman, played by Gal Gadot (“Keeping Up with the Joneses,” “Furious 7”). Arthur Curry – Aquaman, played by Jason Momoa (“Stargate: Atlantis,” “Game of Thrones”), and Victor Stone – Cyborg, played by Ray Fisher (“The Astronaut Wives Club,” “The Good, the Bad, and the Confused”), need a lot more persuasion. The appearance of Steppenwolf, voice by Ciaran Hinds (“Frozen,” “Munich”), a space creature literally hell-bent on finding and uniting three mother-boxes, unites the four superheroes who are soundly defeated. Their only hope is to use one of the mother-boxes to resurrect the man-of-steel himself. Clark Kent – Superman, played by Henry Cavill (“Sand Castle,” “Immortals”), is not quite what they expected when brought back from the dead and now they have to figure out a way to defeat Steppenwolf on their own while their savior-icon deals with his own demons.

Two words: Joss Whedon. The credited director, Zach Snyder, had to step away from the movie in May 2017 to focus on his family after a tragic loss. Joss Whedon stepped in to take the reins and brought with him many years of experience from successful the Marvel films. The elements he contributed lifted the film out of drudgery and into a more light-hearted, hope-filled adventure.

Another two words: Zack Snyder. I am truly sorry for the loss in his family and wish him well. I am also sorry that he had any control of DC films at all. I feel that in attempting to be obviously different from Marvel, he tried to develop a universe somewhere between Tim Burton’s and Christopher Nolan’s Batman franchises. What it turned out to be is a depressing mess without the critical human connection for the audience. “Justice League” has plenty of those scenes.

The CGI. Due to the production problems and the push to release this film in 2017, there was quite a bit of editing and hastily created post-wrap work. Some of the CGI was spot on, but then there were some very cartoonish effects that cheapened the scene.

The story. I feel Steppenwolf was a poor choice as the first big-time villain to face a superhero ensemble. The creature is 100 percent CGI and there was very little for the audience to connect with. I think the story would have been better served with a human villain that outwits and/or ensnares each hero individually giving them the impetus to team up to defeat him or her. The resurrection of Superman felt wrong in many ways, so I would instead give that job to the likes of Lex Luthor who would raise Superman thinking he can control him. This would make a little more sense than the heroes making a questionably ethical choice.

The language. None of these characters used cursing; or at least, they didn’t when I was reading the comics or watching the movies and shows growing up. This is not Deadpool and so when Aquaman throws out some colorful metaphors, as an adult, it is funny, but it is unexpected.

I can’t say I enjoyed this movie as a whole. What I can say is I very much enjoyed parts of it, hated other parts, and was puzzled by the rest. It was painfully obvious when Whedon had full control vs. Snyder. The character interactions were wonderfully done especially near the finale. If DC takes a few cues from Whedon, then my hope is high for the DC franchise. The film is rated PG-13 for sequences of sci-fi violence and action. However, there are some choice words thrown about, too. The spiritual symbolism of resurrection and hell-bent world destruction are never truly addressed and could lead to some good and interesting discussions with your children. Overall, the film is entertaining, but not one I will eagerly see a second time. As I contemplate a rating, a single score would not do it justice; and so I must give it two ratings to represent the distinctiveness of the two directors. I rate the film two out of five bad CGI moments, but also four out of five fist bumps. My lovely and talented adult daughter did the same and gave it a two out of five slo-mo camera shots; and then a four out of five booyahs. My beautiful wife jumped on the same two-rating bandwagon and gave it two out of five forks, and four out of five bug sprays.

END_OF_DOCUMENT_TOKEN_TO_BE_REPLACED

Benefitting the county, schools, and much more By Don Ireland   This year marks the 30th anniversary of casinos opening in the former little mining towns of Black Hawk, Central City and Cripple Creek, Colorado. In those early years, smoking was allowed inside ... END_OF_DOCUMENT_TOKEN_TO_BE_REPLACED

Benefitting the county, schools, and much more By Don Ireland   This year marks the 30th anniversary of casinos opening in the former little mining towns of Black Hawk, Central City and Cripple Creek, Colorado. In those early years, smoking was allowed inside ... END_OF_DOCUMENT_TOKEN_TO_BE_REPLACED