“Just Between Us” turns up the heat 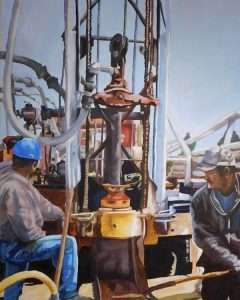 Gilpin County Arts Association (GCAA) is making valuable use of the newly heated Washington Hall Gallery in Central City with the extraordinary exhibit, “Just Between Us” featuring sculptor/painter Walter Barton and oil painter W. Max (Bill) Thomason. The 158-year-old building had no consistent heat source until the GCAA, in conjunction with the City of Central and several benefactors, had a forced air system installed in 2018. Before this, the rooms stood silently devoid of accoutrement, occasionally disturbed by the steaming exhalations of the maintenance man’s lungs. The challenge for the GCAA board, headed by president Eric Miller, was to fill those empty spaces between the fall fund raiser and the summer juried show. While the holidays lend themselves naturally to art works suitable for gifts, the remaining time necessitates more creativity, which was resolved with an exhibit of eloquent, thought provoking works by two local artists. To prepare, the board and other volunteers worked furiously and purposely to clean, paint, and reorganize the space producing comfortably warm and open viewing areas.

Walter Barton’s exhibit features the poignant messages of the human condition in life-sized sculptures balanced with subtly themed standing-mirror-sized tarot cards to the backdrop of mining timbers and stone walls. Walter is an elementary art teacher of 26 years in Douglas County giving children the opportunity to learn how to apply their imagination and creativity. One of his works, “The Scholar” he describes as the tension between solving problems with logic and with intuitive leaps or visions. Barton believes we are at a critical time in history where logic alone will not solve our problems and it will take those intuitive visionary leaps for viable resolutions. Walter’s favorite piece (although he emphasizes it is his favorite at the moment and all his pieces have a special place in his heart), “The Grindstone” features a man carefully balancing upside down, only instead of a head, his neck leads to a grindstone. For Barton, this is a reminder of the folks who have been left behind by the tech and finance industries, the blue-collar workers who work with their hands trying to balance their lives as it gets harder to live and work with middle to low class pay.

Grand oil paintings awash in emotion are grouped thematically on the remaining walls of the historic gallery demanding that you examine their deep messages before moving on. These are Bill Thomason’s masterful works. Bill has been an artist all his life, but most of that life has been taken up working in a company he partially owned. In 2012, Thomason sold his share of the company, so he could be an artist full-time. After accepting an invitation as an awards judge in 2018’s GCAA juried show, he was inspired to show his work in the unique gallery of Washington Hall. Bill tends to paint in series of works and his art is grouped according to each series: blue, ballerina, geisha, and blurred, for example. Thomason maintains that he is not a political painter, but he does enjoy seeing people react. He painted a tongue-in-cheek cold-war series just to observe people’s emotional response. Thomason tends to be emotionally melancholy which comes out in his art.

“Just Between Us” is much more than a place holder between the seasons; it is an impeccable and relevant exhibit that needs to be seen. People who attended the opening reception; from Mayor Jeremy Fey to reporters from other media publications were excited about the show. Fey said, “This is incredible!” Gallery Manager Roussel commented, “I can’t believe how well this came together! I could not have done it without the board (GCAA).” The closing reception will be May 3, 2019 from 5 – 8 p.m., but don’t wait for it to close since all pieces are for sale and the aesthetics are likely to change from week to week; in fact, at least one piece was marked “sold” on opening night. The GCAA board and gallery manager extraordinaire, Michele Roussel, have put in countless hours preparing Washington Hall and expertly hanging the show for maximum effect. It would be a shame if you missed it.

END_OF_DOCUMENT_TOKEN_TO_BE_REPLACED

Where the dead get to tell their story By Jaclyn Schrock On Saturday, August 21, the Gilpin Historical Society held their annual Cemetery Crawl. Tickets allowed the shuttle of hundreds of guests from the Teller House parking lot to the Cemetery. Depending on v... END_OF_DOCUMENT_TOKEN_TO_BE_REPLACED

Benefitting the county, schools, and much more By Don Ireland   This year marks the 30th anniversary of casinos opening in the former little mining towns of Black Hawk, Central City and Cripple Creek, Colorado. In those early years, smoking was allowed inside ... END_OF_DOCUMENT_TOKEN_TO_BE_REPLACED