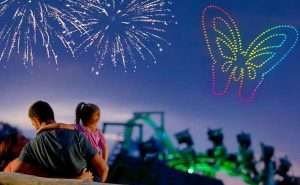 Drone light shows have begun to replace traditional fireworks displays across the world. However, neither type of sky shows is slated for Gilpin County this Independence Day. Originally, the City of Black Hawk investigated the concept of using a July 4th drone-light show this year. After holding initial discussions with a company that offered such a show, Black Hawk City Manager Stephen Cole said the two parties were unable to work out details.

The result: plans for any type of fireworks – drone or traditional ones – won’t occur this year. Black Hawk Mayor Dave Spellman suggested the era of fireworks may be over in the city, at least for the near-term future.

There are several reasons behind the reasoning:

During 2021 budget discussions this past November, Black Hawk didn’t include funds for any traditional fireworks display due to the high cost of the event. An alternative – and less expensive idea, suggested the possibility of using a company to create a drone fireworks display, at a cost of approximately $50,000, according to the Weekly Register-Call (Nov. 19, 2020).

Mayor Spellman noted last week that one of the previous hilltop launch sites for fireworks is no longer available due to construction work.  “We lost one of our sites for launching. We used to have another launch site, but there was an issue with debris falling on homes on Casey Hill. Fireworks are not likely to be resurrected at this point.”

Traditional fireworks typically include a tube-shaped cardboard shell containing powder (gunpowder) and a fuse, which is lit and launched into the air by a certified pyro technician. Sparkler-like substances, called “stars,” and various chemicals are placed in spheres and added into the shells, resulting in various colors and effects in the sky.

Rising costs and safety concerns with gunpowder-launched fireworks has opened a window of opportunity for the drone industry. Unlike fireworks, drones can be reused for many shows and they do not produce air or noise pollution. Drone companies typically offer communities a drone-fireworks light show that includes between 400 and 1,000 small drones, each equipped with color-changing LED lights. A computerized program launches the fleet, instructs drones to form various shapes, and changes the colors of individual drones to create entertaining displays. Some upscale displays use loudspeakers on the ground to play music that synchronizes with the changing lights and sounds. A drone light show is much cheaper than traditional fireworks; often in the range of $50,000, depending on the show.

However, drone displays cannot take place during rain or strong winds – factors that also cause traditional fireworks shows to be cancelled or postponed.

Intel, the corporate computer-chip giant, created the “Shooting Star,” a style of drone used in light shows, nearly a decade ago. They were used during the 2018 Winter Olympics; a Super Bowl halftime show in 2017, and a 2018 July 4th celebration.

President Joe Biden and Vice President Kamala Harris, following their election victory last November, were treated to a display combining both traditional fireworks and drone fireworks. (The video is still available on YouTube.) The Guinness World Record for such a display included 3,051 unmanned aerial vehicles, in China (also on YouTube).

Drone-light shows continue to grow in popularity. This year, drone light shows will be a regular part of the evening lineup from June 25 to July 31 at Dollywood, the family-themed amusement park owned by country music singing legend Dolly Parton.

Expect to hear more about drone-light shows in the future. Walmart just hosted a few drone-light shows at stores in other states. The evening skies also are lighting up with drone displays at the Santa Monica Pier in California this summer.

“Age of Drones” is an occasional feature, explaining how this evolving technology is having impacts on businesses, government and humanity.

END_OF_DOCUMENT_TOKEN_TO_BE_REPLACED

Benefitting the county, schools, and much more By Don Ireland   This year marks the 30th anniversary of casinos opening in the former little mining towns of Black Hawk, Central City and Cripple Creek, Colorado. In those early years, smoking was allowed inside ... END_OF_DOCUMENT_TOKEN_TO_BE_REPLACED

Where the dead get to tell their story By Jaclyn Schrock On Saturday, August 21, the Gilpin Historical Society held their annual Cemetery Crawl. Tickets allowed the shuttle of hundreds of guests from the Teller House parking lot to the Cemetery. Depending on v... END_OF_DOCUMENT_TOKEN_TO_BE_REPLACED