Judy’s not in Kansas anymore 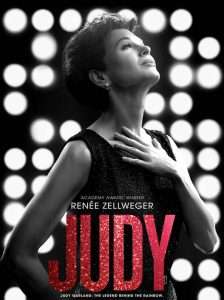 Judy Garland, born Frances Ethel Gumm, is famous for trotting down a certain yellow brick road at sixteen years old, before promenading her talent in “Babes in Arms,” “Strike Up the Band,” and “Ziegreld Girl,” leading to a long career in the entertainment industry. Hollywood’s darling girl-next-door came to a tragic end in her forty-seventh year after anoverdose of barbiturates, but her legacy in entertainment remained untarnished choosing to focus on her many films and songs instead of the real Judy hiding underneath the glitz and glamour. BBC Films produced a movie, “Judy” which sheds some light on the humanity of Judy, but Garland’s oldest daughter, Liza Minelli, a star in her own right, is quoted as saying she did “not approve nor sanction in any way” this film project. The studio took a few liberties with Judy’s story rearranges some bits of her timeline for the sake of the story and succeeded in creating a biopic unveiling the struggles of her life.

Judy, played by Renee Zellweger (“Here and Now,” “Bridget Jones’s Baby”), is striving to maintain a relationship with her two youngest children and find jobs when she is approached by an agent who convinces her that England is still enamored with her and clamoring for a tour. Judy leaves her children in the capable hands of her ex-husband, Sidney Luft, played by Rufus Sewell (“The Illusionist,” “A Knight’s Tale”), to embark on what would be her final concert tour. In London, Judy struggles to maintain an ambitious schedule while holding at bay the demons of uncertainty, meaninglessness, liquor, and drugs. The film takes an occasional pause in flashbacks from Judy’s teen years on the set of “The Wizard of Oz” tying those experiences to her adult behaviors.

Singing. Renee Zellweger spent a year with a vocal coach to prepare for this film and all the vocals are Zellweger’s. Although not a perfect match, she sounds close enough to Garland that it worked.

Acting. Zellweger’s portrayal of Judy comes straight out of videos from the final tour and interviews in her final year, capturing the jerkiness of her body movements. It would not be shocking to see Zellweger nominated for an Academy Award with this performance.

History. The film addresses Garland’s treatment at MGM Studios in the 30s and 40s which includes the strict diet, prescription pills to control weight, pills to keep her alert, pills to help her sleep, and hints at unwanted sexual advances. Unfortunately, this treatment was more common during the time than the public realized.

Holes. The person of Liza Minelli makes only the briefest of appearances and is never mentioned in the movie which is odd since the real Minelli would have been 23-years-old and making movies during Garland’s London tour.

Message. The movie ends with a quote by author L. Frank Baum, “A heart is not judged by how much you love; but by how much you are loved by others.” This is an incredibly depressing reflection on the human condition, but is an apt expression to describe Garland; the praise and adoration from an audience was more important to her than her personal relationships. This was something she was taught from an early age, so it is hard to fault her for it. However, if the quote is true, then the more famous you are, the better person you are. This is inherently false as our celebrities and athletes continuously fall off that pedestal we have put them on. Bill Cosby is an excellent example of a flawed individual who was very much loved, but his heart was not always in the right place. Our actions define who we are more than what other people think of us. We can present a wholesome, good-person public image, but if our actions do not support it, we are merely frauds.

“Judy” is a sensational look into Garland’s life as a person giving insight not just to her life, but to the culture of movie studies for women. The feminist message was not preached and probably not the purpose for the film, but it made a definitive equal treatment statement. The SAG-AFTRA labor union now prevents the kind of treatment and working hours Garland had to endure. The acting is very good, and the film is edited well for pacing. It is rated PG-13 for substance abuse, thematic content, some strong language, and smoking (lots of smoking). I enjoyed the film, but then, I enjoy tragedies. My lovely daughter rates the film four out of five scarves, and I rate the film four out of five sleepless nights.

END_OF_DOCUMENT_TOKEN_TO_BE_REPLACED

Where the dead get to tell their story By Jaclyn Schrock On Saturday, August 21, the Gilpin Historical Society held their annual Cemetery Crawl. Tickets allowed the shuttle of hundreds of guests from the Teller House parking lot to the Cemetery. Depending on v... END_OF_DOCUMENT_TOKEN_TO_BE_REPLACED