Joy and laughter from the Peak to Peak Chorale 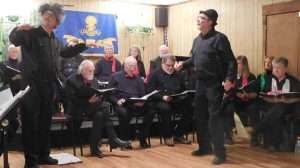 The Peak to Peak Chorale wrapped up the final performance of their annual holiday musicale on Friday, December 7, at the Golden Gate Grange, delighting the audience with traditional holiday tunes surrounding a depiction of George Blevins’ mountain Christmas tale “Little Eddie & Armetus.” George Blevins is an illustrator and author of several comic strip books and a Gilpin County librarian since 1992. Chorale Director Jane Wyss and Association President Marith Reheis adapted the comic-strip to live performance utilizing the many talents found in Chorale members.The story features two mountain-bred friends, Armetus and Little Eddie. Little Eddie has recently moved back to the mountains after spending some time down the hill and is suddenly snatched from a local tavern, so Armetus, who is three sheets to the wind, launches out into the winter storm to find him. Although his search is fraught with mishap and hallucination, Armetus eventually catches up to the thugs that carried Eddie away and is himself captured and put to work cleaning the place up. Armetus eventually puzzles out what is going and uncovers an amazing Christmas secret.

The Chorale punctuates the story with songs in and out of season that connect to the tale. The evening begins with “Sing, Sing Noel,” a traditional high-energy carol followed by lesser known “Winter Wind,” a song lifted from the pages of Shakespeare’s “As You Like It” referencing the strong mountain winds. A jazzy “She’ll Be Comin’ Round the Mountain” is next with a variation on the third verse about chicken and dumplings. Wyss gets creative with the lyrics to “Come and See the Baby” by Ruth Morris Gray, changing them to suit the story and instead singing “Tell Me Where is Little Eddie?” Relevant to the story, but not the season, the next song is an excerpt from Pink’s “Try.” During Armetus’ hallucinatory period, he puts words in the mouths of birds so naturally the chorale sings “Bird’s Courting Song” by Barbara Harlow. When all seems lost for poor Armetus, the chorale launches into a song originating from a poem scratched into a wall by a Jewish prisoner in Auschwitz, later set to music by Mark Miller. “I believe in the sun, even when it is not shining. I believe in love, even though I don’t feel it. I believe in God, even when He is silent.” Returning to a holiday theme, the next song features Bruce Parman soloing with his guitar backed by vocal oohs from the chorale on “Pretty Paper” by Willie Nelson (originally written by Nelson for Roy Orbison in 1963). As awareness dawns on Armetus and he begins to suspect everything will be okay, the chorale embraces the African spiritual “I’ve Got Peace Like a River”; and then as the story resolves, we go into the upbeat and familiar “Here Comes Santa Claus.” Staying on a positive theme, the chorale sings “Swingin’ Saint Nick” followed by an audience sing-along “Christmas is Coming.” As an encore, they encourage the audience to join in a rousing rendition of “Joy to the World.”

Notable performances were made by Rob Knowlton who played Armetus, Dave Josselyn who played Little Eddie, and Bill Miller who played an inebriated bird drinking his own homemade hooch. Miller was especially delightful when he stepped out of his comfort zone to be featured in a duet with Joseane Motchan. The true joy of the evening was seeing long-time married couple Joy and Bob Kaylor argue with each other playing tavern patrons. The Peak to Peak Chorale is not perfect; they do not hit every note, some lines are flubbed, and several read right from the script, but this is a non-profit volunteer group of folks that just enjoying singing and the enjoyment shines through during the performances. The energy and excitement they show makes up for the occasional unprofessional moments. Audience members soak it up and consistently respond with praise and accolades for the group. At the end of the evening after all the laughter, joy filled the performance hall.

If you have a love of singing and would like to be involved, the Peak to Peak Chorale meets at the Gilpin Library every Wednesday evening at 7:00pm. They are on a short break right now but will start again in mid-January.

END_OF_DOCUMENT_TOKEN_TO_BE_REPLACED

Where the dead get to tell their story By Jaclyn Schrock On Saturday, August 21, the Gilpin Historical Society held their annual Cemetery Crawl. Tickets allowed the shuttle of hundreds of guests from the Teller House parking lot to the Cemetery. Depending on v... END_OF_DOCUMENT_TOKEN_TO_BE_REPLACED