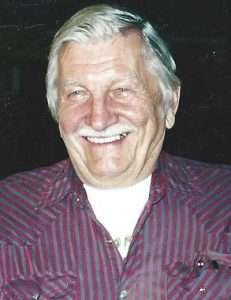 John Chadwick “Bert” Bertram, 88, of Las Vegas, Nevada, passed away peacefully surrounded by his family on Tuesday, December 29, 2020. A memorial mass will be held on Saturday, January 23, at St. Elizabeth Ann Seton Catholic Church in Las Vegas with the Rev. James Jankowski officiating. There will be a military graveside service this summer in Denver, Colorado. Bert was born December 22, 1932 at 12:22 pm in Minneapolis, Minnesota to Russell and Esther (Carlen) Bertram. He served in the United States Navy as an aviation structural mechanic in the Helicopter Anti-Submarine Squadron from March 1952 –March 1956.

He married Mary Jane (Funk) Bertram on November 10, 1956 at Corpus Christi Catholic Church in Colorado Springs, Colorado. They divorced after 27 years of marriage. They raised three children, Carrie, Chad, and Patty Jo. Bert loved the Colorado mountains and in 1967 they moved to Gilpin County where he built the family home and business. He owned Bert’s Automotive, an automotive repair and towing business until 1976.

He started the Colorado Sierra Fire Department and was the volunteer fire chief, volunteer ambulance driver, Commander of the Search and Rescue Group, an Emergency Medical Technician, and Paramedic. He was a Gilpin County Deputy Sheriff before being named as the Undersheriff under Sheriff Dick Conn.

After leaving Gilpin County he started Bert’s Volkservice, a Volkswagen repair shop in Denver. He enjoyed racing as a young man and eventually started the Colorado Off-Road Racing series. This series involved over a hundred racers including his family and friends. When Bert retired, he drove his motor home around the country attending racing events and visiting family. Bert lived in his motor home in Las Vegas until a few months before his passing.

Bert is survived by his daughter, Carrie and son John “Chad” (Wei) both of Las Vegas, six grandchildren – Adam, Natalie (Kyle), Jonathan, Rachel, Caitlan, and Julia; four great grandchildren – Roland, Sidney, Declan, and Luca. He is also survived by his sisters Nancy Pewterbaugh of Broomfield, Colorado, Anita (Don) Patrick of Aurora, Colorado, and sister-in-law Carol Grigus of Reno, Nevada, as well as several nephews and nieces. Bert was preceded in death by his daughter, Patricia “Patty Jo” and his brother, William “Bill” Bertram.

Bert, Dad, Grandpa Bert – you are missed and will live in our hearts forever!

END_OF_DOCUMENT_TOKEN_TO_BE_REPLACED

Where the dead get to tell their story By Jaclyn Schrock On Saturday, August 21, the Gilpin Historical Society held their annual Cemetery Crawl. Tickets allowed the shuttle of hundreds of guests from the Teller House parking lot to the Cemetery. Depending on v... END_OF_DOCUMENT_TOKEN_TO_BE_REPLACED