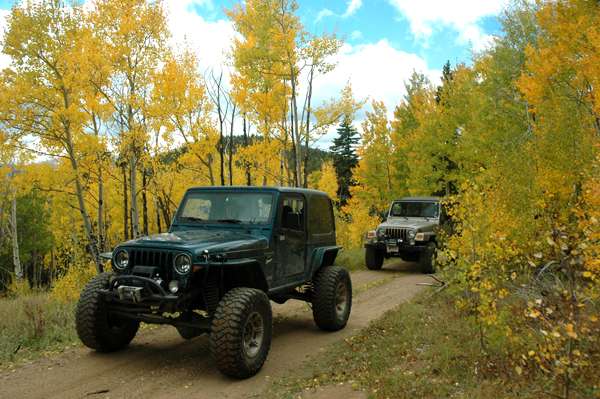 Needing a change of pace from the office and computers, there’s nothing like getting out on the trails in the Jeep, motorcycles, or ATV’s and enjoying the awesome fall weather and colors. We took a few days off, and Robin and I completed a 3-day Jeep trip running some local trails with friends Ron & Becky Anderson from Madison, WI. The Jenny Creek trail on the way to Rollins Pass from Tolland, and the Bill Moore Lake trail near Empire are always fun and a couple of our local favorites, but we’ve explored those so many times that we decided to run some trails that we hadn’t run for a few years instead. Though rated difficult, we chose the Spring Creek trail starting at Downieville and up and over to Georgetown on Saxon Mountain for the first day. All went well, but after negotiating the technical rock climbs, there were a few branch trails that were not marked and we ended up on a dead-end just above the Georgetown Lake and had to backtrack on a narrow shelf trail, with the tires sometimes hanging off the edge. While enjoying dinner and discussing the day’s adventure at Tommyknockers in Idaho Springs, we decided to try something a little easier the next day.

So even though it was rated difficult as well, we chose the Pickle Gulch trail for Saturday’s adventure which starts near Missouri Gulch and after getting to the peak and top of the world, spent the rest of the day trying new branch trails with great views from Apex all the way over to Rollinsville, and finishing up on the West Magnolia trail near Nederland, followed by tasty pizza at Roy’s Last Shot.

On Sunday, we wanted to try something completely new, so went to Empire and south to run the heavily wooded Democrat and Republic Mountain trails which were rated as only moderately difficult. They had great vistas overlooking Saxon Mountain and Georgetown Lake on one side, and Jones Pass on the other at the top, but it’s only a one-way trail with few turn-outs, so vehicles had to back up for up to 1/8 of a mile when meeting other vehicles. After coming back down, we headed back up another forest service trail until it petered out, so finished up and head to Georgetown for a nice Italian dinner at the Alpine Restaurant & Bar.

It’s always nice to enjoy a day away from the office, and even nicer to spend the time with friends too!

END_OF_DOCUMENT_TOKEN_TO_BE_REPLACED

Benefitting the county, schools, and much more By Don Ireland   This year marks the 30th anniversary of casinos opening in the former little mining towns of Black Hawk, Central City and Cripple Creek, Colorado. In those early years, smoking was allowed inside ... END_OF_DOCUMENT_TOKEN_TO_BE_REPLACED