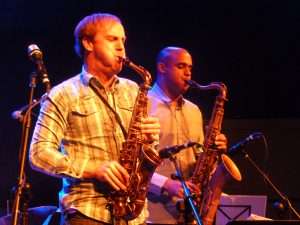 Hoping to begin a musical revival By David Josselyn On Saturday, August 9, 2014, the Cultural Economic Development Association (CEDA) presented the Central City Jazz Revival Concert featuring the Annie Booth Trio, Josh Quinlan Quartet, Convergence with special guests Lisa Kelly and J. B. Scott, and the Jayme Stone Quartet. The concert was held in the very appropriately intimate venue of the Lava Room in the Reserve Casino. Subtle smoke machines wafted harmless clouds through the room reminding one of the smoke filled bars of jazz concerts from decades gone by. For seven solid hours, dissonant chords, free-form scatting, and the beautiful sounds of professionally played instruments embraced the Lava Room. The bands were perfectly organized from the simplicity of a trio to the complexity of multiple brass and stringed instruments, which encouraged folks to stick around as each band built upon the last. The traditional instruments and vocals were heard, but quite unexpected was the appearance of a banjo as the featured lead instrument as well as a flute, uncommonly heard in jazz, in the Jayme Stone Quartet. The Quartet also added a clarinet to the mix. One might think these instruments odd for the music, but jazz is built upon improvisation and free-form. Somehow it worked. Somewhat unique to jazz, the musicians didn’t care if there were five people in the audience or fifty; the smiles on their faces and the fervor of their performance conveyed the love they have for the art. It was all about the music. About 100 people attended the event although only a hardy handful stayed for its entirety. Jazz music was founded in the United States by the African American communities of the South. As jazz grew in popularity across the country, Central City became a focal point of the genre in the area. Robert Fejeran, President and CEO of CEDA, organized this event in an effort to revive jazz in the City. “It’s about the past” stated Fejeran, and that jazz “attracts all demo’s (demographics) and locals.” CEDA’s goal for Central City is to expand the demographic of people coming into the city from the 45 and older crowd to young adults and families. CEDA, founded in Central City in 2013, has caught the attention of other small and rural communities such as Georgetown, La Junta, and Steamboat Springs. Fejeran has his Master’s in planning and his desire is to help communities such as Central City grow into their economic and cultural potential. The Jazz Revival Concert is CEDA’s first step in realizing that vision and Robert hopes to expand the event next year to include other venues in the area.

END_OF_DOCUMENT_TOKEN_TO_BE_REPLACED

Where the dead get to tell their story By Jaclyn Schrock On Saturday, August 21, the Gilpin Historical Society held their annual Cemetery Crawl. Tickets allowed the shuttle of hundreds of guests from the Teller House parking lot to the Cemetery. Depending on v... END_OF_DOCUMENT_TOKEN_TO_BE_REPLACED

Benefitting the county, schools, and much more By Don Ireland   This year marks the 30th anniversary of casinos opening in the former little mining towns of Black Hawk, Central City and Cripple Creek, Colorado. In those early years, smoking was allowed inside ... END_OF_DOCUMENT_TOKEN_TO_BE_REPLACED