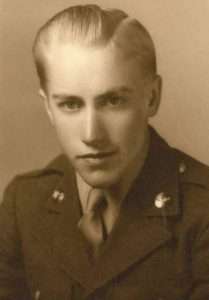 James Edward Rusk, 89, of Golden died Saturday, Feb. 13, 2016. Jim was born April 25, 1926 in Dayton, IN, the son of Earl and Imo Rusk. He graduated from Dayton High School and enlisted into the service. He served in the US Air Force in WWII, Vietnam War and Korean War as he made service to his country as a lifelong career. He retired from the US Air Force as Master Sergeant in 1972.

Jim resided in Coal Creek Canyon for over 40 years. He loved the Colorado Mountains, wildlife, gardening, and watching westerns on TV. He had great neighbors that helped him out in his later years and he was a father figure to many of them.

He was preceded in death by his parents, his wife, Iris, siblings Gordon, Helen, Doris and Imogene, and a nephew Kevin.

A full military honors graveside funeral will be held on Friday, March 11, 2016 at 9:30 a.m. at Fort Logan National Cemetery in Denver, Colorado.

END_OF_DOCUMENT_TOKEN_TO_BE_REPLACED

Where the dead get to tell their story By Jaclyn Schrock On Saturday, August 21, the Gilpin Historical Society held their annual Cemetery Crawl. Tickets allowed the shuttle of hundreds of guests from the Teller House parking lot to the Cemetery. Depending on v... END_OF_DOCUMENT_TOKEN_TO_BE_REPLACED

Benefitting the county, schools, and much more By Don Ireland   This year marks the 30th anniversary of casinos opening in the former little mining towns of Black Hawk, Central City and Cripple Creek, Colorado. In those early years, smoking was allowed inside ... END_OF_DOCUMENT_TOKEN_TO_BE_REPLACED