I’ve got a brand new pair of roller skates… 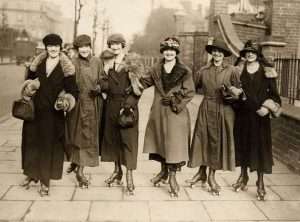 In late 1871, J.C. Fisher opened the new Black Hawk Roller Skating Rink on the corner of Gregory and Church Streets. The location was, perhaps conveniently, one door east of Dr. W.H. Rice’s office. Admission to the rink was initially twenty-five cents while the use of roller skates was an additional quarter, but this was eventually dropped in favor of a fifty-cent admission fee that included the use of skates. Tickets for twenty visits to the rink were $4 for women and $7 for men, use of skates included.

The opening of the Black Hawk Roller Skating Rink came just six years after the first public roller skating rink in the United States opened in New York in 1866. The first recorded use of roller skates came in 1743 in a London stage performance, but few details, including who

invented that pair of roller skates, are known. In 1760, John Joseph Merlin created a primitive roller skate that was similar to modern inline skates. In 1819, M. Petibled of France patented a pair of inline skates, but with no real way to turn them, wearers were forced to travel in straight

lines with the occasional wide, sweeping turn. In 1863, James Leonard Plimpton of New York patented the four wheel, or quad skate. Plimpton’s revolutionary design allowed skaters to turn by leaning to one side or the other. Improvements to the wheels and the invention of the toe stop in 1876 led to the roller skates that enthusiasts are familiar with today.

J.C. Fisher advertised his rink in the Daily Central City Register on an almost daily basis throughout 1872, but by early 1873 he was gone from the business. In March of 1873 Standish and Crawford announced that they had bought out Fisher. They reopened the rink to the public

on April 1. In their first advertisement, they stated that they proposed to make the rink “a popular place for healthful pleasure,” with Standish in charge of daily operations. Tickets for twenty visits remained $4 for women, but dropped to only $6 for men. The new owners also

reinstituted the separate quarter fees for admission and the use of roller skates. Skating went

until 10 p.m. each night followed by a dance.

Not to be left out, organizers opened a skating rink in the old Turner Hall on Gregory Street in Central City about the same time as the Black Hawk rink. But, as has so often happened with roller skating, the sport went through a downturn with people quickly losing interest and both rinks closing by the late 1870s or early 1880s.

In the early 1900s, interest in roller skating revived, and Gilpin County was ready to roll once again. In late December 1907, Fred W. Dolley rented Armory Hall in Central City and converted it into a skating rink, drawing a large crowd where many of the “old time lovers of the sport were out and got their money’s worth,” while kids seemingly took great joy in falling. Large crowds continued to enjoy the new rink, and in early 1908 he held a masquerade ball at the rink. The best dressed man and woman each won a new pair of ball bearing skates, while the most comically dressed man and woman received season tickets to the rink. At a second masquerade a few weeks later, the best dressed man and woman each received $10 in gold while the best comically dressed still received season tickets.

Business was so good at Central City’s new rink that in early February 1908 it was in need of a new home. Some speculated that Dolley and the other backers would buy Armory Hall outright and put an addition on it, while the Gilpin Observer speculated that the group might buy the opera house and convert it into a rink. Eventually, Dolley moved the rink to the old Turner Hall, home of Central City’s first roller skating rink in the 1870s. He installed a new floor over the old one and removed the stage that was in the building, creating a skating rink that was 50 feet by 60 feet. The roller skating rink at Tuner Hall lasted until about 1912, but Dolley left it after the 1910 season in order to travel the United States as a professional roller skater for several years before opening a pool hall in Tolland.

In February of 1908, Thomas Dunstone and his skating club leased the old Presbyterian Church in Black Hawk from the school board, which then owned it, for the purpose of converting it into a roller skating rink that would be 34 feet by 59 feet. They hired Glanville and Peeck to lay a new maple floor and ordered “a large number” of steel ball bearing roller skates, which had been patented in 1884 by Levant M. Richardson and allowed for even greater speed. While the Gilpin Observer praised the initiative the men showed, one angry resident wrote that it was to the “disgust of the community” that public school property had been turned into a sporting house, and that the city had sunk to such depths in order to “keep floors in our Public School property.” Despite opposition, the rink seems to have lasted until about 1914.

Russell Gulch was not left out of the skating craze either. Louis Cattani leased the old school house there in early 1908 and turned it into a skating rink as well, which the Gilpin Observer reported was “greatly enjoyed.” Cashing in on the craze, jeweler Aime Rapin devoted part of his store on Main Street in Central City to selling roller skates.

As so often happened with roller skating, though, another downturn in interest in the pastime led all of the rinks to close by about 1915. The advent of carhops in the 1950s led to another revival, but by then roller skating in Gilpin County was largely confined to high school students in the school gym. But, for a few brief years, rolling over specially laid wooden floors while listening to live music brought great joy to many residents of Gilpin County.

END_OF_DOCUMENT_TOKEN_TO_BE_REPLACED

Benefitting the county, schools, and much more By Don Ireland   This year marks the 30th anniversary of casinos opening in the former little mining towns of Black Hawk, Central City and Cripple Creek, Colorado. In those early years, smoking was allowed inside ... END_OF_DOCUMENT_TOKEN_TO_BE_REPLACED