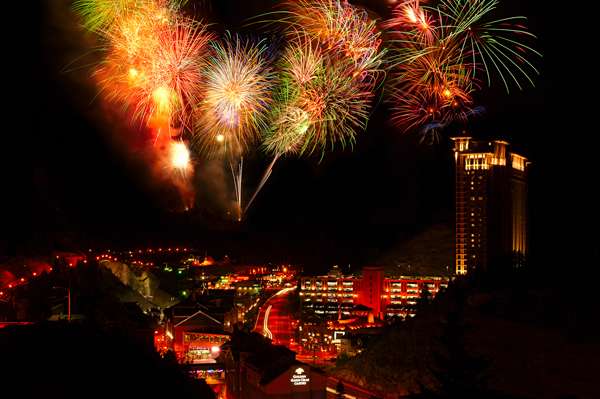 “And the rockets’ red glare, the bombs bursting in air, gave proof through the night that our flag was still there…”

Gilpinites and metro visitors will be joining folks all over the nation in celebrating Independence Day with fireworks. The show takes place on Monday, the 4th of July, with 1,800 explosive shells rocketing skyward starting at about 9:30, weather and fire restrictions permitting. Make sure to get there plenty early, as spectators by the thousands will be lining the sidewalks, parking lots, casino rooftops, and roadways leading into Black Hawk.

The Casey promontory and Miners Mesa are the launch sites for the fiery aerial pyrotechnics. Jack Lewis, Black Hawk City Manager, assures, “Black Hawk’s signature grand finale has become the most dynamic finale in the State of Colorado. This year’s enhanced finale will echo reverberating thunder through the valley, bringing a thrilling conclusion to the City of Black Hawk’s 2016 Boom Town Fireworks Spectacular.”

The City of Black Hawk first budgeted fireworks in 1993, and its show is now the largest in the state, according to City Clerk Melissa Greiner. Longtime fireworks vendor Western Enterprises, Inc. will be the supplier once again. Western’s Jim Burnett praises Black Hawk’s willingness to provide support services to his crew to help ensure the event’s success.

Burnett says, “I can assure you that we are committed to staging an evening of pyrotechnic magic for your audience. We feel great pride to have the privilege of staging what has truly become the most spectacular production in the state. There is absolutely nothing like Black Hawk’s Boom Town show anywhere, and it is our endeavor to keep elevating the show to an unmatched level of prominence and uniqueness.”

New last year were the dual competing locations for the finale. This year’s program is enhanced even more, but what’s actually happening is secret, notes Greiner. Sounds intriguing.

So come thrill to a barrage of artillery shells, starbursts, comets, glitter, and Roman candles. Hear the crack of the salute and feel the “boom” as the bombs go off. Feel the goosebumps at the rapid-fire finale. Detect the acrid smell of sulfur lingering in the air.

Make sure to add the complete experience of this year’s fireworks to your celebration of our nation’s freedom. It’s the perfect way to rock the summer.