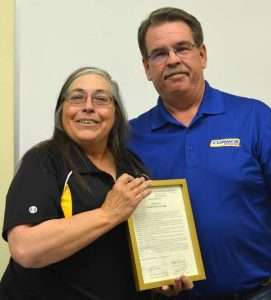 Charlotte Taylor has helped steer the ship of the Gilpin County RE-1 school district for the past eight years as a vital member of the school board. Taylor’s term of service was completed with the November 7 board meeting, during which her fellow members and the assembled public celebrated her many contributions. School board president Craig Holmes presented Taylor with a framed resolution proclaiming November as “Charlotte Taylor Recognition Month.”

Taylor shared recently about her life’s journey, how she became involved on the school board, and what she has helped accomplish during her tenure.

Taylor was born in Memphis, Tennessee, moving several times during her girlhood due to her father’s jobs. In Memphis, she attended Graceland Grade School, which was in Elvis Presley’s neighborhood and named for the legendary singer. She also lived in small towns in Missouri through her high school graduation in 1969.

Taylor attended college during the era of student activism. She went to the University of Missouri in Columbia for two years, then dropped out at the end of 1971. She attended Lincoln University in Jefferson City for about a year, which was still during this turbulent period.

“It was a counter-culture thing. I had done some demonstrating at the university. Through the ‘60’s and early ‘70’s, there was a big mainstream emphasis on conformity. The feminist movement and civil rights groups like the Black Panthers were organizing. There was a really big frustration of having concerns taken seriously. That kind of formed me.”

Taylor found herself dissatisfied with the educational process and moved to Denver with a friend of hers.

Eventually, Taylor landed a job at the Weekly Register-Call in Gilpin County. She was hired in 1990 as a reporter, at the time that the push for gambling began in Central City and Black Hawk. Gambling was voted in in November 1990 and preparations made during the next year. Opening day of gambling was October 1991.

Early in 1992, senior staff at the newspaper left for various reasons, leaving Taylor the editor. It was quite a learning curve. She had to figure out how to do her new job and how to cover the rapidly developing culture that was replacing our sleepy little county.

“It was a tumultuous time,” she recalls.

Taylor remained with WRC through November 1999, then felt it was time to move on. There were changes at the paper and in her personal life. Her mother was quite ill, and just when Taylor was preparing to go back to Missouri to help, her mother died. Taylor ended up staying in Missouri to help her father.

“I felt that my dad needed more of my presence. My mother died right before their 50th anniversary. But he made a good life for himself and was able to make the transition successfully.”

Taylor returned to the University of Missouri in 2001, but changes were again taking place in her life.

“I had gotten remarried, but while I was at the university, my husband died of cancer. I took time off of school to be with him during his last years, then resumed my studies. It was a very interesting experience. There were all these young students and me – I was around the age of 50!”

She graduated with degrees in journalism and women’s and gender studies.

“I saw a difference between what we are taught to believe and what most of us think of as natural behavior,” she states. “It’s good reinforcement for an old hippie if things aren’t always what they seem. Things that we believe without question ought to be questioned.”

Over the years, Taylor held a variety of jobs. She worked in restaurants, at Wal-Mart, and at Dostal Alley. She served at the Gilpin Clerk and Recorder’s office for seven years before retiring. Recently, she began working part time at the Sasquatch Casino a couple of days a week.

Taylor enjoys talking about her three daughters, all of whom were born here and attended Gilpin County School. The older two, twins Barbara and Mary, transferred to the school house in Central City during their senior year. The youngest, Sarah, graduated as salutatorian of Gilpin County High School. Now grown with their own families, they have all settled in the western United States.

While her daughters were Gilpin students, Taylor began serving on the school board. She has served twice, feeling both times that there were issues that needed to be addressed.

“People were feeling disenfranchised back in the late 1990’s. I had been on the accountability committee since my older girls were in first grade and was very active with that group for several years. I wasn’t pleased with the direction that the school was moving in.”

She ran for the board in 1997 and was elected. That was the first year that the district put a bond issue on the ballot to build the newer part of the school. It didn’t pass. Part of the reason, Taylor says, was that the vote was a commentary on how people felt things were going at the school.

After Taylor was elected, she suggested that each board member bring in a list of people they felt were influential in various parts of the community. The board members then held focus groups to talk about questions and concerns they had about the bond issue. It was a lot of work, Taylor says, but it got the job done. The bond issue passed and work began on building the new part of the school. During that period, some changes were also made in the school’s philosophy.

Taylor served through October 2000, when she moved back to Missouri. Following her graduation from the university, she returned to Gilpin and realized that there was turmoil at the school again. High school students were leaving to go to school elsewhere, because offerings at Gilpin had been cut. She joined the accountability committee and was liaison to the school board, then ran for the board again and got elected.

“The first thing to do was hire a new superintendent, because the old one had left. Ron Slinger and Craig Holmes had worked with Black Hawk to develop the educational enhancement fund. The board needed to reverse many of the cuts that had been made and make programs at Gilpin more viable.”

She adds, “There were some bumps along the way, but during those eight years, we got from the elementary school being on an improvement plan to where we are now – a school of distinction and rated eighth in the state by School Digger (a company that ranks schools based on test scores). Everyone on the board during those years was committed to providing a quality educational experience in Gilpin to make it a school of distinction that people would choose to attend.”

She feels that the current phase of site improvements is exciting, with the most visible improvements being the upgrade to the football field, including the installation of a track.

“Given the fact that these improvements were being achieved during a period when the legislature was cutting money to every district across the state, it’s quite an accomplishment. I’m happy to be part of that, and I feel that I am leaving the district in better shape than when I came.”

What is in the works for Taylor now?

“I am still active with the Elks Lodge. I try to spend time with my father several times a year. I have children all over the western part of the country. So I have enough to keep me busy!”

Taylor summarizes her philosophy of education in what she calls her “soapbox speech.”

“I truly believe in public education in America. Free public education is one of the lynch pins of our democracy. Without a quality free education offered to all, this country would not be what it is today. It is something we need to take care of and make sure is always available. It is the only way for everybody to learn what it means to be an engaged citizen.”

The school board’s accomplishments during Taylor’s service include the November 1998 construction bond, the 2009 Black Hawk Educational Enhancement Tax, and the 2017 district “Accredited with Distinction” status.

The board’s resolution presented to Taylor proclaims: “Her leadership has made a profound difference in the lives of Gilpin County School students, staff, parents, and patrons.”