It’s better down where it’s wetter! 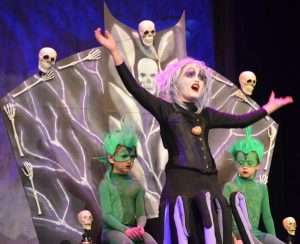 Life is the bubbles under the sea. But if you happen to be a teen mermaid, and you try to check out life in the human realm, the waters can get choppy. Of course, that oceanic conflict made for a great story in “Little Mermaid Jr.,” presented last Friday, November 16, and Saturday, November 17, by Peak to Peak Players in the Gilpin County School auditorium. The young students played to a full house and received a standing ovation for their efforts.

The level of talent that is beginning to surface in this fairly new group of elementary-age children is truly amazing. With each production they’ve done so far, they sing, dance, and do both comedy and drama at a pretty professional level. Several older students make up the stage crew and run lights and sound. A “cast of thousands” of volunteer adults direct, choreograph, create costumes and sets, do hair and makeup, and much more. Gilpin County is privileged to have a program of this caliber for its children and to have the opportunity to attend such quality productions.

Disney’s “The Little Mermaid” has been around since 1989, and most of us are familiar with this enchanting story, which is based loosely on the classic tale by Hans Christian Andersen.  Ariel, a beautiful young mermaid, lives in a magical underwater kingdom. She’s the girl who has everything, but she wants more. Fascinated with the human world, she falls in love with the handsome Prince Eric. In order to leave her ocean home and live in the world above, she must defy her father, King Triton, make a deal with the evil sea witch, Ursula, and show Eric that she’s the girl with the captivating voice he’s been seeking.

It’s easy to simply enjoy a performance without considering the months of hard work involved in pulling it off. Last March, work began on the elaborate costumes, sets and props. Children auditioned for their roles, music practice began, and parents’ homes became workshops cluttered with papier mache, pool noodles, and paint. Rehearsals took place for the past two months on evenings and Fridays during the day for several hours.

Jacquelyn O’Brien directed the production. She and the other Peak to Peak Players principals wanted the kids to try a musical that would challenge them and give them a chance to shine, and after considering several titles, “The Little Mermaid Jr.” won the part.

“I’m happy to say our kids have risen spectacularly and have worked incredibly hard over the last two months to bring this story to life,” she said.

O’Brien credited numerous individuals whose assistance made the production a success. In particular, Kayce Harmsen served as costume designer. She created all of the costumes with the able assistance of Becky Dwyre. Mermaid costumes, chefs’ hats, sea creatures, crab claws, ball gowns, and sailor uniforms all took shape with her busy sewing machine. Harmsen took ideas from the Disney production and ordered fabric well in advance to take advantage of discounts, noting that the costumes are the most expensive part of a production.

Harmsen was also the lead set designer. For the iconic scene where the Little Mermaid perches on a large rock looking out to sea, she repurposed a large papier mache boulder from the Peak to Peak Players’ August performance of “The Wizard of Oz.” She purchased oodles of pool noodles before they went out of season and fashioned them into colorful sea plants. Students waved a stage-length bolt of blue fabric up and down to simulate rolling waters. Other sets included a tall throne and bubbling cauldron for the sea witch Ursula, Prince Eric’s ship, and the castle kitchen where the head chef was busy plying his cleaver, to the horror of Sebastian the crab. Several adults and students constructed the sets.

Chip Smith took on the huge role of musical director. “He’s amazing,” O’Brien said. “He’s very professional, having taught and performed for many years. He has that hard-to-find value of being strict and fun at the same time and creating a connection with the kids.”

Kris Icenogle tackled the task of watching over the kids waiting their turns during rehearsals, which was greatly needed when O’Brien was the only other adult.

O’Brien commented on working with the children. “It’s wonderful but exhausting. It’s fun to watch their progress, especially the new kids. At first, they have no clue where stage left is from stage right, or anything else. By the end, they own their characters, and they learn more each year.”

The young actors had no difficulty finding their voices for comments after the musical.

“It was really fun doing Ursula,” Adele Fisher enthused. “I auditioned for the part and did well on the reading.”

Killian O’Brien played Ariel. “I loved doing it. I think the other cast members did an amazing job. The hardest part was the costume changes!”

Special thanks went to Gilpin County School, Gilpin Education Foundation, and Gilpin County Booster Club, along with a host of parents and community members.

END_OF_DOCUMENT_TOKEN_TO_BE_REPLACED

Where the dead get to tell their story By Jaclyn Schrock On Saturday, August 21, the Gilpin Historical Society held their annual Cemetery Crawl. Tickets allowed the shuttle of hundreds of guests from the Teller House parking lot to the Cemetery. Depending on v... END_OF_DOCUMENT_TOKEN_TO_BE_REPLACED

Benefitting the county, schools, and much more By Don Ireland   This year marks the 30th anniversary of casinos opening in the former little mining towns of Black Hawk, Central City and Cripple Creek, Colorado. In those early years, smoking was allowed inside ... END_OF_DOCUMENT_TOKEN_TO_BE_REPLACED