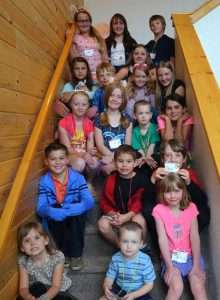 Kids have a whale of an adventure at Vacation Bible School

Elementary kids grabbed their snorkels and unrolled their beach towels at Ocean Commotion Vacation Bible School during the evenings of July 18-22 at Christ the King Community Church. 22 youngsters explored the full Biblical account of Noah and the Flood found in the book of Genesis.

Highlights surfaced throughout the week. The kids moved and grooved as they sang “Rock the Boat” and “Billions of Dead Things” (referring to fossils!), plus the beautiful “Trusting My Life.”

Daily animal pals, like Hydro the Whale and Paws the Sea Otter got the lesson points across each day in a memorable way.

Members of the church’s youth group told the story of pre-Flood days in an Eyewitness News skit, and “guest speaker experts,” in the roles of a scientist and a detective, related the size of the ark and fossil evidence supporting the Biblical account of the Flood. The scientist showed how all of the animals could have fit on the ark with room to spare. The detective shared evidence of how fossils and geological features can be formed quickly, like in a world-wide flood. The children themselves acted out the parts of Noah, his family, and the animal pairs getting on the ark.

The kids learned how they could be like Noah, who stood for God when no one else in his culture would do so. He demonstrated obedience when he built the ark. The kids also found that God saved Noah through the ark during the Flood’s destruction, and Noah expressed his thanks for that salvation as he disembarked after about a year of riding the ark on the waters. The rainbow was the sign of God’s promise never to destroy the earth again with a flood.

The children also discovered that because God loves us, he provides the way for us to be saved today by sending Jesus Christ to die for our sins and rising from the dead. We have the same choices today that the people of Noah’s time had: to trust in God and live for him, or to go our own way.

High-tide games like crab soccer, octoball, and relay races were played, followed by a cool-off time as kids found out during “creature feature” about some amazing animals God created.

The kids earned prizes each evening for participating in fun contests, including making posters, dressing as their favorite animal, and looking up verses on being thankful.

To add to the interest, the boys and girls heard about the July 7 grand opening of a life-size replica of the ark in northern Kentucky, which was constructed by the ministry Answers in Genesis.

Even the weather provided an appropriate backdrop for the focus on the Flood. When the lessons talked of the “fountains of the deep and the floodgates of heaven” being opened, there was real thunder and lightning and torrents of rain. When the lessons told of God stopping the rain and sending a wind to make the waters recede, the weather was quiet. A rainbow even appeared to reinforce God’s message of his love and faithfulness.

The kids joined in their choice of two mission projects. The first was collecting men’s socks to donate to Christ’s Body Homeless Shelter in Denver; one of the church members is a regular volunteer at the shelter and presented this need. The VBS gathered 113 pairs of socks, two pairs of gloves, and one shirt. And, with an ocean theme, the second mission was donating money to a clean water project carried out by the Christian organization Samaritan’s Purse. $80 was contributed, which will assist four families to have clean water each day and avoid disease and death caused by dirty water.

A closing program Friday evening concluded the event, with the children performing songs they had learned and receiving certificates and special prizes for participation. The families in attendance enjoyed an ice cream social and saw a video presentation of the week’s activities.

Christ the King Community Church is a non-denominational church located at 971 Highway 46 across from the Gilpin County Fairgrounds. Sunday services are at 10:30 a.m. For information, see www.CTKonline.com/BlackHawk.

END_OF_DOCUMENT_TOKEN_TO_BE_REPLACED

Benefitting the county, schools, and much more By Don Ireland   This year marks the 30th anniversary of casinos opening in the former little mining towns of Black Hawk, Central City and Cripple Creek, Colorado. In those early years, smoking was allowed inside ... END_OF_DOCUMENT_TOKEN_TO_BE_REPLACED