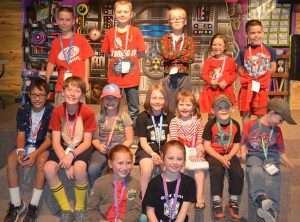 Wouldn’t it be amazing to travel back in time and witness epic events in history? Last week, several Gilpin County kids did just that, as they traveled to the past and future at Time Lab Vacation Bible School.

Christ the King Community Church hosted the free event for kids from preschool through sixth grade during the evenings of July 9-13. The children embarked on an adventure of interactive Bible lessons, games, “creature features,” contests, missions, music, drama, and tasty snacks presented by a friendly crew of the church’s youth and adult volunteers. The church was decked out as a laboratory, with backdrops of clocks, beakers, gears, pipes, the Periodic Table of Bible Elements, and a chalkboard covered with scientific equations (pointing to “back-to-school” time!).

Each evening started with an engaging skit presented by the teens. The kids were introduced to the daily theme with the help of a wacky scientist character named Dr. Mister who proudly showed off his latest innovations, only to discover that his creations had already been accidentally invented. He finally came up with a contraption that changed one food into another. Brussels sprouts “magically” turned into marshmallows, and Dr. Mister had a hit on his hands. The kids learned that God is the original creator who has given us our creative abilities.

Then it was time to sing and praise God with joyous clapping, whirling, and bouncing up and down to the “Time Lab Theme,” “Rock of Ages,” and “High Places.”

Bible lessons featured the main points of the gospel message. Teachers used words beginning with “C” to help their students remember that Jesus has been with us always.

Creation was presented on day one, as the group talked about Jesus’ existence before time and his activity at creation.

“Christophany” was a big, cool word the kids loved learning on day two. It means that the Son of God didn’t start as a babe in a manger, but has been around forever, actively involved throughout history. The children studied Bible accounts of God’s Son appearing to Abraham and Moses before his New Testament advent.

Day three presented the message of the Cross and told how Jesus lived, died, and came back to life. “Because of him, we can live forever, too!” the teachers encouraged the kids.

Clouds were the theme for the day four lesson, when the youngsters heard about Jesus ascending into heaven. They found that he is actively working on their behalf as he prepares a place for his children.

The tour through time ended with the “Crown” lesson on day five, as children learned about a new heaven and a new earth where Jesus his children will live together forever.

The kids competed eagerly in teams during three special contests. On “Backwards Day,” everyone – helpers included – wore some item of clothing backwards to show that they were going back in time to learn how Jesus worked in the past. On “Christmas in July” day, kids came in festive red and green shirts and munched on colorful Christmas cookies as they celebrated Jesus’ birth. The most anticipated contest was the “Design the Time” day. Participants worked at home during the day to gather boxes, aluminum foil, buttons, pipe cleaners, and a variety of other items to fashion their own time machines. One youngster even brought a children’s rideable car decked out as a “Back to the Future” DeLorean, complete with flux capacitor. Points and prizes were earned for participating in these cool contests, bringing friends, and memorizing Bible verses.

The VBS kids teamed up on a service project in order to show God’s love to other children around the world who don’t have enough to eat. They partnered with Children’s Hunger Fund, a non-profit ministry whose mission is to deliver hope to suffering children by equipping local churches to bring boxes of food and to share the good news of Jesus’ love and care for them.

When local church volunteers bring food packs to children and their families, they also share the gospel and develop ongoing personal relationships with the people they are helping.

At VBS, the kids, volunteers, and their families collected loose change to donate. Just 25 cents provided one meal for a hungry child. The children at Christ the King Community Church came up with an initial goal of $100, which amounted to 400 meals. That was an ambitious plan for this small group, but they surpassed that easily by the second night, contributing more than $140. A second goal of $275, or 1,100 meals, was set. The kids excitedly brought their coins and bills to dump in a treasure box, and by the end of the week, they watched their donations rise to over $300, a total of about 1,200 meals.

The event culminated Friday evening with a program and ice cream social attended by about 60 people. The kids performed the songs and memory verses they had learned, watched a video of the week’s highlights, and received certificates and “thanks for coming” gifts.

Christ the King Community Church is a non-denominational church located at 971 Highway 46 across from the Gilpin County Fairgrounds. Sunday services are at 10:30 a.m. and include nursery and children’s church. See www.ctkblackhawk.com for more information.

END_OF_DOCUMENT_TOKEN_TO_BE_REPLACED

Where the dead get to tell their story By Jaclyn Schrock On Saturday, August 21, the Gilpin Historical Society held their annual Cemetery Crawl. Tickets allowed the shuttle of hundreds of guests from the Teller House parking lot to the Cemetery. Depending on v... END_OF_DOCUMENT_TOKEN_TO_BE_REPLACED

Benefitting the county, schools, and much more By Don Ireland   This year marks the 30th anniversary of casinos opening in the former little mining towns of Black Hawk, Central City and Cripple Creek, Colorado. In those early years, smoking was allowed inside ... END_OF_DOCUMENT_TOKEN_TO_BE_REPLACED