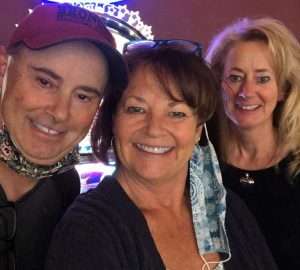 The life and times leading up to Dostal Alley

Phil and Ruth Schmalz took a risk in 1958 when they opened a rock shop along Main Street in Central City. At the time, Central City – once a booming gold mining town a century earlier – was mostly a summer tourist attraction and nothing much happened during the off-season.

At the time, the Schmalz’ didn’t realize how the move to Central City would impact their lives…nor comprehend how their descendants would help shape the future of Central City and Colorado.

Their son, Bruce, and his wife, Sandy, moved their family to the community in 1972 and opened a shop next door, selling T-shirts and other items. Bruce Schmalz, elected Central City’s mayor in the 1980s, and Black Hawk Mayor Bill Lorenz, along with others, worked tirelessly on the concept of legalizing small gaming in three former Colorado mining towns Cripple Creek, Black Hawk, and Central City. In 1990, Colorado voters approved a constitutional amendment, enabling gambling to be established. The passage meant a new life for the small community and millions of dollars in gaming taxes for the state, Gilpin and Teller County and the three gambling towns.

In the basement of the rock shop and T-shirt emporium, the Schmalz family opened a small casino and restaurant in 1991. The establishment was named for the back alley where patrons entered the building – Dostal Alley. Within a few years, the casino moved upstairs. A bar room opened and later, family members started a craft brewery. The entire business operation became known as Dostal Alley.

Bruce Schmalz passed away in 2012. His wife, Sandy, continues to live in Central City and is a well-known regular in the community.

One doesn’t have to look very far around Gilpin County to understand the concept, “give back to your community,” when it comes to the Schmalz family.

Sandy Schmalz worked with neighbors to attract tourists to Central City in the pre-gaming days. The committee organized events, including Opening Day parades and the Madame Lou Bunch Day bed races and activities.

Buddy was Central City’s mayor for six years and elected to the Gilpin County Board of Commissioners for eight. CinDee was elected to the school board. Lisa, CinDee, and Buddy have volunteered as coaches, scout leaders, school helpers, or have done other community volunteer work over the years.

CinDee remembers helping her grandparents in the rock shop when she was only 11. “We had rocks, specimens, gold nuggets, and handmade fool’s gold jewelry.” When Bruce and Sandy opened their shop next door, a hole was cut in the wall connecting the two. As gaming boomed in Central City, the bar replaced the T-shirt store and slot machines took the place of the Rock Shop.

Around 1999, Buddy persuaded his family to buy brewing equipment, so Dostal Alley could venture into the fast-growing microbrewing industry. The venture succeeded. Dostal Alley has received five medals at the Great American Beer Festival, beating other companies from across the nation. (For non-drinkers, Buddy also makes root beer and cream soda.) He has also served in the capacity of Dostal Alley’s media spokesman about brewing. The role has included TV interviews and being featured in Front Range media publications, including the Denver Post, Westward, and the Denver Business Journal.

Although Lisa, CinDee, and Buddy specialize in specific areas of Dostal Alley’s operations, they all can jump in and lend a hand, when needed. CinDee handles accounting and audit information; Lisa is the general manager and runs the daily operations; and Buddy handles the brewing – but he’s also played chef and served as the parking lot attendant at times.

Being involved in Central City and Gilpin County was a tradition passed on by the parents and grandparents. “All of us have played major roles in our community, sometimes because of our kids,” said CinDee.

Buddy noted some locals consider Dostal Alley as the heart of the community. One reason is they have known many of their customers and fellow residents for such a long time. “It’d be a cliché to say we know our customers – but we really do. Sometimes, we know more than we’d like to do,” he said, chuckling. “The difference is we’ve been here a long time, 49 years. When we all leave for the day, most of us can walk home. We’ve been involved in just about every part of Central City. It’s kind of like we’re the soul of the community, not just a business in the middle of it.”

The newly-completed revamp of Dostal Alley had been in the planning for roughly four years. There were, as one might expect, different viewpoints among the siblings. However, as Buddy emphasized, “We all get along incredibly well. When we have differences, we aren’t afraid to discuss them. Maybe that explains why this business has lasted for so long.”

Steve Boulter, Lisa’s husband, also plays a part of the family business. He tends bar, plays slot attendant, and fills other roles as needed. “Family businesses are typically notoriously difficult to work for,” said Steve. “However, this family works well together. Lisa, CinDee, and Buddy are very dedicated to what they do. I’ve been working with my wife here for 13 years. I’ve been married to Lisa for 27 years. It’s been blissful for me. However, you’d have to ask Lisa for her opinion on that,” he said, smiling.

END_OF_DOCUMENT_TOKEN_TO_BE_REPLACED

Where the dead get to tell their story By Jaclyn Schrock On Saturday, August 21, the Gilpin Historical Society held their annual Cemetery Crawl. Tickets allowed the shuttle of hundreds of guests from the Teller House parking lot to the Cemetery. Depending on v... END_OF_DOCUMENT_TOKEN_TO_BE_REPLACED