It was totality awesome! 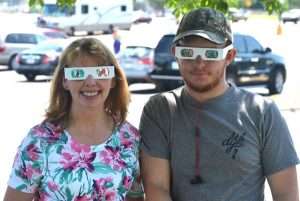 As everyone knows, unless they were camping under a rock for the past several weeks, this past Monday, August 21, our nation experienced its first coast-to-coast total solar eclipse since 1918. Dedicated eclipse chasers had efficiently reserved motels and viewing spots months if not years in advance along the path of totality. My family and I found ourselves in North Platte, Nebraska on Monday at 12:54 pm Central Standard Time, gazing with awe at the nearly once-in-a-lifetime phenomenon.

I say “found ourselves” there, because traveling to Nebraska to see the eclipse was not actually our intention. We were focused instead on a special family event – my husband’s parents celebrated their 65th wedding anniversary last weekend. All the friends and relatives converged on Mountain Lake, Minnesota to wish my in-laws well on that rare and wonderful occasion.

My husband had to return to work on Tuesday following the celebration, so we had decided a couple of months ago to drive back from Minnesota via Nebraska on Monday, August 21. At first, we didn’t realize that date was E-Day.

Finally, though, it hit us.

“What day did you say we’re driving back on?” I asked my husband.

Yikes. We leaped into action and made motel reservations in Columbus, Nebraska, for the night before the eclipse (which took some doing as most of the motels were already booked by those smugly efficient eclipse chasers). We wanted to see the eclipse, too, so we planned a stopping place from which to view it and found that the path of totality would obligingly follow I-80 over North Platte.

I dusted off my box of dual aluminized mylar eclipse glasses, purchased three years earlier for a partial eclipse. We were ready!

It was somewhat daunting to hear the media traffic predictions. “By our best estimate, Nebraska is the closest destination for 33 million Americans, and we further estimate actual visitation on eclipse day at between 117,000 and 466,000 people,” one eclipse site cheerfully announced. We decided to purchase some extra food and beverages and prepare to hunker down for many extra hours on the road.

The reality was somewhat different. We got up early Monday morning at our Columbus motel.  The traffic was indeed heavier than usual to Grand Island, where hundreds of cars had lined up for a viewing event near the Stuhr Museum. However, we rolled past them in the other direction and stopped at Bosselman’s Truck Stop to load up on supplies and gas and visit the all-important restrooms. Then we were off again. Weather was in the 80’s, skies were blue with a few high wispy clouds, and traffic hummed along smoothly.

Traffic advisory signs adjured us, “Turn on headlights for eclipse.”

“So turning on our headlights is what starts the eclipse,” my husband mused. “What if I turn off the headlights in the middle of it?”

I ignored his witticism and switched on the radio to a local station to get traffic updates. A black light tailgate party in beautiful downtown Cozad was being advertised. It was the first time in our married life that we had a potential reason to visit Cozad, but we resisted and stayed on course. A country tune came on next. Blake Shelton was belting out the lyrics to “Boys ‘Round Here.”

“Do you think we could somehow work that into a worship song at church?” my husband queried.

I sighed patiently. “Not listening to you.”

Neither was our teenage son. He lounged in the back seat, ear buds in and focused on his mobile device, oblivious to his parents reading road signs for entertainment.

Finally, we pulled into North Platte at 11:15 am. We had decided in advance to try parking at Walmart. It turned out to be a good choice, as there were only about a hundred cars in the lot. We joined several others relaxing on the grass under some lovely shade trees to await the Big Moment. Folks tried on their eclipse glasses and welding masks, adjusted their cameras and cell phones, munched sandwiches, and chatted.

The eclipse started at about 11:45 am CST. Observers murmured remarks with low-key reverence.

“Look at the crescent shape.”

“Yes, and the temperature is definitely cooler.”

Finally, the moon passed completely in front of the sun and seemed to stop, revealing the breathtaking “diamond ring” aura. Witnesses were filled with admiration and broke into applause.

The compelling effect lasted only a couple of minutes. The moon began to slide on its course again. Streetlights blinked off, people packed up their gear, and cars began pulling out of the parking lot. It was time to head home.

Our trip east was relatively easy, with 75 mph speeds the norm and few delays until Highway 85 joined with I-76 at Brighton. Then it jammed for about 20 minutes until things got flowing again.

On the way, we discussed some fun facts. Everyone in the continental U.S. saw at least a partial eclipse, weather permitting, but the corridor of totality was only about 70 miles wide. The eclipse covered its swath over Nebraska at more than 1,700 mph. The next total solar eclipse over the continental U.S. will be on April 8, 2024.

A few not-so-fun-facts. Although our family had it easy coming back from Nebraska, folks returning from Wyoming did not. It took nine hours to get from Casper to Cheyenne. Some gas stations in Cheyenne even ran dry. One backup at the border stretched more than 25 miles. CDOT said about 5,000 cars per hour traveled from Wyoming back to Colorado – 18,000 cars more than usual.

Was all the fuss worth it? Well, it got people looking up for once. I turned to the poetry in Psalm 19 in the Bible, which expressed what I was feeling.

“The heavens declare the glory of God; the skies proclaim the work of his hands… in the heavens he has pitched a tent for the sun.”

It was well worth coming out from under that rock.

END_OF_DOCUMENT_TOKEN_TO_BE_REPLACED

Benefitting the county, schools, and much more By Don Ireland   This year marks the 30th anniversary of casinos opening in the former little mining towns of Black Hawk, Central City and Cripple Creek, Colorado. In those early years, smoking was allowed inside ... END_OF_DOCUMENT_TOKEN_TO_BE_REPLACED