Is Pixels worth your time and price of admission? 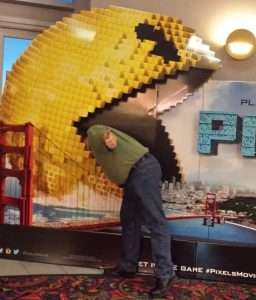 Happy Madison Productions, along with Columbia Pictures and 1492 Pictures, produced an 80s nostalgic movie, Pixels; casting several big name stars like Adam Sandler, Kevin James, Peter Dinklage, and Sean Bean (uh-oh, you know what that means, don’t you?). The movie was directed by Chris Columbus who is responsible for bringing Harry Potter to life on the big screen and has directed other gems such as The Goonies, Home Alone, and Night at the Museum. With all this talent behind it, Pixels stacks up with potential to be a great film for family entertainment. Early critic reviews have absolutely trashed this movie as if they had a vested interest in seeing it fail. So is it as bad as they critics say, or is there something worth watching?

Pixels tells the story of an arcade video game almost-champion of the 1980s using those same skills to help save the planet from an alien invasion. A time capsule was shot into space in 1982 which contained multiple recordings of earth culture including footage of a video game championship featuring many of the stand-up arcade games of old. The capsule was found by an intelligent alien culture that of course interpreted the capsule as a declaration of war. Now the aliens are attacking earth in three-dimensional recreations of video game antagonists such as Galaga, Arkanoid, and Centipede. It is up to Brenner, played by Adam Sandler (Grown Ups, Blended, Hotel Transylvania), and his crew consisting of his best friend and now president of the United States, Cooper, played by Kevin James (Paul Blart Mall Cop, Here Comes the Boom, Hitch), his boyhood friend turned conspiracy theorist Ludlow, played by Josh Gad (Frozen, The Wedding Ringer, The Comedians), the arcade video game champion and his nemesis turned felon, Plant, played by Peter Dinklage (Game of Thrones, X-Men: Day of Future Past, The Station Agent), and his client and recently divorced love interest, Violet, played by Michelle Monaghan (True Detective, Mission: Impossible III, The Bourne Supremacy) to save the day with their mad video game skills.

For those of a certain age group, the movie delivers on nostalgia. You get to see three-dimensional renderings of favorite video game characters attacking buildings and people by pixelating them into thousands of cubes. One scene recreates an entire Centipede game screen complete with mushrooms and dancing spiders. Another uses the streets of Manhattan as a giant Pac-Man maze. The aliens communicate with the people of earth by disrupting their television transmissions, replacing them with their own messages. These messages are vocalized by folks from the eighties; Ronald Reagan, Madonna, Hall & Oates, and even Max Headroom. To capitalize on the nostalgia of how “better” things were back then, they joke about how it took brains to identify and memorize patterns for the old arcade games versus today’s popular selections which are more reactionary than strategy. That theory is later turned on its head as the aliens stop attacking with familiar patterns, but with more randomness.

The movie is led by Adam Sandler. Sandler is known for portraying an immature, never developed past middle-school, adult spouting crass and allegedly humorous (by middle-school standards) comments throughout his films. His last serious role is arguably 50 First Dates back in 2004. Sandler brings to Pixels some of that crass immaturity, but it is toned down for this one. His signature animals in heat are nowhere to be found. He still plays an adult in arrested development that gains respect and hopefully maturity, not to mention the girl, by the end of the film.

Pixels is a comedy that knows it is only a comedy. The screen-writers did not make a serious movie with comedic elements, an action films with funny one-liners, or add any true depth to it at all. Chris Columbus did a good job with the script he was handed, but there is a lack of intelligent dialogue or mental candy of any kind. The redemption of Brenner into manhood is pretty shallow. Kevin James, when he gets serious, can be a great dramatic actor, but instead POTUS is just another formulation of the King of Queens creating doubt on the realism of his character, Cooper, ever being elected. Truth be told, this movie could indeed be picked apart rather harshly if that’s your goal. In fact, you could lose yourself imagining all the ways this movie could be redone in a better way to achieve more realism, better action, more depth, more whatever. However, if you just want some mindless entertainment with a few laughs along the way, Pixels can and does deliver.

The movie is rated PG-13 for some language and suggestive comments. There are few true deaths and even the humans who were pixelated are shown later to survive the process having been beamed aboard the mother ship in true Galaga fashion. There is no sex although there is a suggestive scene between Peter Dinklage, Serena Williams, and Martha Stewart. The movie gets bonus points for its use of Q-Bert, but definitely loses points for not using, or obtaining the rights to, the actual music and sound effects from most of the arcade games shown. I rate this movie a very solid three out of five extra lives.

END_OF_DOCUMENT_TOKEN_TO_BE_REPLACED

Benefitting the county, schools, and much more By Don Ireland   This year marks the 30th anniversary of casinos opening in the former little mining towns of Black Hawk, Central City and Cripple Creek, Colorado. In those early years, smoking was allowed inside ... END_OF_DOCUMENT_TOKEN_TO_BE_REPLACED

Benefitting the county, schools, and much more By Don Ireland   This year marks the 30th anniversary of casinos opening in the former little mining towns of Black Hawk, Central City and Cripple Creek, Colorado. In those early years, smoking was allowed inside ... END_OF_DOCUMENT_TOKEN_TO_BE_REPLACED