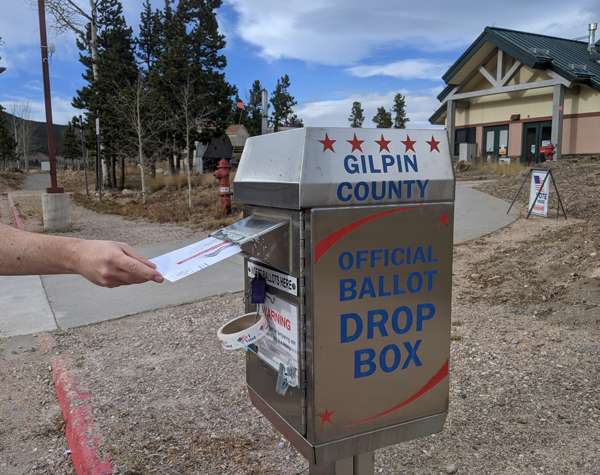 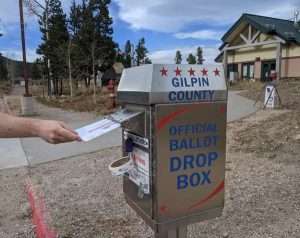 Yes! Four ways to submit your ballot in Gilpin County

“Mail-in ballots are dangerous, unconstitutional, a scam, and “rife with fraud. Absentee ballots are more secure than mail-in ballots. Votes are being cast on behalf of dead people and pets. Mail-in ballots will lead to a ‘rigged’ election.”  Wow. With statements like these it is no wonder many people are feeling anxiety over whether their mail-in ballot is safe and if their vote will be counted. Colorado has been a mail-in ballot state since 2013 and has had all that time to perfect the process. I had a conversation with our County Clerk and Recorder, Sahari McCormick on this issue, and while she cannot speak to the specifics of what other counties or states are doing, she did enlighten me on Gilpin County’s ballot process.

Voters have four choices with the mail-in ballot system; (1) they can mail their completed ballot to their local Clerk and Recorder’s office using the return envelope provided with the ballot; (2) they can drop their completed ballot into an official drop box; (3) they can bring their completed ballot to a polling place on election day (November 3rd); or (4) they can skip the ballot altogether and vote in person at their polling place. Clerk and Recorder McCormick encourages people to not wait until November 3rd, but to vote early for three reasons. The first is that voting early allows time for things to be remedied if your ballot is not received. The second is that voting early helps the elections workers to process things efficiently so more ballots can be counted prior to the 7 pm deadline on election day. Third, is that when your ballot is registered as being received, the political phone calls will stop. That’s right, no more robo-calls!

Voting early sounds like a great idea, so the question remains, how safe is it? The journey starts at a drop box; from there, ballots are taken to a locked and secure transfer case, and when that is full, it is taken to the Court House and locked in a secure room not to be touched again until election day. Gilpin County has three official drop boxes; one at the Public Works building in Rollinsville (135 Tolland Road); one at the Community Center (250 Norton Drive); and one at the Court House in Central City (203 Eureka Street).

Did you know that you can use any official drop box in the state of Colorado to drop off your Gilpin County ballot? Those ballots are transferred to Gilpin County as soon as possible after election night, which is one reason there are no “official” results that night.

The official drop boxes are locked and secure. Each box holds about 300 ballots and at the rate of this year’s returns, they will fill quickly. Sahari’s team empties each box once a day Monday through Saturday through November 2nd. McCormick said they will monitor the boxes and schedule an additional pickup on Sunday the 1st if necessary. On Election Day, they will pick up ballots from each box four times and then they will be sealed at 7 pm (no ballots will be accepted after that time). The Clerk confided in me that they have cameras surveilling every step ensuring there is no tampering. Every time the ballots are transferred, they are handled by no less than two election judges with at least one judge from each major political party. If they feel the need, the Gilpin Sheriff will supply an escort for extra security and safety. The Clerk and Recorder is not taking any part of the process for granted. She receives reports from the FBI and the Secretary of State of any possible tampering or threats and has had the FBI check security for the County Clerk’s Facebook and Twitter pages.

This election is emotionally charged, and voter turnout is expected to be high. Gilpin County’s unofficially final totals are not anticipated until after 11 pm on November 3rd and they are reported directly to the Secretary of State where the County results will be posted. Nine days later, November 12th, is the deadline to receive all remaining ballots; those mailed to or dropped off in other counties and those from overseas and a final count is made on November 13th. Those results are certified as final (after an audit is completed in every county) by November 21st, although that can be pushed back if multiple audits are conducted. Therefore, if you are sitting on pins and needles waiting for Gilpin’s results on election night, you might have to make yourself comfortable, find your inner peace, and practice a great deal of patience until the end of November.

For your information, every one of the quotes at the beginning of this story are false. Absentee ballots and mail-in ballots are handled in the same manner and one is not more secure over another. As for ballots being received by dead people, there are a certain number of people who unfortunately do pass away after they send in their ballot and those numbers are tracked. In Michigan, there were 846 who died after mailing in their ballot in the 2014 election. Adding to the confusion, a non-profit group in Virginia sent out ballot applications (not actual ballots) addressed to people who had died, and in some cases made out to a pet. Mail-in ballots do not rig an election by tilting in favor of one party over another. Numerous studies of sixteen states that use mail-in balloting show no significant difference in ballots returned by one party over another compared to prior years. Do people try to use an “extra” ballot made out to their former roommate, deceased family member, or pet to fraudulently cast an extra vote? Some unfortunately do. Therefore the Clerk and Recorder gets information about deceased individuals and her bi-partisan team compares signatures to what is on file. Voter fraud, such as signing someone else’s ballot, carries a penalty between $500 to $750,000 and prison time from six months to twelve years. Is one extra vote worth twelve years of your life? 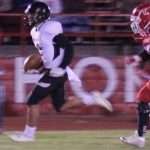 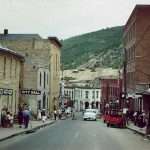