Is Avengers: Age of Ultron too much to handle? 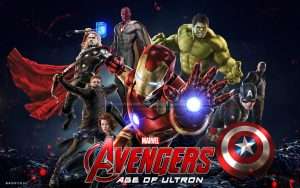 In case you missed it, The Avengers sequel has been released and has broken ticket records across the globe. I am not sure ‘sequel’ is the right word to categorize this movie other than it does occur in a specific timeframe within the Marvel universe. The Marvel movies have been slowly building a storyverse filled with characters on the epic scale of Lord of the Rings and as broad in scope as Star Trek or Stargate SG-1. The latest installment, Age of Ultron, takes place shortly after the events in Captain America: The Winter Soldier showing the Cap in charge of the remnants of SHIELD.

The movie opens with the familiar crew; Captain America played by Chris Evans (Before We Go, Snowpiercer, The Iceman), Hawkeye played by Jeremy Renner (American Hustle, The Immigrant, The Bourne Legacy), Black Widow played by pregnant Scarlett Johansson (Lucy, Chef, Her), Iron Man played by Robert Downy Jr. (Sherlock Holmes, Chef, The Judge), Hulk played by Mark Ruffalo (Foxcatcher, Infinitely Polar Bear, Now You See Me), and Thor played by Chris Hemsworth (Blackhat, Rush, Star Trek Into Darkness), in the middle of an operation to retrieve Loki’s staff, originally lost in Thor: The Dark World and then seen again in Captain America: The Winter Soldier. The fortress which they are trying to break in sits in fictional Sokovia located somewhere in Eastern Europe. Inside the fortress are two mutants… wait, that’s 20th Century Fox’s name for them, two metahuman twins Pietro and Wanda Maximoff played by Aaron Taylor-Johnson (Godzilla, Kick-Ass, Anna Karenina) and Elizabeth Olsen (Godzilla, Oldboy, In Secret) respectively. Pietro is a super-sonic speedster nicknamed Quicksilver and Wanda is a mystically powered human nicknamed Scarlet Witch. Interestingly, I don’t recall their nicknames being used once in the film, but the Marvel Comic fanboys and girls are so familiar with these characters, it doesn’t matter. For those who do not read the comics, their nicknames do not matter. The wonder twins were genetically altered using Loki’s staff which is why the Avengers are reigning down their pain on Baron Wolfgang von Strucker, played by Thomas Kretschmann (United Passions, Plastic, Dracula), the alleged last Hydra agent. This neatly ties up the Winter Soldier plot; at least until another Hydra agent rears its evil head. Suffice it to say, the Avengers succeed in reclaiming the staff and losing the Maximoff twins, but at the cost of their ability to work together. Scarlet Witch has the ability to make humans hallucinate their fears and Wanda mixes her brew viciously well among the heroes. This leads to a scene that many comic book fans have been salivating for; a battle between the Hulk and Tony Stark in the “hulk-buster” suit. The “hulk-buster” suit has been hidden in a space satellite ready to dispatch and Tony’s command which Stark refers to as Veronica. This is an inside joke for Archie comic book fans. One of Bruce Banner’s popular love interests is Betty Ross, so director Joss Whedon (Dollhouse, Firefly, Parenthood) used Veronica as the antithesis of Betty as the characters were in the Archie comics.

That was a lot of story before Ultron even appears. With Loki’s staff in Tony Stark’s temporary possession, Stark and Banner study it to discover the secret to making true artificial intelligence (AI). Tony is obsessed with creating a machine that will protect earth from future invaders. The ultimate defense system is named Ultron by Tony and Bruce. Allowing the design program to run, the two scientists leave for a party. The running program finds the successful matrix to create AI in their absence and Ultron, played by James Spader (The Office, The Practice, Stargate) is born with a misplaced set of morals based on off-hand comments Stark had previously made. Ultron ultimately decides that for true peace on earth, mankind must be destroyed to start over beginning with the Avengers themselves. Thus begins a battle of might, wits, time, and strength to undo the evil that is Ultron. Ultron, in his quest to “evolve” the human race, creates AI of his own to evolve himself. This ultimate Ultron requires some extra energy to power it and what better tool than the stone inside Loki’s staff which turns out to be (not surprisingly) the mind stone, one of the six Infinity Stones referenced in Guardians of the Galaxy. The new creation Ultron calls his vision, and thus the ultra-Ultron names himself Vision. Unbeknownst to Ultron, Tony downloaded his JARVIS program into the humanoid prior to him being “born.”

As you can tell, there is quite a bit going on for a 141 minute movie, and that’s not the half of it. Whedon introduces yet another Marvel Character which gets its own movie in 2018, The Black Panther along with supervillain Ulysses Klaw played by Andy Serkis (Dawn of the Planet of the Apes, The Hobbit movies, The Lord of the Rings movies). Unbelievably, The Black Panther movie will not come out until after the Avengers storyline (almost) wraps up in The Infinity War Part 1 the same year. Joss Whedon packed so many characters into this movie, he felt that juggling them all was “a nightmare” and has decided not to tackle The Infinity War story. I believe the movie is worse for it as well. Although Whedon used several tricks to make this feel different from other Marvel movies, it still felt familiar and regurgitated. It had a feel of the Expendables movies where the characters all had some great one-liners, but not much depth. Whedon treated these characters as people the audience already knows, although there a couple of great exceptions. He gives us some back-story and depth for two characters; Black Widow and Hawkeye which was a stark contrast to the rest of the movie. These two characters are not in their own movies (at least, not yet) and there are no plans for them, so it was a good thing Joss did to flesh them out a little.

For Joss Whedon, this movie was almost too much to handle and as a stand-alone movie, audiences will be confused, but entertained. However, for anyone who loved the first movie (and literally millions of people saw the movie in theaters), Age of Ultron will be great. From Captain America’s casual cautionary “language!” to Stan Lee’s catch phrase “Excelsior,” fans will be cheering. The movie is very much a comic book movie which to me means it is full of fantastical physics breaking and logic ignoring scenes of action and dialogue. The death toll for this movie is great and most of which is ancillary so if you don’t think about it, it won’t matter. In fact, other than Bruce Banner, it doesn’t seem to matter to the Avengers either. This fact bothers me. I want superheroes to care about their collateral damage, but the topic seldom comes up. For the Avengers, much of the damage is of their own making in this film so the loss of civilian lives should mean more. Honestly, for Banner, it breaks him and creates a moving scene between Bruce and Natasha, but the feeling doesn’t seem to resonate among the rest of the crew. If anyone should be bothered by it, Steve Rogers would be crippled by the knowledge that their actions unintentionally snuffed the lives of innocent bystanders.

This movie set the stage for several other stories to be told, but for me, did not have the same fun-filled wonderment of the first Avengers movie. Even fans of the Avengers comics and cartoons will be left with a sense of disappointment at the drop of the curtain on the word, “Avengers…” Yep, the familiar and loved phrase is never completed. Bummer. There are many things to nit-pick about this movie; however, I will rate it higher because after all, I am a fan. I rate this movie four and a half out of five Veronica replacement parts.

END_OF_DOCUMENT_TOKEN_TO_BE_REPLACED

Benefitting the county, schools, and much more By Don Ireland   This year marks the 30th anniversary of casinos opening in the former little mining towns of Black Hawk, Central City and Cripple Creek, Colorado. In those early years, smoking was allowed inside ... END_OF_DOCUMENT_TOKEN_TO_BE_REPLACED

Where the dead get to tell their story By Jaclyn Schrock On Saturday, August 21, the Gilpin Historical Society held their annual Cemetery Crawl. Tickets allowed the shuttle of hundreds of guests from the Teller House parking lot to the Cemetery. Depending on v... END_OF_DOCUMENT_TOKEN_TO_BE_REPLACED