Invasion of the Miller Moths! 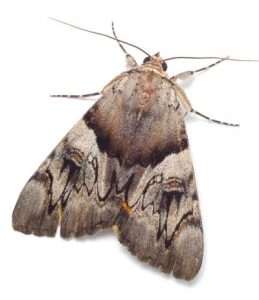 From army cutworms to flying up the mountains in Colorado

The first army cutworms I saw this year were falling from masses of caterpillar web nests high in the cottonwood trees along the San Pedro River in Arizona, mid-April, very normal. There were tons of caterpillars everywhere. About 2 inches long, light grey with a brilliant blue strip front to back on both sides.

The second time I encountered the army cutworms this year, they had metamorphosized into the miller moths, resting for the day inside our camper, early June back in Gilpin County, also very normal. I was happy to see them, since they had not been around much the last few years.

I am learning, not all caterpillars with blue dots on their sides are alike.

On the first experience, we walked through a mesquite forest as we left the Arizona State Park parking area, past the old schoolhouse, post office and houses remaining from the former centralized mill town of Fairbank, Arizona.

The town was founded in the mining days, by a flowing river, where the steam train brought in the various rocks from other mining camps to be milled, including Tombstone in 1881.

As we walked a quarter mile toward the San Pedro River, our path was frequently interrupted by caterpillars crawling along. We were in arid Arizona, walking toward the only source of year-round running water for over 50 miles. The nearest river to the San Pedro is the Santa Cruz which had supported agriculture for over 4,000 years where Tucson was developed, until the underground water was pumped out, it now is a dry riverbed. The San Pedro continues as a riparian oasis where many flora and fauna species are found flourishing.

This river flows north from Mexico into the Gila River, which for the last 100 years is usually a dry riverbed. A little over 20 miles downstream water is no longer visible above ground, but can be found when digging down in in the San Pedro riverbed about a foot or more. An impermeable caliche layer of natural cement keeps the water from sinking deeper along its trail.

At the river the number of army cutworms increased dramatically. Most fell from communal webbed nests the caterpillars built on a majority of branches of the tall cottonwood trees lining the river. The water was only 5-8 inches deep, and had some long strands of moss floating with a few wiggling caterpillars. Most appeared to be dead, moving north with the water. Some made their way to shore to continue crawling. How they landed on the sandy ground without perishing amazed us, to see them still crawling toward any broad leaf or grass they could eat.

In early spring, caterpillars build webbed nests for safety from predators, like birds and beetles. Each nest appears to hold hundreds of caterpillars. They often strip the newly emerged leaves off the branches, around their nest.

I have not heard about the army cutworm moths migrating in Arizona the way our “miller moths” do in Colorado. There are 9,000 foot peaks in the Huachuca (wa-chew’-ca) Mountains among the Sky Islands of AZ within 30 miles of Fairbank, AZ. So they may migrate to cooler elevations in AZ as they do in Colorado.

For millennia, Colorado has been known to have miller moths make spring time migrations from the lower elevations of Oklahoma, Wyoming, Kansas and Nebraska up the Front Range to gather pollen from flowers in cooler high elevations of the Rocky Mountains. Coloradans are seeing many moths this spring that get trapped in buildings and vehicles. They normally migrate at night, and hide out in the day. In the fall when they return to lay eggs in weeds of lower elevations, fewer moths have survived to make the trip so are not as noticeable.

Miller moths are one of Colorado’s normal spring events. Some people hate them, but most accept it as part of living in Colorado. In heavy years like 1991, they are a nuisance to everyone.

We have more moths this summer than in the last few years. We have forgotten about them as they had such few numbers in the last couple seasons. But most experts say there is just an average amount of moths this year.

We are seeing more of them earlier in the season as a dry spring with a late freeze has reduced the miller moths normal supply of nectar from flower blossoms in the plains. Weather has drawn the caterpillars to mature into moths sooner. Normally over a 3-6 week period they migrate to escape warm summer nights to the higher, cooler elevations in search of a summer of blossoms, slightly earlier than normal. They rest in the day, and eat nectar and migrate at night.

The army cutworm and adult moth is common in the western prairies in the US. It is wide spread in western North America. Midwest farmers must use insecticides to keep their tender sprouts from being destroyed. The more eastern army cutworms may migrate to southern states to avoid freezes in the north.

In Colorado, we call the army cutworm moth “miller moths.” Jingling keys, ringing bells, or frequencies like bats use startle the moth to excitedly flutter erratically. They are also attracted to lights we use at night. When they bump into things trying to escape a suspected predator they drop wing scales. The dusty residue is similar to the grain miller’s dusty clothes. Hence the name, miller moths.

END_OF_DOCUMENT_TOKEN_TO_BE_REPLACED

Benefitting the county, schools, and much more By Don Ireland   This year marks the 30th anniversary of casinos opening in the former little mining towns of Black Hawk, Central City and Cripple Creek, Colorado. In those early years, smoking was allowed inside ... END_OF_DOCUMENT_TOKEN_TO_BE_REPLACED