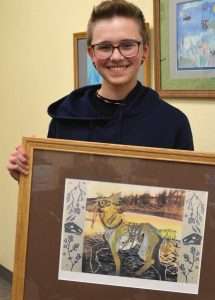 The Gilpin County Board of Education held its regular meeting on Tuesday, May 15, at 7:00 p.m.Craig Holmes, Brook Ramsey, Kersten Armstrong, and Steve Boulter were present; Sarah Swanson was absent. Superintendent David MacKenzie, Secondary Principal Alexis Donaldson, Elementary Principal Heather Huntoon, and Secretary to the Board Joni Schmidt were present.

The Board recognized two student artists. Elementary artist was first grader Quinn Sill, whose work was a collage based on animals.

High school sophomore Jake Marshall was honored for his digital artwork. Jake’s was one of three prints sold at the “Extra Credit” high school art show at the Central City Visitor Center this past winter.

Superintendent MacKenzie thanked Halsted for getting all of the artwork ready for the Board meetings all year and congratulated him for all his work with the students.

Last week was Teacher Appreciation Week. The entire staff, as well as all teachers, had been thanked with gifts. MacKenzie thanked the Board for their guidance and leadership and presented the members with mugs filled with candy.

The Alan Green Memorial Foundation donated $5,000 toward the new track and field construction.

Four teachers are retiring at the end of this school year: secondary teacher Ralph Campbell and elementary teachers Joyce Campbell, Sharon Lutes, and Anne Lloyd Taylor. The principals stated that these teachers will be missed.

The high school graduation is this Saturday, May 19, preceded by a scholarship awards program and capping ceremony on Wednesday evening, May 16. Secondary Principal Donaldson thanked the community for supporting the graduates.

Senior Jack Ball will participate in the state track tournament this week.

Senior Austin Boulter will represent Gilpin in the A-1 All-State football game on June 1. He was voted on by the league coaches. The game will be held at the University of Northern Colorado in Greeley.

Elementary Principal Huntoon presented a video prepared by fourth grade teacher Susan Sepanik and her science students. Sepanik and her class were at their outdoor ed trip to 100 Elk in Buena Vista and could not attend the meeting.

The students demonstrated their projects for the STEM Fair (Science, Technology, Engineering, and Math) this month. They used the engineering design process to create inventions that would solve real world problems. Some of the projects were a guinea pig interacter, a device that spread butter on bread efficiently, a button to provide entry into a safety room to protect students from intruders, and a “safe” safe to protect your stuff from being stolen by younger brothers.

The students explained their problems, procedures, materials used, research and development, and results.

The Board approved all consent items as submitted: Business Manager’s report, check vouchers, financial statement for April, and the human resources report.

Board members were to join the senior class at a breakfast at 8:00 a.m. on Thursday, May 17, in the atrium.

The Board resolved that it “assures that it is in compliance with the ‘supplement,’ not ‘supplant’ provisions within … the Every Student Succeeds Act.” MacKenzie clarified that the Every Student Succeeds Act replaced the No Child Left Behind Act. Gilpin’s Board will supplement what the District is already doing for the students, but will not supplant, or replace, resources for the students in order to receive government funds.

As part of MacKenzie’s ongoing update of the District policy manual, several policies were repealed at the May 15 meeting.

Holmes questioned repeal of policies regarding advertising in the school district. “There is going to be an opportunity to advertise on the new field,” he said. “We should have a policy on advertising. I hate to give the Booster Club free rein on designing that.”

MacKenzie responded, “We don’t have a set policy. I will do research on other districts’ advertising.”

The repealed policies no longer appear in the CASB (Colorado Association of School Boards) master list for recommended policies. Either they do not rise to the level of Board policy and are better suited for a handbook, or their content has been updated and absorbed into another policy.

The middle and high school baseball and track teams are wrapping up their seasons.

Donaldson thanked the Booster Club for the many hours they put in through this final month of school, including the breakfast they provided during staff appreciation week.

Drama, music, and art students were recognized at the fine arts banquet on the 14th.

Donaldson congratulated the students, art teacher Halsted, and music teacher Randi Ebers for an exceptional spring arts extravaganza on May 9.

Secondary academic awards will be held Wednesday, May 23. Booster Club will provide dinner.

The week of May 7 was staff appreciation week. Staff received a number of treats provided by the PTA. A parent also provided coffee.

The Race to Read program went well, due to the hard work of teacher Kathy Kelly. Monica Ruhl’s class won, and Ruhl raced a car at Bandimere as the prize.

The STEM fair went well this month, but the fair will be held in the fall next school year.

Fifth graders will release the trout they raised on May 29 at William C. Russell Park in Central City; that is, if the whirling disease results they receive on May 16 are negative. It was necessary to test the fish for that disease prior to their release.

Elementary teacher Beth Olkowski is resigning at the end of the school year.

Hellas Construction is putting in the interior curbing for the new track; MacKenzie will meet with Hellas on May 29.

Lights are expected to arrive in a week or two. Work is progressing on getting power out to the field area.

A move to better distribute funds based on district needs was tabled in Colorado’s legislature this session.

“There was not enough money now. If it had passed in the legislature, it would have meant $1.5 million in additional funding and negated the negative factor,” MacKenzie said. There are plans to bring it back next session.

MacKenzie brought up citizens’ Initiative 93 to amend the state constitution to redistribute taxes toward education. Initiative 93 is a ballot issue supported by 178 Colorado public school district superintendents. The initiative proposes changing the state’s existing school funding formula. If this ballot issue were to pass, MacKenzie noted, it could provide approximately $1.6 billion more in revenue earmarked for funding education. There is an effort to get this issue on the ballot in November.

“That’s a big undertaking. Preliminary talk is that there will be no tax increase for the majority of taxpayers, but there may be for those earning more than $150,000 and for corporations. If it passes, there would be money for the legislation.”

He provided the Board with copies of language approved for an initiative for the November ballot. The Board may choose to support, not support, or be neutral when it gets more information.

MacKenzie noted some PERA retirement fund changes. On July 1, 2019, employers will have a contribution increase of 25 percent, and employees’ contributions will increase 2 percent over three years. The state has committed to budget $225 million per year of its general fund to PERA over 30 years. The retirement age will be raised to 64 for new employees, and the highest average salary will be raised to five years. A 1.5 percent cost-of-living increase will be given to retirees.

MacKenzie will meet with United Power on Friday, May 18, regarding putting a generator in the building.

A $20,000 (70 percent) match has been received from E-rate to update the District’s Internet switches and upgrade its uninterruptible power supply.

MacKenzie said the telephone system had to be rebooted twice on May 15. He hoped the system would last until the end of the school year, when an upgrade to a Voice over Internet Protocol system would be installed.

The Board adjourned the regular meeting at 8:00 p.m. to go into an executive session regarding personnel.

END_OF_DOCUMENT_TOKEN_TO_BE_REPLACED

Benefitting the county, schools, and much more By Don Ireland   This year marks the 30th anniversary of casinos opening in the former little mining towns of Black Hawk, Central City and Cripple Creek, Colorado. In those early years, smoking was allowed inside ... END_OF_DOCUMENT_TOKEN_TO_BE_REPLACED

Where the dead get to tell their story By Jaclyn Schrock On Saturday, August 21, the Gilpin Historical Society held their annual Cemetery Crawl. Tickets allowed the shuttle of hundreds of guests from the Teller House parking lot to the Cemetery. Depending on v... END_OF_DOCUMENT_TOKEN_TO_BE_REPLACED