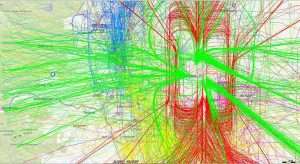 The Work Session agenda received public comment to complete drafting revisions of the BoCC letter to the Federal Aviation Administration’s (FAA) NextGEN efficiency proposal, locally known as Denver Metroplex Drafted Environmental Assessment. See this letter in the Letters to the Editor of this week’s Weekly Register-Call.

BoCC’s letter to the FAA Administrator requests a reopening of discussion regarding environmental assessments for the western air travel into and out of Denver International Airport (DIA). Few areas in Colorado recognized the need to voice concerns for this proposal during the public concerns period. Its impact to increase air traffic in specific areas was not made clear with the inadequate communication efforts by FAA. Other Metroplex communities have also struggled to be informed of changes implemented without respectful communication or to allow community feedback.

June 6, 2019 was the official closing of public input on air traffic changes proposed by FAA’s Denver Metroplex plan. A public information meeting was held in Boulder where the last four years of increased air traffic congregated over Boulder County was recognized as offensive.

NextGEN is FAA’s nationwide plan with satellite guidance systems are intended to be more efficient with fuel consumption, improved safety, and improved on-time flights of military, commercial, and private air traffic. The efficiencies seem to be proposed in Denver by condensing air traffic routes so that specific areas get the most traffic, and allowing the acceleration noise to be above the mountains to occur in our national forests and residential areas.

Twelve Metroplex sites have been designated by the FAA in the US to facilitate these efficiencies to annually reduce fuel used (measured by million gallons), cost (saved by million dollars), and (metric tons of carbon reduced). Seven Metroplex plans have been completed. Phoenix’s Metroplex plan has been cancelled. Cleveland/ Detroit is currently being implemented. With Denver, Florida, and Las Vegas lagging behind in the design phase. (www.FAA.gov)

Interestingly, Denver and Northern California ranked the lowest on the reduction of Metroplex’s anticipated savings of fuel used, cost saved, and carbon reduced.  Florida and Charlotte ranked the highest for saving with the Metroplex plans.

By June of 2019, at least two California communities – Culver City and Palo Alto, are protesting and considering lawsuits against the FAA for not requesting public input regarding Environmental Assessment before implementing changes in flight plans, which impacted noise and air quality to communities.  Hollywood/ Burbank (BUR) has pending concerns raised against the FAA. Baltimore is legally fighting with the results still pending. Phoenix won the battle to refuse Metroplex. (www.FAA.gov)

Other Colorado areas were not notified of the opportunity to voice concerns to the unknown proposals that threaten their community’s noise levels, planned to be elevated with the Denver Metroplex plan by 2020/2021.  Gilpin County is only one of four major routes proposed to experience similar volumes of air traffic Boulder is currently complaining about with the Metroplex plan.

Since 2013 flight paths have been funneling into tighter areas. Most previous airplanes did not take the same path, so were more dispersed along the Front Range. In 2013 those paths needing to travel over the mountains changed to be more confined routes, some over Boulder County and others much farther south  and throughout the state of Colorado.

Boulder County was given the opportunity to protest the air traffic paths over them, recommending flights paths shift toward Gilpin County. Citizens Against Departure Noise (CADN) was the most populated voice of concern heard in the public Environmental Assessment forum offered by FAA’s NextGEN reconstruction plan for efficiency locally. CADN represented Boulder County, including Louisville, Nederland, Erie, and Boulder. Other communities in Colorado had little if any opportunity to voice concerns.

US Representative for Colorado’s District 2, Joe Neguse, began serving in 2019 along the Front Range from south of Denver to Wyoming, including Arapaho and Roosevelt National Forests. He supported CADN at the mid-April FAA Metroplex meeting in Boulder. Neguse successfully influenced the FAA to move the heavy air traffic routes out of Boulder County southward toward Gilpin before the June 6, 2019 public input forum closed for all of Colorado.

Gilpin Commissioner Gail Watson discovered the noisy, pressing conditions of air traffic encouraged toward  Gilpin from Boulder County in an article printed in Boulder’s Daily Camera. She quickly sent a letter to Denver’s Metroplex Draft EA a day before the closing of the public forum.

Ten days after Commissioner Watson’s letter of concern for all congregated (rather than evenly dispersed) air traffic over mountain communities, James Thompson of US Senator for Colorado Michael Bennet’s office reached out to the Gilpin County Commissioners to offer support to withstand the Metroplex proposal to move the Boulder traffic to Gilpin County.

County neighbors began to network and work together, having seen an increase in noise and air traffic over the last two years. That was only the beginning. A concentration of air traffic disturbing our peaceful forested mountains recovering from the mining days, threatens our investments in home or business as well as the National Forests and James Peak Wilderness Area. The bad dream was not just a dream.

After seeing FAA website maps and disclosures, GRRIFT saw that Gilpin County was becoming Boulder County’s alternative to air traffic noise pollution. Clearly, six air traffic lanes, partially from Centennial Airport are proposed to be moved to converge over Gilpin County, with engines accelerating to gain altitude over the mountains. Residents near Centennial Airport and other areas in Colorado are also seeking to stop the Denver Metroplex, working with their local officials and GRRIFT.

Planned flight paths constricted verses dispersed are recently as 2017 show the alarming concerns GRRIFT is responding to. These frightful map documentations came from the FAA and DIA Noise Office. The DIA noise and volume data may be helpful if the FAA’s data says the noise level is different than what residents have experienced.

Seeking strength in unity and numbers, over 100 GRRIFT members have collaborated of our 6,000 Gilpin County population. By researching the current data, documenting the decisions and seeking cooperation with government agencies and neighboring communities, best alternatives to all air traffic and communities below them can be realized. Gilpin Commissioners are working with this grass-roots group’s enthusiasm to ensure our quality of life.

The County Commissioners had prepared for the Metroplex work session by making contacts and communications to be guided and assisted by personnel in the offices of:

FAA deceitful strategies and a brief timeline of the miscommunications began to be understood with concerns and attempts to re-establish effective communication between Gilpin County and FAA’s NextGEN, Denver Metroplex Project.

Gilpin Commissioners responded to the concerns of Gilpin residents over the Metroplex plan to bring heavier air traffic over our community. BoCC action taken includes establishing this work session to hear concerns and present the initial letter to request more opportunities to communicate about these concerns with FAA representatives in Denver, and the North Western FAA Region.

Commissioner Ron Engels mentioned the extraordinary efforts both Commissioners Gail Watson and Linda Isenhart have availed to establish the facts as public servants regarding Metroplex in the Commissioner’s Board Room upstairs in the Old Courthouse on Eureka Street in Central City. So much emotional, historical, and environmental wellness appears to be disregarded by the FAA, who really were the target of the concerns presented to the commissioners preparing to bridge communication gaps for Gilpin County residents.

After sharing some of the responsive actions Gilpin’s BoCC has begun with the realized potential for heavier air traffic over Gilpin County, residents who had signed up to speak used the microphones to be heard. With approximately 25 GRRIFT members present in the room, concerns were clearly communicated.

Passionate appeals for help from our Commissioners were made by a core group of three representing Gilpin Residents Refusing Increased Flight Traffic (GRRIFT). Donna Parman, Teresa Wirth, and Lise Friis, each had their own perspective and eloquently presented the need to address this threat of increased air traffic over our community.

Some of the Commissioner’s work session closing comments recognized an apparent difference between what the FAA noise levels are recognized to be from what residents have recorded and demonstrated to exist. This is an area to be targeted for further understanding.

Gilpin County residents and Commissioners have demonstrated in this work session they all value the words found in Gilpin’s Commissioners Work Session:

“The Commissioners and all employees provide responsive services for our residents and visitors to protect, maintain and enhance our unique community, our historic and cultural heritage, and our mountain environment. We focus on health, safety and well-being, partnerships, community engagement, and effective use of public resources.”

END_OF_DOCUMENT_TOKEN_TO_BE_REPLACED

Benefitting the county, schools, and much more By Don Ireland   This year marks the 30th anniversary of casinos opening in the former little mining towns of Black Hawk, Central City and Cripple Creek, Colorado. In those early years, smoking was allowed inside ... END_OF_DOCUMENT_TOKEN_TO_BE_REPLACED