In unprecedented times, government goes on 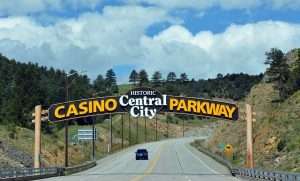 Council met with Staff for a work session prior to the regular meeting. The topics of discussion were speed limits on the Central City Parkway and economic development funding. A speed study was completed on the Parkway and Manager Miera presented the results which indicated that 85 percent of drivers are exceeding the 35 mph limit in the first mile of the Parkway with an uphill (northbound) average of 47 mph and downhill average of 42 mph. The Council was unanimous in their opinion that they should change the speed limit in the first mile. The Council also was given options for the remainder of the Parkway to seek more uniformity in speed limits versus keeping the speeds as they are currently posted. A Resolution will be presented to Council at a future meeting. Executive Director of the Business Improvement District Joe Behm addressed the Council stating that when the Parkway was originally constructed, engineers decided to set the limits “at a very conservative level” since the road would have no historical data to support higher speeds.

Director Rears addressed Council regarding appropriating funds for Economic Development, giving them several options, but also saying they may want to delay any appropriation due to the inevitable economic recovery due to the current crisis of the COVID-19 pandemic. Mayor Fey spoke for the Council saying they should delay action, then asked if any members disagreed, they should speak up. Alderman Jack Hidahl stated they should move forward with the appropriation of $100,000 for Economic Development since it was already been approved and it would show economic strength to potential partners. Alderwoman Johnson stated she would like to delay until another time. Alderwoman Laratta agreed. She stated that the casinos and businesses are taking a two-week “time-out,” the schools and everyone else is taking a “time-out,” and “I think spending money should also take a time-out.” Alderman Jeff Aiken mentioned he agreed with Jack (Alderman Hidahl), but also thinks they should not make any decisions tonight, but to delay a decision until the next meeting. Manager Miera informed Council that he and Finance Director Robbins have had several discussions on the economy of the near future and have asked all departments to look at their budgets in case they need to make some cuts, and the Council should prepare for the possibility of passing an amended and trimmed budget. The City does have a Reserve balance of about three-million dollars. Alderman Hidahl commented that an amended budget would not be necessary and that administrative cuts to a budget can happen without going through the budgeting process.

Mayor Fey did not lead in the Pledge of Allegiance as “there were no flags.” Alderwoman Johnson moved to remove Item #8, Resolution 20-11 regarding the acquisition of a pickup truck for the water department and replace it with an Ordinance 20-8 regarding adding emergency meeting procedures and was seconded by Alderwoman Laratta. The motion passed unanimously.

The Mayor called for a motion to approve the consent agenda which consisted of the minutes from the March 3rd meeting and regular bill lists through March 5th. Alderwoman Laratta moved to approve the Consent Agenda and was seconded, but the councilperson who seconded did not identify themselves on the teleconference. The motion passed unanimously.

Mayor Fey opened the floor to the public for anyone who wished to speak to a topic on the agenda. No one chose to address the Council.

Council considered an Ordinance that would change fees for fire suppression water lines.

Mayor Fey opened the Public Forum, but no one chose to address council.

Alderwoman Laratta moved to approve Ordinance 20-03 and was seconded by Alderwoman Johnson. The Ordinance passed unanimously.

The Council considered approval on four Ordinances and two Resolutions. This is the first reading of all Ordinances and a public forum and second reading will be made available during a future Council Meeting.

Assistant City Attorney McCormick introduced Ordinance 20-08 which declares a state of emergency and establishes rules and procedures for holding meetings of the Council. During a state of emergency, the Council can conduct official meetings via teleconferencing. This also gives the City more flexibility to respond to the needs of the public. Alderman Hidahl asked three questions and had one request: What model was used to create the Ordinance? Why is it extended to March 31, instead of April 8? Concerned about the broad authority given to the City Manager, will Daniel (Manager Miera) accept that responsibility? Uncomfortable with the Manager acquiring burdens that the City Council normally has, he would like assurance that any actions taken under this Ordinance be reported timely to the City Council. Attorney McCormick responded to the first two questions and the final request. The attorneys used the Town of Breckenridge’s declaration of emergency which provided the most flexibility for the City to address emergency issues as they come up. The extension was made in-line with other jurisdictions, but if Council wants to change to align with the next meeting, they can do that. Having the Manager timely inform Council about all actions taken is a reasonable request. Manager Miera reported he is willing to take on the responsibilities outlined in the Ordinance and is willing to provide written notice of any actions taken to Council. Alderwoman Johnson commented that she attended a meeting with the Gilpin Ambulance Authority last week and took that information to Staff and Council separately which resulted in the closure of City Hall to the public. Alderwoman Laratta commented they should extend the declaration of emergency to the April 8.

Without public comment, Alderman Hidahl moved to approve the first reading of Ordinance 20-08 with the second reading and public forum on April 7, 2020 and was seconded by Alderwoman Laratta. The motion passed unanimously. This Ordinance, due to its emergency status, takes effect immediately, but there will be a second reading within 30 days which allows for a public forum.

Alderman Aiken moved to approve the first reading of Ordinance 20-04 and set the second reading and public forum for Tuesday, April 7, and was seconded by Alderwoman Laratta. The motion passed four to one with Alderman Hidahl voting against.

Lori Strand, assistant to the City Attorney, introduced the first reading of Ordinance 20-05 which would repeal and reenact Article IX of Chapter 6 of the Municipal Code to implement new retail marijuana regulations and create a licensing system for marijuana hospitality businesses and sales. Hospitality marijuana establishments can be of two varieties; one which customers buy product at that location to consume; and the second, a BYOB (bring your own bud) for consumption.

Alderwoman Laratta moved to approve the first reading of Ordinance 20-05 and set the second reading and public forum for Tuesday, April 7, and was seconded by Mayor Fey. The motion failed with two to three; Alderman Aiken, Alderman Hidahl, and Alderwoman Johnson voting against. Mayor Fey commented that he believes the Council had already read these Ordinances and had a couple work sessions regarding these issues and that they were on board with bringing these to Council for consideration.

Lori Strand, assistant to the City Attorney, introduced the first reading of Ordinance 20-06 which would amend Chapter 16 of the Municipal Code regarding the Land Development Code to implement new marijuana land use regulations for research and development. Strand recommended removing this ordinance from the agenda since it relates directly to the failed Ordinance 20-05. Alderman Aiken then stated he wanted to reconsider his vote on Ordinance 20-05 as he did not understand that he was just voting to move the Ordinance to second reading and public forum. He stated he was interested in what the public had to say regarding this Ordinance.

Alderman Aiken moved to reconsider Ordinance 20-05 and apologized for his misunderstanding and was seconded by Alderwoman Laratta. The motion passed unanimously.

Alderman Aiken moved to approve Ordinance 20-05 and was seconded by Alderwoman Laratta. The motion passed three to two with Alderman Hidahl and Alderwoman Johnson voting against.

The Council then reviewed Ordinance 20-06 for consideration.

Alderwoman Laratta moved to approve the first reading of Ordinance 20-06 and set the second reading and public forum for Tuesday, April 7, and was seconded by Alderman Aiken. The motion passed three to two with Alderman Hidahl and Alderwoman Johnson voting against.

Director Rears introduced Ordinance 20-07 which would amend Chapter 16 of the Municipal Code to allow and regulate multi-use recreation trails as a limited use under the Land Development Code. Alderman Hidahl asked why the recommendation for limited instead of conditional use? Director Rears responded that the Planning Commission was comfortable with limited use. After some discussion, Council agreed to change the use from limited to conditional with approval given by City Council.

Alderwoman Laratta moved to approve the first reading of Ordinance 20-07 as amended and conditional and set the second reading and public forum for Tuesday, April 7, and was seconded by Alderwoman Johnson. The motion passed unanimously.

Alderwoman Laratta said “Central City should keep its lights on bright and I think we should continue to socially separate ourselves and everyone be safe and be careful.”

Mayor Fey stated that when he chose to move to Central City, he knew he wanted to be part of an active community and he has seen nothing but community effort considering the virus pandemic and he is proud to be part of this community. “We can be separated, but still be a powerful force together.”

Council moved to enter Executive Session at 9:07 pm for legal advice regarding potential amendments to the 1999 Growth IGA. The next regular Council Meeting will be Tuesday, April 7, 2020.

END_OF_DOCUMENT_TOKEN_TO_BE_REPLACED

Benefitting the county, schools, and much more By Don Ireland   This year marks the 30th anniversary of casinos opening in the former little mining towns of Black Hawk, Central City and Cripple Creek, Colorado. In those early years, smoking was allowed inside ... END_OF_DOCUMENT_TOKEN_TO_BE_REPLACED

Where the dead get to tell their story By Jaclyn Schrock On Saturday, August 21, the Gilpin Historical Society held their annual Cemetery Crawl. Tickets allowed the shuttle of hundreds of guests from the Teller House parking lot to the Cemetery. Depending on v... END_OF_DOCUMENT_TOKEN_TO_BE_REPLACED