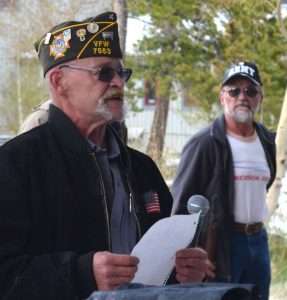 Memorial Day seems to be a time to celebrate a day off from work, with parades, barbecues, and sales. However, it is more important to observe the day’s true meaning – an occasion to pay tribute to the military veterans of the United States of America who gave the ultimate sacrifice.

Intermittent rain and pea-sized hail at a chilly 35 degrees did not halt Gilpin County’s Memorial Day ceremony on Monday, May 29, at 11:00 a.m. at the Gilpin County Community Center (GCCC). About 30 people had gathered, umbrellas in hand. The GCCC was closed for the holiday, so members of VFW Post 7563 had set up at the Veterans’ Memorial site near the GCCC entrance. A damp American flag and banners of Colorado, POW-MIA, and the VFW hung at quiet attention over the commemorative bricks and arrangements of red, white, and blue silk flowers.

At a few minutes before the hour, the dismal weather prompted a move under the building’s overhang, where folks could stay dry if not warm. Veterans shook the hail off of covers protecting the audio equipment so the strains of “God Bless America” could set a solemn and patriotic tone.

“We are deeply grateful for the inheritance of courage and valor of our veterans and their strength and fortitude that protected the freedoms of our nation,” she prayed.

“Thank you all for being here. The weather doesn’t matter; we are here to support our fallen comrades,” he said. “Let’s take a moment and acknowledge any among us who have lost loved ones in the line of duty. No words are adequate to give solace to military families in their grief. We are proud to honor those who bravely risked their lives in the face of danger. Let us give thanks to all who gave all.”

Blake noted that over one thousand veterans are buried each day in the United States, 22 in Colorado alone. These burials are not funded, he said, so service members and their families take care of the costs.

He also mentioned the debt owed to recipients of the Medal of Honor, the highest award for valor in action against an enemy force that can be bestowed on an individual serving in the armed services of the United States. It is generally presented by the President in the name of Congress. Over 3,500 Medals of Honor have been awarded since the decoration’s creation in 1861.

Dominguez returned to the microphone to relate that one of the bricks in the Veterans’ Memorial was placed for PFC Norman Dufresne, a member of the U.S. Army who served in Korea. Dufresne went missing in action in 1950. His remains were found in 1951 and DNA identified in 2013. Dufresne’s family still lives in Gilpin County, Dominguez said.

The veterans gave the traditional gun salute, followed by the playing of taps on recording and by accordionist Jimmy Stewart.

As the crowd bowed silently, Schrader closed in prayer.

“Heavenly Father, May we honor our freedoms and be ever ready to defend them. Please bless our country and our flag.”

She noted the significance of each color of the flag: red for courage, blue for bravery, and white for purity.

A few rays of sun pierced the heavy clouds as Dominguez dismissed with somber, heartfelt words: “The soldier in battle thinks of the people back home.”

Following the brief remembrance, Dominguez discussed a vision held by the VFW members, who have been searching for the past several years for land on which to put a VFW post. A donor has provided property in Central City, and Dominguez said if the City is willing, and if the members can earn the money, they may be able to build their post someday. He shared, however, that the VFW is short of funds at this time.

As a few teardrops of rain splashed down again, it was time to pack up the flags and stow the rifles, to take a few more pictures, and to cast a farewell glance toward the memorial honoring those who gave all.

Gilpin County and the Community Center dedicated the Veterans’ Memorial to recognize our troops and all our veterans. Please honor Gilpin’s brave service men and women by paying a visit to the site.

END_OF_DOCUMENT_TOKEN_TO_BE_REPLACED

Benefitting the county, schools, and much more By Don Ireland   This year marks the 30th anniversary of casinos opening in the former little mining towns of Black Hawk, Central City and Cripple Creek, Colorado. In those early years, smoking was allowed inside ... END_OF_DOCUMENT_TOKEN_TO_BE_REPLACED