In memory of Lela White Green 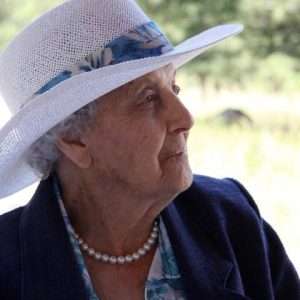 Lela White Green died on March 28, 2017 at Aria Park Assisted Living in Lakewood, Colorado. Lela was born on November 15, 1919 to Paul Revere and Anna Lee White the second of four children and the only daughter.

She rode horseback to attend grade school in Belcher Hill School at the foot of Mt. Tom, a one room schoolhouse two miles from her home. The teacher lived with the Whites during the school year and Lela rode double  with her teacher while in the first grade.

Lela attended Golden High School and one year of college at Colorado State University. When her freshman year was up, a neighbor by the name of Kenneth L. Green drove his truck to Fort Collins to take her home for the summer. And he never brought her back.

Kenneth was a veterinarian and a rancher, and his rugged mountain country life suited Lela just fine. After all, he had grown up on an adjoining cattle ranch and the families had been friends all her life.

She accompanied Kenneth on his calls. In addition to her housework, gardening and keeping the books, she helped repair fences, work cattle, and put up hay.

Lela managed to maintain an active community life with her staunch support for a variety of groups, grange, 4H, cattle men’s association, soil conservation, columbine extension club and the Colorado Republican Party. Lela loved the land. The more houses that dotted the landscape, the greater her concern for the disappearing pastures and what that meant for water and for wildlife. Her importance to her community was capped with her remarkable shepherding of two large land grants, one to Jefferson County Open Space (White Ranch) and the other to the State of Colorado (Green Holdings), Golden Gate Canyon Gate Park. Lela loved this area and rode horseback on many trails that now everyone can enjoy.

Kenneth and Lela lost their only child, Alan and his wife Judi, in a commercial plane crash. A non-profit organization was founded in 1983 by the family and friends of Alan Green. Throughout the years the Alan Green Memorial Foundation has given grants for numerous local organizations and students.

Lela is preceded in death by her parents, her brothers Melvin, Paul Jr. and George, her husband Kenneth, their son K. Alan and daughter-in-law Judi. She is survived by three grandsons Joel and his wife Martha of Evergreen, CO, Michael and his wife Montana of Warwick, RI, and Jeremy and his wife Yvonne of Watertown, MA. She took great joy in her six great-grandchildren, Kenneth Alan II, Noah, Nathan, Ari, Logan, and Silas.

END_OF_DOCUMENT_TOKEN_TO_BE_REPLACED

Benefitting the county, schools, and much more By Don Ireland   This year marks the 30th anniversary of casinos opening in the former little mining towns of Black Hawk, Central City and Cripple Creek, Colorado. In those early years, smoking was allowed inside ... END_OF_DOCUMENT_TOKEN_TO_BE_REPLACED