In “hawk heaven” with birds of prey 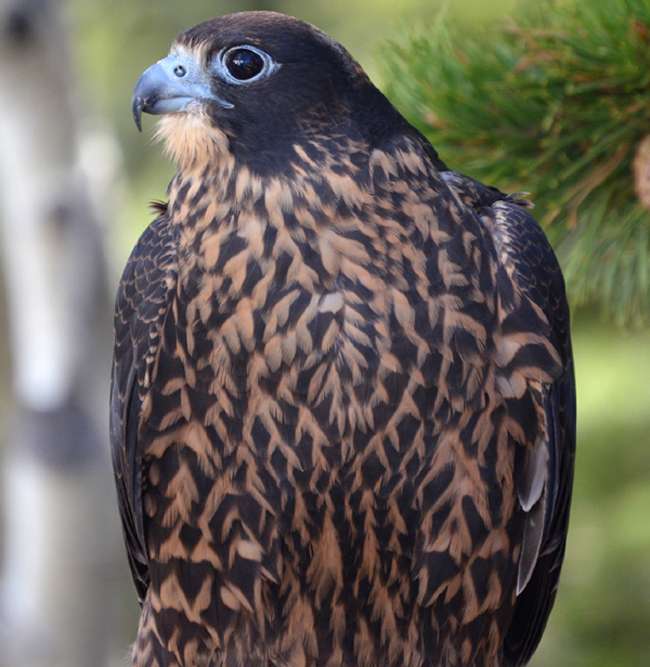 Many of us have seen a hawk perched in the top of a tall pine, or we’ve been startled by an owl that has swooped in front of our windshield. Perhaps we’ve been fortunate enough to spot an eagle as it soared in wide circles high in the sky. Seldom do we have the privilege of seeing one of these raptors for more than a brief glimpse.

However, last Saturday, October 21, a foursome of majestic birds of prey – a Harris hawk, a barred owl, a Peregrine falcon, and a bald eagle – visited Christ the King Community Church (CTK) in Gilpin County. Children, teens, and adults alike were thrilled to have the birds as special guests from HawkQuest, a non-profit group based in Parker. Master Falconer Kin Quitugua and three HawkQuest volunteers engaged the audience while educating them about birds of prey, or raptors. The program was meaningful and fun and encouraged respect for the land and the stewardship of all living things. The group’s possession and exhibition of the raptors was by permission of the U.S. Fish and Wildlife Service.

Kin explained how he first became interested in birds of prey. As a child growing up in Guam, he went to see a movie and was riveted by a scene where a hawk caught a pheasant in the air. From that moment, he decided that someday he would train birds. This posed a challenge, as there are no hawks in Guam. However, as a student at the University of Colorado, Kin met an art student who had a photo of a Red-tailed hawk. The art student knew someone who trained birds. Kin met with the man, who agreed to sponsor Kin in an apprentice program. He apprenticed for two years and worked for a total of seven years to become a Master Falconer.

Kin was in “hawk heaven” when he got his first bird, a Red-tailed hawk. He began to notice, however, that many birds of prey were in danger from the sometimes thoughtless and even cruel behavior of people. Birds of prey face many challenges in the wild, including shooting, pesticides, electrocution, and habitat encroachment.

“I decided that I needed to do something,” Kin said.

He found a calling when a teacher in Aurora asked him to come in and present his hawk to her fourth graders. They were fascinated. That led to more talks, and finally, Kin founded HawkQuest in 1986 to care for injured and imprinted birds and to educate the public. Last year, he and his volunteers presented to over one million people throughout the United States.

HawkQuest has a total of 35 raptors representing 21 different species. 50 volunteers are trained to handle and feed the birds. The group also has a veterinarian who provides medical care.

The birds come to HawkQuest from a federally licensed wildlife rehabilitation center. There are only five places in Colorado that do rehab with birds of prey.

Some of HawkQuest’s raptors are blind in one eye or have a bad wing and don’t fly. Others have imprinting issues, which occur when the bird relates to people as parents, rather than to its own species. This can occur when someone takes a bird illegally as a pet. Hunting is a learned behavior in birds, and they must be taught to hunt. The person who took the bird may let it go before it knows how to hunt.

Falconry requires total commitment, Kin says. “My job, like a farmer’s, is 24/7. I don’t get a day off, because the birds still have to eat.”

The raptors eat what they would consume in the wild. The owls like mice and rats, the eagles eat fish, and the hawks feed on mice and rabbits. Like the Denver Zoo, HawkQuest gets clean food supplies from a particular cottage industry.

“You need patience to work with birds,” Kin noted. “You must understand their nature. They are not pets. We do give them names, but we don’t use them in public so people don’t think of them as pets. We want the kids to go home knowing their proper names.”

For Kin, the most rewarding part of working with the raptors is that it is the closest he can get to nature. The relationship is not that of master to slave, but it is a partnership.

“You can fly them in the wild. They may come back, but they may not. The hardest part is getting them to trust you. Time is the key.”

The birds were transported in four kennels in a van for the CTK program; the eagle was housed in the largest-sized dog kennel made. Three HawkQuest volunteers handled the raptors: Jeff Falkel, Lee Ann Hug, and Susan Howard. The birds were kept in a partitioned area and brought out one at a time.

“This is the brightest of all birds of prey,” Kin said as he presented the dark brown Harris hawk, tethered and perched on Jeff’s sturdy left glove.

Notably, these “Wolves of the Sky,” as they are called by Native Americans, live in a colony, hunt together, and have a matriarchal society. Kin described how several of these birds have been observed standing on top of each other on a saguaro cactus, with the matriarch – the leading female – on top. The apparent purpose is for a better vantage point from which to spot prey. With its superior eyesight, the hawk can spot a jackrabbit from two miles away.

The beautiful barred owl was next on the program. Its soft, brown-and-white striped plumage resembled tree bark, and its large, doleful eyes made it an immediate favorite. The young owl was born only last spring. Kin explained that an owl’s eyes are 100 times more light-sensitive than ours. This one was blind in its left eye, affecting its depth perception.

Kin also corrected a common misconception: an owl cannot turn its head in a full circle. It has 14 vertebrae in its neck and can turn it 270 degrees. In comparison, humans have seven vertebrae.

The Peregrine falcon was introduced as the jet of the bird world and the mascot of the Air Force Academy, able to fly at over 200 miles per hour. It wore a hood over its head initially to help it stay calm. Both the falcon and the hawk were imprints.

The hawk returned next for a flight demonstration in the church sanctuary. As Jeff held the hawk, Kin donned his glove, got some food, and told the audience that he would signal the bird to come to him. The hawk crouched forward from its calm perching position to an alert readiness to take off. At the “go,” it zoomed across the room to Kin. The demonstration was repeated several times, to the wonder and delight of the audience.

The program climaxed with a visit from a bald eagle, which was also wearing a hood but quickly shook it off and fixed the audience with its intense gaze. The proud creature beat its powerful wings several times to show off its six-foot wing span. This eagle was blind in its right eye and had been scheduled to be euthanized before coming to HawkQuest.

“An eagle can live up to 30 years in the wild or nearly 80 years in captivity. It’s ten years old now,” Kin said, “so it will outlive me.”

Kin kept the audience spellbound with captivating raptor facts and humorous stories. He also selected several eager audience members to serve as volunteers throughout the presentation. One child played a role as a mouse to help demonstrate owl triangulation, where the owl uses sound to locate its prey. Others held silhouettes of the birds to show wing span, size, and scientific names. A couple of adults demonstrated flight patterns by flapping their arms. Kin kindly invited family members to take a photo of the audience volunteers with the various birds.

He concluded his message by encouraging everyone to help the environment by simply picking up one piece of trash every day and asking one other person to do so. Everyone came away with a new knowledge and respect for these amazing birds of prey and ideas to help take care of God’s creation.

The presentation was followed by a fall harvest party for the children, with games, candy, and prizes.

END_OF_DOCUMENT_TOKEN_TO_BE_REPLACED

Where the dead get to tell their story By Jaclyn Schrock On Saturday, August 21, the Gilpin Historical Society held their annual Cemetery Crawl. Tickets allowed the shuttle of hundreds of guests from the Teller House parking lot to the Cemetery. Depending on v... END_OF_DOCUMENT_TOKEN_TO_BE_REPLACED