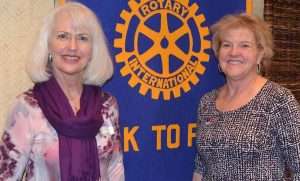 “There’s no app to replace your lap.” Read to your child every day.

This was the message heard by the Peak to Peak Rotary Club, which met on Thursday, February 21, in Farraddays’ Steakhouse at the Isle of Capri Casino in Black Hawk. Members heard a report about an intriguing early childhood literacy project, the Mountain Area Imagination Library.

Member Anne Schafer introduced speaker Marianne Temple, a member of the Evergreen Rotary and a retired early childhood development director with Jefferson County. Temple is the coordinator and organizer of five Mountain Area Rotary Clubs involved in the Imagination Library literacy project — Evergreen, Conifer, Mountain Foothills, Peak to Peak and Clear Creek 2000. It is unique in the Rotary district to have five clubs supporting one project.

It was Temple’s goal in coming to the Peak to Peak Rotary meeting to promote this project more in the Gilpin community and to request that each Rotary member become a spokesperson.

The idea is that once children learn to love reading, they will continue to read as they get older. Kids who have books in their home and are read to regularly have better vocabularies and are more likely to succeed.

When the children receive their much-anticipated book in the mail each month – with their name on it – they get excited to have it read to them, forming a bond with their parents and inspiring a love for reading. When parents read regularly to their child during preschool years, they give their child a big boost towards a successful education.

Temple played a brief YouTube video to the Rotary members. In the video, Parton commented, “The kids call me ‘The Book Lady.’ When I grew up, my dad couldn’t read or write, and we had no books in our house. Through the Imagination Library, I feel like I’ve done something good with my life.”

At first, books were only distributed to children living in Sevier County, Tennessee, where Dolly grew up. It became such a success that in 2000 a national effort began. By 2003, the DPIL had mailed one million books. To date, many millions of books have been sent to children around the world, including multiple locations in the United States, Canada, the United Kingdom, Australia, and the Republic of Ireland. According to the international website www.imaginationlibrary.com, the 100 millionth book was dedicated to the Library of Congress in 2018.

Here’s how the program works. Each month, a new book is mailed to every enrolled child. Parents agree to read to their child regularly. Children may be enrolled from birth to age five, at which time they graduate from the program. Families don’t have to be considered “at risk” to participate.

The five Rotary Clubs named above are the funding sponsors, or “Champions,” of the Mountain Area Imagination Library (IL) and spend about $28 per child per year in funding. The program is offered to any preschool-age child that lives in certain designated mountain zip code areas. A registration link to the local program is listed on www.imaginationlibrary.com. Parents enter their mailing zip code to see if they live in one of the covered areas. Enrolled children can live in Gilpin, Clear Creek, Jefferson, and Park Counties within the designated zip codes.

If someone wants to enroll, say, a grandchild who lives in another part of the country, they visit the website, enter the zip code, and see if the child lives in an area where the program is available.

215 children are covered by Mountain Area IL; the total in Colorado is 12,350, according to the DPIL website.

The project is geared to this generation of young parents, many of whom put electronic devices into their child’s hands instead of reading to them.

“This is detrimental to a young child’s brain development,” Temple said. “Children need that physical bond with their parents. You should even read to a baby. It’s just like talking to them.”

She shared a situation where she was trying to engage a three-year-old with a picture book. The little one came from an affluent family who didn’t read to the child.

“This preschooler didn’t know how to turn the pages,” Temple said in disbelief. “He was trying to manipulate the pages like an i-pad screen.”

Temple told of “Teagan,” the Mountain Area’s IL poster child. Teagan and her parents live in Evergreen, and she graduated from the program last August, just before entering kindergarten. Teagan’s parents testify that their little girl loves books because of being in the IL program for three years. Temple said the Evergreen Rotary has partnerships with a dozen preschools in the area, and a preschool director had given the family a flyer about the IL.

Temple had met the little girl at an IL event in an Evergreen park.

“I wore my Dolly Parton costume. Teagan was so excited to meet me. To her, I was Dolly. She hugged me and thanked me for all the books. After Teagan received the books, her dad joined Rotary. More young parents are doing that – it’s a win-win.”

Temple had some business cards made up to hand out to parents, which listed the IL website where parents could register their children and noted the sponsorship by the Mountain Area Rotary Clubs. She reported that the Gilpin County Library has brochures available about the program and suggested that the preschool programs at Gilpin County School could begin publicizing the IL.

“The best way for families to learn about our program is through word of mouth — from us in the Rotary Clubs and from others who have their children enrolled in the program,” Temple stated.

As the word has spread, others are looking to get on board. Temple was enthusiastic to report that one of the seven Rotary Clubs in Colorado Springs had contacted her, saying those clubs wanted to copy the Mountain Area project.

Interested people are invited to become financial sponsors of the project. Literature provided by Temple states that donations to the Mountain Area IL are 100 percent tax deductible. Contributions should be made payable to the Evergreen Rotary Foundation with “Imagination Library” in the memo line and mailed to Rotary Imagination Library, P.O. Box 4143, Evergreen, CO 80437.

END_OF_DOCUMENT_TOKEN_TO_BE_REPLACED

Benefitting the county, schools, and much more By Don Ireland   This year marks the 30th anniversary of casinos opening in the former little mining towns of Black Hawk, Central City and Cripple Creek, Colorado. In those early years, smoking was allowed inside ... END_OF_DOCUMENT_TOKEN_TO_BE_REPLACED