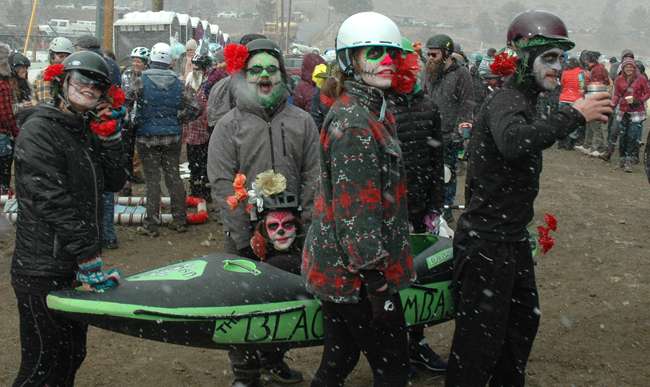 Driving into Nederland, CO on Saturday, lines of cars were parked along the highway for a mile leading into town. If you didn’t know already, the 17th annual Frozen Dead Guy Days festival was taking place, and there were throngs of people for as far as you could see from Hwy 119 all the way down to Guercio Park by Barker Reservoir, and on every other highway leading into town from Boulder and Estes Park. Finally locating a parking spot, I parked the Jeep and strolled down East 1st Street, taking in all the sights and sounds. Even with the falling snow and chilly temps, there were poets espousing prose from makeshift stages, frozen turkey bowling in the street, beer tents and live music along both sides, and interesting people of all ages and walks of life to talk to. Young families had their kids in strollers, while other couples walked along with their dogs. There were plenty of uniformed officers helping folks with traffic, and ensuring that alcohol consumption rules were being followed. Passing the chainsaw art vendor area, we were enticed to stop and check out all the great art created from trees – far surpassing the typical touristy type of bears. Making my way on down to the park, there was a large arena circled with vendor wagons and many types of tasty food and frosty beverages, as well as live bands playing in heated tents. Once past all that, you could hear the roar of the crowds as costumed individuals braved the icy waters of the Polar Plunge. Immediately following that watery fun, the coffin races started, with many costumed teams entering, and bystanders were packed in 6-10 people deep all the way around the race course.

Thousands came from near and far came to participate in three frosty fun-packed days featuring a parade of hearses from the Denver Hearse Association, 30 live bands in large heated tents, more Colorado craft beer than you could drink, coffin toting teams racing around an obstacle course, a costumed Polar Plunge into icy water, a frozen t-shirt contest, frozen beard and brain freeze contests, frozen turkey bowling, chainsaw art, and all kinds of tasty food from a wide variety of vendors. FDGD’s is known as one of the most unique and quirky festivals in the country and continues to be a world-renowned spectacle. The home-grown frosty fest pays homage to Bredo Morstoel, a Norweigan who was frozen solid by his grandson in 1983 in a bizarre cryonics experiment and now chills out in a metal coffin packed in 1,500 pounds of dry ice in a Tuff Shed located high above Nederland.

The event caught worldwide attention when Grandpa Bredo’s granddaughters created a short documentary film called “Grandpa’s in the Tuff Shed” which was entered it in film festivals, and is shown at the festival. After the first film, award winning documentary filmmakers, Robin, Kathy and Shelly Beeck, with the help of filmmaker Michael Moore, spent five years filming a 60-minute feature-length documentary title “Grandpa’s still in the Tuff Shed.” The grandson, Trygve Bauge, has long since been deported back to Norway, but Grandpa Bredo has remained, unwittingly becoming a worldwide symbol of the legal rights of the temporarily dead.

In 1989, a Norwegian citizen named Trygve Bauge brought the corpse of his recently deceased grandfather, Bredo Morstøl, to the United States. The body was preserved on dry ice for the trip, and stored in liquid nitrogen at the Trans Time cryonics facility in San Leandro, California from 1990 to 1993.

In 1993, Bredo was returned to dry ice and transported to the town of Nederland, where Trygve and his mother Aud planned to create a cryonics facility of their own. When Trygve was deported from the United States for overstaying his visa, his mother, Aud, continued keeping her father’s body cryogenically frozen in a shack behind her unfinished house.

Aud was eventually evicted from her home for living in a house with no electricity or plumbing, in violation of local ordinances. At that time, she told a local reporter about her father’s body, and those of two other individuals, and the reporter went to the local city hall in order to let them know about Aud’s fears that her eviction would cause her father’s body to thaw out.

The story caused a sensation. In response, the city added a broad new provision to Section 7-34 of its Municipal Code, “Keeping of bodies,” outlawing the keeping of “the whole or any part of the person, body or carcass of a human being or animal or other biological species which is not alive upon any property.” However, because of the publicity that had arisen, they made an exception for Bredo, a “grandfather” clause. Trygve secured the services of Delta Tech, a local environmental company, to keep the cryonic facility running. Bo Shaffer, CEO of Delta Tech, was known locally as “The Iceman” and caretaker responsible for transporting the dry ice necessary for cryopreservation to the IC Institute, something he has done since 1995. In that year, the local Tuff Shed supplier and a Denver radio station built a new shed to keep the body of Bredo in. In the fall of 2012, Jane Curtis Gazit and Mike Wooten, took over as Bredo’s caretakers, but they passed caretaking duties to Brad Wickham, a resident of Nederland, who is the current caretaker. In honor of the town’s unique resident, Nederland holds an annual celebration, first started in 2002.

END_OF_DOCUMENT_TOKEN_TO_BE_REPLACED

Where the dead get to tell their story By Jaclyn Schrock On Saturday, August 21, the Gilpin Historical Society held their annual Cemetery Crawl. Tickets allowed the shuttle of hundreds of guests from the Teller House parking lot to the Cemetery. Depending on v... END_OF_DOCUMENT_TOKEN_TO_BE_REPLACED