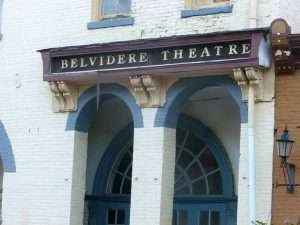 Central City’s historic Belvidere Theatre was just named one of four sites on Colorado Preservation, Inc.’s (CPI) Most Endangered Places List for 2016. The announcement came during a luncheon held on February 4 at CPI’s 19th annual Saving Places Conference, which coincided with the 50th anniversary of the National Historic Preservation Act. The conference ran from February 3-6 at the Denver Convention Center.

Newly listed endangered sites are announced each year at the conference, which is the largest statewide historic preservation conference in the country.

The other three sites chosen were the Great Western Sugar Factory in Brighton (built 1916), the Tabor Opera House in Leadville (built 1879), and the Glen Huntington Bandshell in Boulder (built 1938).

“We have selected four unique sites that represent some of Colorado’s earliest history and industries,” stated Jennifer Orrigo Charles, who is CPI’s Most Endangered Places Program Director. “These places tell the story of our state and its people. They are the backbone of our Main Streets and heart of our traditional neighborhoods.” Charles said the collective impact of Coloradans’ efforts to preserve these historic places is a legacy for future generations.

CPI and How It Will Help

One of CPI’s main functions is to assist people in getting grants to fund the restoration of their historic sites, rather than to fund the sites directly. However, having a site named to CPI’s list is an honor. “It’s about publicity, getting the word out that there is this special place, and being recognized by the state that they agree with us. This designation will only assist us in obtaining additional funds to bring the Belvidere back to the community,” stated Community Development Director Rears.

For the past 19 years, the Endangered Places Program has provided assistance and advocacy for significant historic sites throughout Colorado that are in danger of being lost. During that time, the program has highlighted 110 historic sites throughout the state. 39 sites have been designated as “saved” and only six have been “lost.” More than 60 others are “in progress” or “on alert.” The program is paid for in part by a History Colorado State Historical Fund grant.

Sites on CPI’s list are located in every region of the state in 49 of Colorado’s 64 counties. There is a wide variety of locations that are representative of Colorado’s historic places, such as Native American sites, historic farms and ranches, railroad depots, schools, commercial districts, private residences, and historic neon signs.

Each of the 30 plus sites considered by CPI for 2016 had to be nominated to be considered. Main Street Central City, a Colorado Main Street Program, completed its application with CPI in August 2015 and was informed of the Belvidere’s selection last October, according to MSCC Coordinator Thielemann. The selection had to be kept confidential until last week’s announcement.

A lot of work went into presenting the Belvidere for consideration. Historic and present photos were collected and a CBS4 documentary was put together featuring brief videos and various perspectives on the site. Participants in the documentary included Gilpin County Manager Roger Baker, City Community Development Director Rears, Alderman Kathy Heider, resident and former City Manager Jack Hidahl, and MSCC Coordinator Thielemann. CPI’s Jennifer Orrigo Charles said the documentary was shown during the announcement and will run as a CBS special, perhaps in March.

The selection process is fairly involved, Charles advised. With each nomination, CPI assigns a preservation professional who is not connected to the site but is from the site’s region. Seven regional meetings are held during the year, and a presentation is done on each site. CPI conducts research to confirm that the site is indeed threatened. Then, there is a statewide meeting where all representatives present a second time, and a committee ranks the sites based on the level of community support. The final decision is made by CPI staff and board members. Sites not selected may be nominated again. Charles noted that the Belvidere has been nominated at least three times.

She said, “We will make every effort to move the category to ‘in progress’ in 2017.  We have a very dedicated team to move the ‘B’ forward.”

The Belvidere, located at the south end of Main Street in Central City’s National Historic Landmark District, was originally constructed after Central City’s Great Fire of 1874. As constructed, the two-story brick building had business space on the main floor and a 450-seat performing space with a raised stage on the second floor. Over the years, the building played many roles as it housed fine theatrical productions, Beaman’s Central Bottling Works, various retail outlets, the National Guard Armory Hall, the Central City Garage, a school basketball court, and more. The property eventually fell into disuse and closed in 2002.

The Belvidere was privately owned until Gilpin County took title in June 2015 for non-payment of back taxes. The County immediately submitted an application to the State Historic Fund for a Historic Structure Assessment grant. This fund is administered by History Colorado and entirely funded with gaming taxes, advised County Manager Baker. The application was funded, and the firm of Slatterpaull-Hord-Coplan-Macht was awarded a contract to do a historic structure assessment.

Baker noted, “We have yet to see the final report, but expect it shortly. I think once that document is received, the County and City can talk about next steps.” Gilpin County’s goal is just to safeguard the building, since it was apparent that the owner was not going to do any maintenance, Baker said.

Ideas for the Belvidere

The Belvidere Steering Committee and MSCC have discussed many possible uses for the building, with the general consensus being a community center. Community Development Director Rears noted that ideas range from new theater productions in partnership with the Central City Opera or separately from the Opera, an event center for weddings, graduation parties and the like, a dinner theater, or an artist gallery.

No work has started yet, but when the structural assessment is completed, it will give everyone an idea of what will be needed to bring the Belvidere back to its old glory, Rears stated. Planning is in the works for fundraising, including donations, grants, and in-kind services.

“We will pursue all avenues to fund the rehabilitation and adaptive reuse of the Belvidere, so that we again can have a downtown community gathering space for all ages and families in our unique community,” informed Rears. “Due to gaming, such spaces are extremely limited in our city core, which would normally be a community gathering center.”

How You Can Help

MSCC is soliciting past photos, memorabilia, and stories of the Belvidere, and the “Save the Belvidere” campaign is receiving funds for restoration at P.O. Box 1072, Central City, CO 80427-1072.

The City is also accepting donations to help fund this effort. A “Go Fund Me” account can be found on this link: www.gofundme.com/ndnqmsmk.

END_OF_DOCUMENT_TOKEN_TO_BE_REPLACED

Where the dead get to tell their story By Jaclyn Schrock On Saturday, August 21, the Gilpin Historical Society held their annual Cemetery Crawl. Tickets allowed the shuttle of hundreds of guests from the Teller House parking lot to the Cemetery. Depending on v... END_OF_DOCUMENT_TOKEN_TO_BE_REPLACED