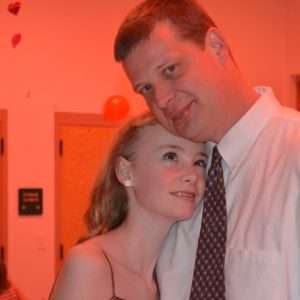 Move over, Fred and Ginger. The dads and daughters at the ninth annual Sweetheart Ball at the Gilpin County Community Center could have danced all night…and they did. These enthusiastic pairs could really trip the light fantastic.

Sixty five girls ranging in age from two up to thirteen were registered with their fathers for the February 9th event. A number of them had been to the event every year since they were old enough to stand. Fathers and daughters alike agreed that their favorite part of the evening was simply spending time together. The daddy-daughter duos obviously had a “ball,” and it was sweet to see the affection the pairs had for one another.

The daughters were every bit the beautiful and sweet princesses who inspired pride in their fathers. The young ladies were dressed to the nines in their most elegant gowns of red, pink, purple, or white. Just for this special evening, their hair was curled and dusted with glitter, their nails were polished, their lips glossed. Most of the mountain men dads were also resplendent in button-down shirts and ties, even tuxes, some matching their daughter’s colors.

Community Center staff had outdone themselves to make the evening as elegant as a young girl’s heart could desire. They had bathed the “ballroom” (multi-purpose room) in a rosy glow from red tissue-covered lights and tastefully decorated the tables with foil heart centerpieces on red tablecloths. Fabric bunting was draped from a large crepe paper bouquet in the center of the ceiling, which stirred gently in a faint breeze. Tangerine-hued balloons gently bumped against small feet, inviting the youngest dancers to a game of “hot potato.”

Dads and daughters swung each other around the floor, doing every move from the foxtrot to hip hop to a conga line. Preschool sweeties joined hands in ring-around-the-rosy, and a few young elementary girls showed off their version of break dancing. Partners strutted their stuff to a mix of country and classic rock. Everywhere, girls hugged their fathers and dads gazed warmly at their laughing, twirling young sweethearts.

To commemorate the special evening, each girl received a goody bag that contained a stuffed animal, balloons, and a tea light candle with holder. The candle holder was imprinted with “Sweetheart Ball 2013.” Community center director Kathi Lambert said some girls have quite a collection of the little holders from past years.

Since dads are eager to show their girls a good time, but aren’t always sure what to do, the Center staff supplemented the dancing with clever crafts. Several father-daughter teams decorated paper tiaras for the girls to wear with their gowns, or made hearts from crayon scratch art.

Robert Ruwaldt was there with his daughter Langley, age 10, who advised that the crafts were the most fun part of the evening. “I love to draw,” she said.

For dad William and his daughter Alexia, age seven, dancing together was the highlight of their time together. Alexia loved “dancing and hanging out with my dad.”

Mike McLaughlin brought his two girls, Kyleigh, age six, and Rory, age two. This was Rory’s first time at the ball, but Kyleigh had been to the event with her father three or four times before. McLaughlin’s favorite part of the event was getting a chance to dance with his girls.

Skyley Ramsey, age seven, attended the ball with her dad Lee. Her two older sisters had beautifully styled her hair in long waves for the occasion.

Dad Chris Turner was resplendent in a tux, with daughter Hayley, 12, “spending quality time together.”  A smiling Turner said Hayley’s mom got some “me time” for the evening by going out to dinner with friends.

The cost for the ball was $18 per couple, with $7 for each additional sweetheart. The money collected for the Valentine’s event and the Winter Arts Festival from December 2012 will be used to cover the costs for this year’s Easter and Halloween events.

END_OF_DOCUMENT_TOKEN_TO_BE_REPLACED

Where the dead get to tell their story By Jaclyn Schrock On Saturday, August 21, the Gilpin Historical Society held their annual Cemetery Crawl. Tickets allowed the shuttle of hundreds of guests from the Teller House parking lot to the Cemetery. Depending on v... END_OF_DOCUMENT_TOKEN_TO_BE_REPLACED